Poach the Tiger Poachers Policy Seen as Extreme but Necessary 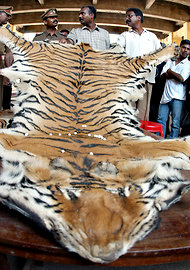 Babu/ReutersPolice officers display a tiger’s hide confiscated from a group of smugglers in Chennai, Tamil Nadu, in this June 26, 2004 file photo. Officials said the estimated cost of the hide was $54,000.

Forestry officials say they plan to arm guards and protect them from prosecution, regardless of any potential concerns from human rights groups. “Human rights groups come in the way if there is any such action, but there is [a] need to save the tigers,” Patangrao Kadam, the Maharashtra forest minister, told the Indian Express.

The move was prompted by the death of five tigers in the last five months due to poaching.

The National Tiger Conservation Authority has also directed all states to treat each tiger or leopard death as a poaching case unless proven otherwise beyond a reasonable doubt. “As tiger areas are targeted by poachers and tigers are becoming victims of non-targeted killings due to sensitive tiger-human conflicts, there is need to ensure adequate caution while classifying tiger deaths as occurring due to “natural” causes,” said Rajesh Gopal, member secretary of the group.

The Maharashtra forest ministry has sanctioned 70 additional armed guards for the Tadoba tiger research program and 90 armed guards for the Pench Tiger Reserve, both in Maharashtra, the Press Trust of India reported. In addition, forestry offices have been provided with 100 jeeps while a reported “secret fund” of 5 million rupees, about $90,000, has been sanctioned to pay informers for tipping forestry officials about smugglers or poachers.

The forest minister also said an inquiry will be ordered into two tiger deaths in the district of Chandrapur where the tigers were caught in a steel trap. An “inquiry has been instituted to find out whether they died because of poaching or were electrocuted,” he said.

Forestry guards actually have been empowered to shoot poachers on sight since 2002, a separate Times of India article notes, but they have been reluctant to use weapons, as they are concerned about being arrested. A lack of training has been part of the problem, the article notes: only 1,000 field staffers of a total of 11,000 employees of the department have been trained in using weapons.

The Wildlife Protection Society of India says 14 tigers have been killed in India since January, of which eight were poached in Maharashtra alone, the BBC reported. 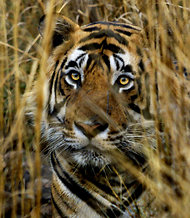 J. Scott Applewhite/Associated PressAn Indian tiger looks out from a camouflaged cover of strawgrass in the Ranthambore National Park, Rajasthan in this March 23, 2000 file photo.

While a century ago there were an estimated 100,000 tigers in India, a 2011 census counted 1,706 tigers in the wild. However, the BBC did note that the forest minister’s solution would raise legal concerns and opposition from rights groups, and said other officials have tried to play down the forest minister’s remarks saying shooting poachers would be a “last resort” solution.

Tiger poachers have yet to be shot in Maharashtra, the state’s chief wildlife warden, S.W.H. Naqvi, told The Associated Press, but the shooting of illegal fisherman has led to charges against forestry guards.

“These poachers have lost all fear. They just go in and poach what they want because they know the risks are low,” Divyabhanusinh Chavda, head of the World Wildlife Fund in India, told The Associated Press. “A similar measure allowing guards to fire on poachers in Assam has helped the northeast state’s population of endangered one-horned rhinos recover,” The AP reported.

Forestry officials “have had to do something because they have lost a series of tigers in this area and the poachers are acting with impunity,” Belinda Wright, head of the Wildlife Protection Society of India told The Independent.

Perhaps the only place to highlight the potential human rights problems this new push could pose is the media analysis Web site Gawker, which wrote that Indian officials must have been inspired by the 1924 short story “The Most Dangerous Game,” by Richard Connell. (In the story, a jaguar hunter who falls off a boat washes ashore on an island owned by a deranged man who hunts humans for sport.)

“If you hate killing animals but love killing people, Maharashtra just might be your scene,” Gawker said. By NEHA THIRANI

Join Tiger Nation to Save Tigers

Join Tiger Nation to Save Tigers