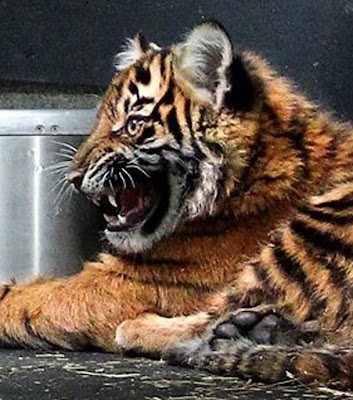 Mali, the endangered Sumatran tiger cub who nearly died two weeks ago from an intestinal blockage, growls her greeting during a recent photo session.

Mali, an endangered Sumatran tiger cub at Point Defiance Zoo who nearly died two weeks ago from a intestinal blockage is recovering nicely — you might even say ferociously — from surgery to remove the blockage followed by her heart stopping.

She’s got heat and light. A blue plastic ball to play with. And around-the-clock care.

And according to staff at Point Defiance Zoo & Aquarium, the endangered Sumatran tiger cub who nearly died two weeks ago is recovering nicely — you might even say ferociously — from surgery to remove an abdominal blockage.

She’s also got a burgeoning fan club with dozens of Facebook posts, prayers, e-mails and letters from humans wishing her well.

“I hope you survive our whole life,” said 6-year-old Harvest, her message included in a packet of drawings and accompanying thoughts sent to the zoo by Jennifer Roberts at the Cradle to Crayons Child Care Center in Olympia.

Mali, though still getting daily doses of phenobarbital to prevent seizures, gets up and noses around her padded enclosure, heartily eats the 3 pounds of ground up cow (virtually every part, including bones) and diced beef chunks she gets daily, her keepers said.

And perhaps the most tiger-like behavior of all: If someone comes near her hospital bed of straw scattered on a stall mat, her mouth snaps open. You can see the points of her fangs and hear the deep growl emanating from deep inside.

On Wednesday, she did all of that lying down, looking a bit lethargic 10 days post-op, but no more than a human might after major abdominal surgery followed by cardiac arrest that briefly starved her brain of oxygen.

“We’re all pretty stoked at her progress,” said senior staff biologist Paul Povey, who oversees the Asian Forest Sanctuary exhibit that’s home to Mali, her littermate, Bima, mom Jaya and dad, Bali. “If she were on exhibit, you wouldn’t know anything was wrong,” he added, pointing out that tigers often regally lounge about as the top-of-the-food-chain predators they are.

Mali has reached some landmarks in her recovery.

“She started telling us she was getting better,” head veterinarian Karen Wolf said.

And how does a tiger tell you she’s feeling stronger?

She hooked her paws over the top of a board that’s part of her hospital enclosure, hung her head over the top and growled, Wolf said. All signs indicate the initial wobbliness is past, and her motor skills seem intact.

Zoo keepers enlarged the space and stopped hand-to-tiger contact; she gets her medicine in her food now, the staff safely separated from the 50-pounds-and-growing cub.

Doctors are hopeful Mali will regain all of her vision; she was temporarily blinded as a result of the brain trauma. But her behavior shows she’s focusing her attention on sounds, lights and shadows, Wolf and Povey said.

“We’re definitely optimistic it will come back, but it’s impossible to tell at this point whether she’ll get back to 100 percent,” Wolf said of the tiger’s eyesight.

“The neurologist saw her early this week, and he was very pleased,” she added.

“She’s had no seizures. Every day, she’s had huge improvements.”

Mali and brother Bima have been internationally celebrated since their birth at Point Defiance May 25. They’re among only 74 Sumatran tigers living in captivity in North America. There are only about 500 of the critically endangered species worldwide. So zoo staff members held their collective breath when they discovered Mali, at nearly 6 months old, extremely lethargic, her abdomen distended and taut, the morning of Nov. 15.

Emergency surgery performed by zoo veterinarian Holly Reed with a full O.R. team revealed pieces of bone blocking the lower portion of her stomach, preventing food from moving along her digestive tract. The culprit bones are a normal part of a tiger’s diet, zoo officials said.

They describe a tightly focused and orchestrated operation followed by optimism, then more tense moments when Mali suffered cardiac arrest and needed resuscitation hours after surgery.

Maya suffered hypoxic-ischemic encephalopathy, in long-worded medical terms. In short, her brain didn’t get oxygen for a brief period, there was a bit of seizure activity, and it will be some time before veterinarians and zoo staff know what her long-term medical health will be.

“We don’t know if any of her memories will be affected,” Wolf said of whether Mali is missing the mother and brother with whom she lives.

“The first couple of days, Jaya was one angry tiger,” stalking around her habitat, “exhibiting aggressive behavior to just about everyone,” Povey said.

Dad Bali wouldn’t be missing his girl, though he lives in the habitat next door to mom and the cubs. Male tigers don’t take on paternal duties.