Ralph Boggie’s cat Yoda as seen after being attacked by a bobcat last week.

Ralph Boggie, of rural Tower, heard a commotion outside his front door one afternoon last week. “It sounded like a cat screaming,” he said.

When he looked out the window, he was shocked to see his pet cat Yoda in the jaws of a bobcat.

“The bobcat had him by the head and was starting to carry him away,” said Boggie, who quickly ran outside in an effort to save his pet. While the approach of a human might normally send a secretive bobcat running, in this case the animal hung on to its intended prey, forcing Boggie to kick the animal to free his pet.

And even then, the bobcat didn’t retreat very far, said Boggie. “It stood back and hissed at me,” he said. The animal eventually retreated into the back of Boggie’s garage, taking refuge in the sauna built into one corner of the building.

Boggie recovered his cat, which had suffered serious wounds to its face, and brought it back inside, where he grabbed his .410 shotgun, came back out and shot the bobcat. “It was a beautiful animal. I hated to shoot it, but I couldn’t have it eating my cats,” he said.

Homeowners are allowed to protect their property from wild animals, notes Conservation Officer Dan Starr. In this case, Boggie reported the incident to the DNR shortly after it happened.

The bobcat’s actions were unusual, notes Steve Loch, a wildlife biologist who is very familiar with wildcat behavior. “You don’t hear of this kind of thing for long stretches, but under certain conditions, things like this do happen,” he said. Loch notes that animals can act in unusual ways when stressed by hunger.

But it’s unclear if starvation was the issue in this case. According to Starr, the young male bobcat appeared healthy. “It didn’t seem like it was starved. It’s eyes were clear and it’s fur was in prime condition,” he said.

Starr took custody of the animal carcass. He said the pelt will be tanned and used for educational purposes.

Meanwhile, Boggie said his pet is starting to recover. “On Saturday, I thought he was going to die, but now it seems he’s coming around. 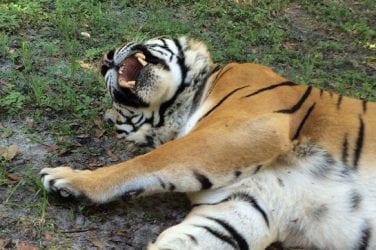