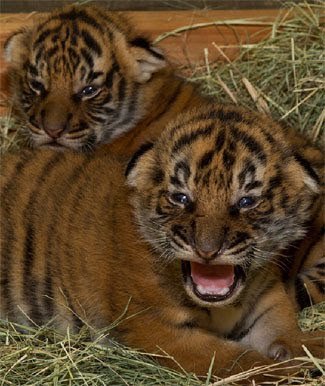 A pair of just over 2-week old Malayan tiger cubs at the San Diego Zoo have recently opened their eyes.

The still nameless cubs, who weighed 7.7 pounds as of the weekend, are expected to go on dispaly when they turn three months old. They were born on April 2 and are rapidly gaining weight, said Rochelle Willison, Senior Keeper at the San Diego Zoo.

“Currently they have their eyes open. They’re crawling around,” Willison said. “Within the next two weeks they’ll probably learn to start walking a lot better and crawl out of the nest box. By about two months they’ll be running all over the place and by three months mom will have a handful and we will probably put them on exhibit a little bit after that.”

The cubs can only see shadows at this point, sleep most of the day and are completely dependent on their mother, 12-year old Mek Degong.

“There are only about 500 Malayan tigers left in the wild. That’s why it’s critical to help save the species,” she says.

Mek Degong has had a total of 7 cubs, according to zoo spokeswoman Yadira Galindo. There are three adult cubs and the two newborns at the zoo at this time.

The other cubs have been sent to institutions belonging to the Association of Zoos and Aquariums’ Species Survival Plan, Galindo says. The program helps find the “best genetic match” for pairing and procreation.

The San Diego Zoo has had Malayan tiger cubs since 1992.