Save the Canada Lynx 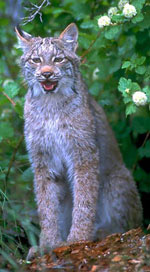 After languishing for eight years on the Endangered Species list with little to no protection of its habitat, the Canada lynx won big yesterday when the U.S. Fish and Wildlife Service designated nearly 25 million acres in Maine, Minnesota, Montana, Wyoming, Idaho, and Washington as critical habitat for the reclusive feline.

Join me and our hard-working staff in taking a moment to celebrate this major victory for the long-term survival of the Canada lynx.

The lynx has been decimated by a combination of fur trapping and loss of habitat to logging and development. In 2008, the Center for Biological Diversity reined in lynx trapping in Minnesota through successful litigation and today’s victory gives us the tools we need to further protect its habitat. These 25 million acres of critical habitat will provide vital protections, allowing the lynx to recover.

Even as we celebrate the breadth of this victory, we recognize that key areas were left out of the designation, including the southern Rockies of Colorado, where a population of lynx has been established through reintroduction, and the Kettle Range in northern Washington, where scientists have identified essential habitat for the lynx. The Center is considering options for how to obtain protection for these additional areas and will keep you up to date as we move forward.

Again, thank you for supporting our work to protect the Canada lynx — take a moment to share in this victory with us.

HELENA, Mont. — The amount of land designated as critical habitat for the Canada lynx, a cat federally classified as a threatened species, will increase more than 20-fold under a U.S. Fish and Wildlife Service decision announced Tuesday.

The designation will apply to about 39,000 square miles in six states, up from a total of 1,841 square miles in three, the agency said. Lands in Maine, Idaho and Wyoming are being added to the critical-habitat map that was adopted in 2006 and consisted only of some national parklands in Minnesota, Montana and Washington. The amount of land designated in those states will expand.

The habitat reconsideration, influenced by a court ruling, followed allegations that Deputy Assistant Interior Secretary Julie MacDonald interfered with some decisions by the Fish and Wildlife Service. MacDonald resigned in 2007 after the Interior Department’s inspector general concluded she pressured federal scientists to alter findings on certain matters before the agency.

“This (lynx habitat) was one that we decided she may have inappropriately influenced,” Shawn Sartorius, the Fish and Wildlife Service’s lead lynx biologist, said Tuesday from his Helena office.

Sartorius, who said he knows of no terrestrial critical-habitat designation larger than the 39,000-square-mile plan, added that not all the same people were involved in the lynx decisions of 2006 and Tuesday. That two such widely different outcomes were reached may not be attributable entirely to MacDonald’s involvement or lack of it, he said.

Critical habitat identifies places with features essential for conservation of threatened or endangered species. For lynx, it includes forests with features such as woody debris for denning; habitat for the snowshoe hare, on which lynx prey; and extended periods of deep, fluffy snow, through which lynx move with relative ease.

Plum Creek Timber Co., the nation’s largest owner of private land, finds the Fish and Wildlife Service decision disappointing but “will work with the agency as it implements the critical-habitat designation and as it determines how the designation will be applied to private land,” said Kathy Budinick, spokeswoman for the Seattle-based company.

“It’s too early to tell what the implications to our business will be, but we have dealt with Endangered Species Act issues for years and this is one of our areas of expertise,” Budinick said. “So we will deal with related implications for our operations as they arise.”

She added that Plum Creek and others had offered Fish and Wildlife an alternative plan they thought would provide greater benefit for lynx and “more long-term business certainty” for landowners.

“We don’t think that what they think might happen is likely to happen,” he said.

He also noted that management practices of the U.S. Forest Service already take into account the needs of lynx, and the habitat designation is unlikely to impose new requirements on that agency.

The Center for Biological Diversity in Portland, Ore., finds the habitat expansion “a dramatic improvement from the Bush administration to the Obama administration” and is “overall quite pleased,” program director Noah Greenwald said. But it is regrettable that some areas such as the Southern Rockies were not included, Greenwald said.

Sartorius said parts of the Southern Rockies have good lynx habitat, but only in relatively small patches. The area did not qualify as “the best of the best” when the Fish and Wildlife Service evaluated habitat, he said.

Lynx are powder-loving wildcats closely related to bobcats. They once thrived in Colorado’s alpine zones, but were hunted and trapped to near extinction in the late 1800s.

Before state biologists started re-establishing a lynx population with cats transplanted from Canada and Alaska in 1999, the last confirmed lynx sighting in the state was near Vail in the 1970s.

Although the specialized predators had become exceedingly rare, the federal government refused to put the cats on the endangered species list until legal action by conservation groups forced the listing.

Conservation groups petitioned for a listing in 1994. In 1997, a federal judge ruled that the U.S. Fish and Wildlife Service unlawfully had refused to propose listing the lynx under the ESA.

The judge ruled that the federal government “relied on glaringly faulty factual premises, and ignored the views of its own experts” in refusing to consider the lynx for listing.

The agency finally complied, listing lynx as threatened in 2000. The lack of an adequate regulatory mechanism to protect lynx on national-forest land was cited as one of the primary threats. The new rule released this week (11/9/08) is intended to address that question mark.

Conservation groups continue to accuse federal agencies of foot-dragging, for example by its hesitation to declare critical habitat for lynx. It required another lawsuit by conservation groups, and another stern rebuke from a federal judge, before the wildlife service released a critical-habitat proposal. Colorado wasn’t included in the critical-habitat proposal, a decision that could lead to yet another lawsuit.

The agency left Colorado out of the critical-habitat equation based on the claim that the state’s lynx are not crucial to overall survival of the species across its North American range.

Conservation groups say that’s nonsense, and that Colorado of all places, with a population of several hundred transplanted lynx, needs a critical-habitat designation.

The Endangered Species Act obligates the federal government not only to protect listed species, but to actively seek recovery, making sure populations of threatened plants and animals can persist across their historic habitat.

The new Southern Rockies Forest Service rule, in the form of a regional forest plan amendment, and other documents related to lynx conservation are available on the web at: http://www.fs.fed.us/r2/projects/lynx.