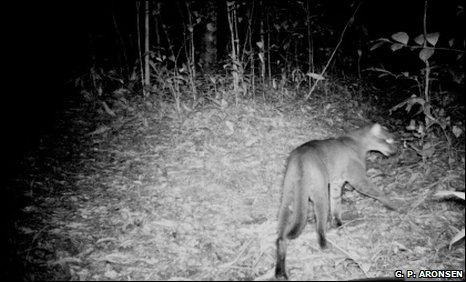 One of the most elusive of all wild cats has been photographed deep in the jungle of Uganda.

Three images of a wild African golden cat were taken by a digital infrared camera trap set up by biologist Dr Gary Aronsen of Yale University in the US.

To his knowledge, just one other image of a wild African golden cat has ever been published.

Although taken in black and white, the new photos reveal this particular golden cat actually has a dark coat.

The cat is so rare few researchers working in African forests have seen it.

There is very little known about this felid, what kind of habitat it prefers etc

Dr Gary Aronsen
A colleague of Dr Aronsen’s has worked for years in Kibale National Park, Uganda where the photos were taken, and has seen the animal only once, while Dr Aronsen knows of only one other published photograph of the cat in the wild, taken in the Democratic Republic of Congo.

“Anecdotal evidence suggests that while many villagers and locals may see the cat crossing roads, or maybe raiding domesticates, there are just not that many researcher sightings. We’re usually looking for other things.” 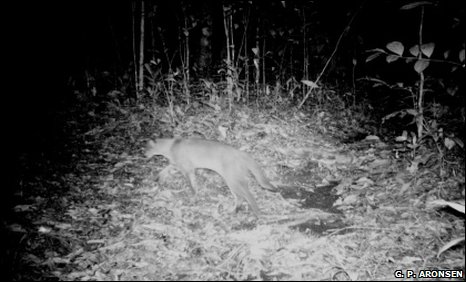 As a result, says Dr Aronsen, there are no direct field studies of the African golden cat (Profelis aurata).

Most studies that have been done are based on scat analyses.

“There is very little known about this felid, what kind of habitat it prefers etc,” he says.

“It is spread across equatorial Africa, but it is cryptic and we presume solitary, making observations few and far between.”

The African golden cat is a medium-sized cat, about 80cm long, that lives within forest across central and west Africa.

Despite its name, its fur colour is variable and it can be either spotted or not.

“The golden cat is melanistic, meaning that its colour varies over its lifetime, and across the continent,” explains Dr Aronsen.

“I was disappointed that the cameras could not give me more data on [the cat’s] colour, but the images suggest it is a ‘dark phase’ cat.”

It is one of two cat species known to live within Kibale National Park, the other being the serval.

Servals are slim, long cats, while the golden cat is muscular and compact. 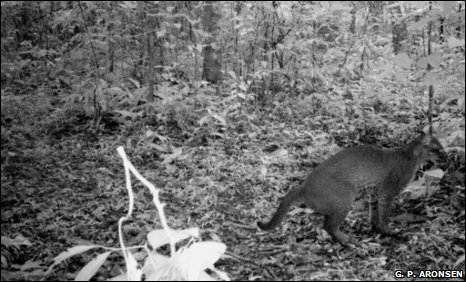 Dr Aronsen originally set up his camera trap to take images of primates living within the park.

“For the most part, the cameras capture amazing images of elephants, monkeys, chimpanzees, duiker and buffalo. The cameras also can record movies, so you can see multiple animals in a group, such as chimpanzees.”

But he was still surprised when it recorded three separate images of a golden cat, which are published in the African Journal of Ecology.

“That meant that the camera was located within the cat’s core area,” he says.

The images were taken in an old-growth forest patch located within a place called Mainaro, which is a patchwork of old-growth, regenerating, and replanted forests, Dr Aronsen explains.

“Given that three images were captured within an old-growth patch, I’d say that the Kibale golden cats may prefer this habitat. But the range of any cat is large, and so they can go anywhere to hunt.”

Aronsen himself saw his first and only wild African golden cat this summer, when one looped along in front of his motorbike as he travelled to conduct field work in a remote area of replanted forest.

Dr. Jim Sanderson is someone who shares our belief that the money should go to the animals and not be wasted on salaries and benefits for those who are doing the fundraising.  If you contact him and say you want 100% of your donation to go to the Golden Cats in the wild, that is exactly what will happen.

Dr. Jim Sanderson has been responsible for igniting a passion in local peoples for the Golden Cats when he took the first photographs ever of them in the wild.  He works with teams of local scientist to camera trap and gather information on these rare wild cats all around the world.  He goes a step further and gets the people in the area to take pride in their natural resources so that they will help to protect these small cats that are on the brink of extinction.

To read more about this conservation effort and see never before seen photos of the Asiatic Golden Cat in the wild go to: http://www.wildnet.org/smallcat.htm

Download this 2008 report documenting 1,158 endangered and threatened exotic cats being illegally, yet openly sold in Myanmar markets.  The Wild Cat Trade in Myanmar

Officials have warned that poaching is still threatening tigers in Vietnam.

Buffy the Tiger Dies at age 22

Buffy the Tiger Dies at age 22