Kabir Bhatia at our partner station WKSU reports that a proposed ban on exotic animals could affect one of the best known high school mascots in the state: Obie, the Massillon tiger cub.

Back in October, the owner of a farm near Zanesville set loose 56 lions, tigers, bears, wolves, and other animals before committing suicide. Most of the animals were killed by the Muskingum County Sheriff’s deputies. A task force has recommended banning the ownership of exotic animals — except for zoos, circuses, and research facilities — as well as the sale of exotic animals at public auction. Two years ago, when former Gov. Ted Strickland  signed a similar executive order, he specifically exempted live school mascots like Obie. (Strickland’s order expired and state legislators never acted.)

But WKSU reports that what troubles some about the tiger cub displayed on the sidelines of Massillon football games is that the district gets a new one each year, often returning the “old” Obie to the same local exotic animal farm that breeds “the Obies:”

But for Karen Minton, the issue is clear. The Ohio director for the Humane Society of the United States says mascots should be banned both for public safety and the welfare of the animals.
“The problem with Obie is the fact that there’s a new Obie every year.  What happens after Obie’s gone and done for the football season and grows up a little bit? Who’s taking care of all the Obies through the years?

You can listen to WKSU’s story while you look at this slideshow of baby tiger cubs or watch Obie Number 39 — the 39th tiger who served as Massillon’s mascot — in post-game action:

From the CDC: "Wildlife, Exotic Pets, and Emerging Zoonoses" 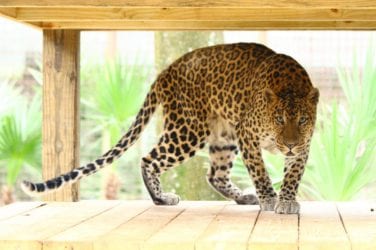 Big Cat Updates Have YOU voted at VoteCats.com and asked a friend to vote, ...

Centre for introduction of tigers in Gujarat; state not ready to trade its ‘pride’

Centre for introduction of tigers in Gujarat; state not ready to trade its ‘pride’ ...