Sculpture of Tatiana the tiger unveiled

(12-25) 18:48 PST SAN FRANCISCO — Tatiana the tiger lives on. In a dirt perch halfway up San Francisco’s Telegraph Hill, a tiled sculpture of the slain feline now sits lazily in the wet dirt and keeps an eye on the tourists on the Embarcadero and boats in the bay.

One year after the Siberian tiger leapt from her enclosure at the San Francisco Zoo into infamy and inglorious death, a local sculptor unveiled his version of the feline Thursday. Built roughly to scale, the sculpture is supposed to look as Tatiana must have appeared in late 2005 when she first came to the zoo at less than 2 years old.

“I wanted to do something to commemorate the life and death of this beautiful creature,” said sculptor Jon Engdahl, 48, who lives in the Sunset District.

Engdahl, a former soldier who is a part-time artist, said he felt an affinity with Tatiana after reading accounts of what happened to her at the San Francisco Zoo last Christmas.

That’s when the 243-pound Tatiana leaped from her grotto at 5 p.m. and attacked 17-year-old Carlos Sousa Jr., and his friends Paul and Kulbir Dhaliwal, who were standing on a 3-foot railing outside the exhibit, according to police reports.

The tiger mauled and killed Sousa, then turned on the Dhaliwal brothers. According to police reports, the tiger was attacking the brothers when San Francisco police officers found her and killed her with their pistols.

Some witness accounts say Sousa was trying to protect his friends when the tiger turned on him. Others said the tiger attacked the three men after having been taunted or teased by them. Sousa’s parents sued the city and zoo Tuesday, saying zoo officials ignored warnings that the walls of the tiger’s enclosure were dangerously low.

Engdahl said he and many others felt bad for the tiger, considered to be a victim by many people.

“This was a labor of love,” he said. “I identified with this beautiful animal. I felt sorry for the sordid and needless way she died.”

Engdahl created a sculpture of the animal reclining, and looking much like a young cat. The sculpture is made of broken tiles and concrete on a wire base. It is reminiscent of the sculpture work of the Spanish artist Antonio Gaudi.

Engdahl placed the sculpture in the dirt near the Greenwich Steps on the east side of Coit Tower. It’s on a piece of earth made flat, and amid the trees and brush of that thick green swath too steep for a roadway. The big cat sits amid some dense foliage and is not easily seen from the adjacent steps nor from the street below.

Engdahl, who held a news conference at the site Thursday, said he sought no permission before placing the piece. He said that would have taken too much time and effort.

“If the city wants me to remove it, I will,” he said. “But I don’t think anyone will care.”

Letter: Tiger should go to sanctuary

THE TRUTH ABOUT TIGERS

http://www.youtube.com/truthabouttigers   A film by Shekar Dattari   “The Truth About Tigers is an ... 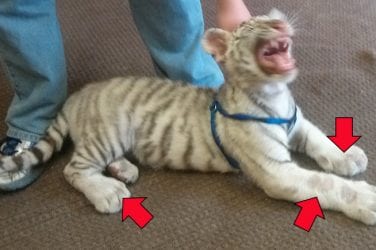