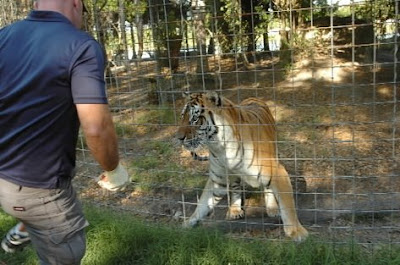 Flavio keeps his eye on a piece of chicken that Scott Lope, operations manager at Big Cat Rescue, was going to give him Monday night. Lope was telling educators about the big cats that the school officials are going to help

TAMPA – Your grocery bill might be $250 a day, too, if you towered over a 6-foot man and had paws the size of dinner plates.

Flavio, a 20-year-old retired circus tiger, showed off his bulk Monday night when he leapt onto his hind legs to snag a quarter of a chicken that Scott Lope held over his head.

Lope, the operations director at Big Cat Rescue, was feeding the lions and tigers in front of a tour group of Hillsborough County educators who hope to raise money for the cats.

About 40 teachers and administrators visited Big Cat Rescue this week to learn about the nonprofit organization’s mission and how donations from local schools could benefit it.

Now, they are taking the message back to their schools and trying to raise $250, which covers the cost of feeding the lions and tigers for a day, from each school this month.

The local chapter of Phi Delta Kappa, a professional educators association, is coordinating the charity drive.

Bonnie Kirstein, a student intervention specialist and one of the fundraiser’s organizers, said many of the children she works with at Davidsen Middle School feel frustrated because they see their parents having a hard time economically. Raising money for Big Cat can show them they can still make a difference, she said.

For Big Cat, which cares for 140 exotic felines that have been abused, abandoned or neglected, the effort exposes more students to its mission. Volunteer Denny Mitchell said he enjoys giving children tours and helping them understand why the cats should be protected.

“I like to bring kids because it’s a great place to start with the message of conservation,” Mitchell said.

Dana Clements, a third-grade teacher at Westchase Elementary, brought two of her students with her to the tour Monday. They had studied lions and tigers in class and attended a field trip to the 45-acre sanctuary in Citrus Park, where they were able to encounter the animals in a way they can’t through books or television.

Instead, her students learn about the dangers of adopting exotic animals at home and disappearing wildlife.

Grayson Leal, 9, said he could see the appeal of smaller cats, such as a bobcat or a lynx, but wouldn’t want one.

“They look really cute, but Big Cat Rescue told us that wasn’t the right thing,” Grayson said. “They get too powerful or are mistreated.”

Cameron Wiebe, 8, said the rescue was a cool place for children to learn about wild cats. He discovered a surprise namesake on his trip, too.

“When I saw one of the lions named Cameron? I thought that was very interesting.”

Students at the schools taking part in the fundraiser will have a chance to do a podcast with Big Cat Rescue and attend a field trip where they can watch the lions and tigers getting fed.

The teacher, principal and area director of the class that raises the most will receive a three-day weekend in a Jaguar and a two-night stay in St. Pete Beach, thanks to corporate sponsors.

Organizers don’t yet know how many schools will take part in the fundraising effort.

Woo Hoo! We Won Thanks to So Many of YOU!

The hunt for Sumatra’s killer tigers

The hunt for Sumatra's killer tigers