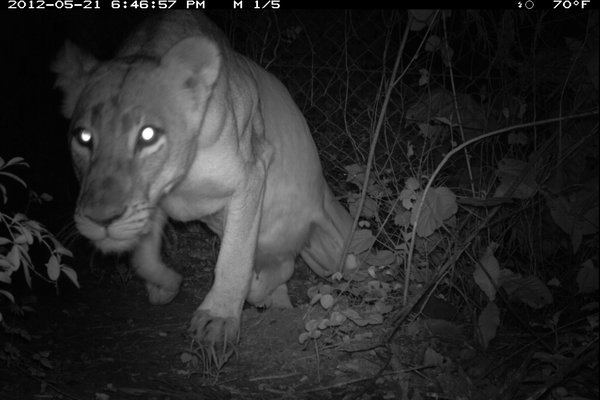 A lioness crawls through a hole in a fence on the author’s property in the suburbs of Nairobi, less than a mile from Nairobi National Park.

NAIROBI, Kenya — The lioness lay sleeping in the bed of a dark green pickup, her eyes covered with a soft blue cloth, as a veterinarian in camouflage stood over her. “Ni kubwa!” he said in Swahili: “She’s big!” 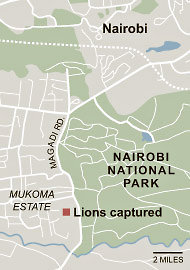 A Kenya Wildlife Service veterinarian captures a lion cub in the suburbs of Nairobi.

She was in fact surprisingly fat, fluffy and young. Surprisingly because she had been living in the suburbs of Nairobi for at least four months, and it was hard to believe she was so fit and healthy.

And hard to believe that she was actually captured. Tranquilizing a wild large carnivore is always stressful, and these were hardly the best circumstances. Cornered by one of my dogs at 6:30 that morning, she was protecting a trio of 2-month-old cubs in thick bushes at the bottom of my property.

It took 12 rangers and 3 vets from the Kenya Wildlife Service — aided by two Land Cruisers, a pickup and a tractor — more than six hours to dart her and capture the cubs by hand. The small, swarming crowd of onlookers, many taking pictures on their phones, did not make things easier.

As difficult and exciting as capturing the lions was, a more imposing question now loomed: What do you do with them?

The vision of lion prides roaming endless African savannas, unaffected by people, is a romanticized image that survives in just a few very large protected areas. Lions play important roles in ecosystems a

Saving Space for Tigers on a Crowding Planet