The Wildlife World Zoo & Aquarium recently welcomed the two newest members of its zoo family – a pair of white Bengal tigers. Born in mid-June, the two female cubs recently moved to their temporary exhibit inside the zoo’s aquarium, where they’ll spend the hot summer months. Though they may look like cuddly house cats, these felines have a lot of growing up to do and raising them is no easy job.

The Wildlife World Zoo’s animal expert, Grey Stafford, says it’s important to carefully raise these endangered tigers, while maintaining a safe distance from these powerful animals. Stafford took a few minutes to tell us just what it takes to bring up a Bengal tiger.

Do you interact a lot with the tigers when they’re young?

We have a hand-raising team here at the zoo that specializes in raising young animals of all kinds. So when the cubs are first born, the team will go into the enclosure with them to change their bedding and bottle-feed them. So early on, the care is total. As the cubs mature over the next couple of months, the trainers pull back from the hands-on care, and by the time the animals are adults, they still get cared for every day, but it’s through protective barriers. This is called “protected contact,” and it’s a great system that we’ve used for many litters of big cats.

What are the difficulties of raising an animal that will eventually get so big?

When they’re cubs, the tigers are really adorable and it’s fun to watch them because they play with each other, but they play much harder than you or I would in a pickup game of tackle football. As they mature they’re going to wrestle and swim and chase each other and do all the things that tigers do, but they’re built for it and we’re not.

They have a really thick coat of hair and that’s one of the reasons we begin to transition away from direct contact with them as they get older. They’re so much stronger than us, that even if they’re just playing, they can really hurt us. We don’t have their speed or strength or even their hair to protect us, so probably by the time they’re about 30 pounds, we are stepping way back in terms of hands-on interaction.

How have visitors reacted to the cubs?

People just flock to these little animals, because big cats just have such a draw for people, especially when they’re still young. It’s great to have the cubs too, because people can watch them grow over the years. It’ll take these cubs about two years to reach their full size, but already they have these massive paws so you can tell that they’re going to get big.

It’s also great for us because it’s a way to get people in the door, because once they’re here we can educate them about the stonefish and the sea horses and all the creatures that are just as important to the survival of our planet, but maybe don’t have the same draw as a baby tiger. And few things do.

Mangalore Feb 13: The leopard which was caught after an eight-hour joint operation by ... 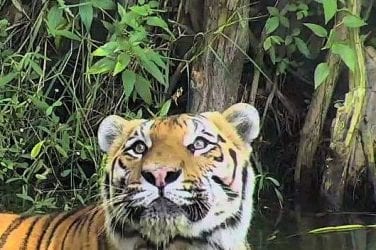 Big Cat Updates Will Bobcat is in the Hospital:  Will is in the West ...

Harrison Ford’s Work to Save The Tiger Part 1:  Smithsonian and International Tiger Coalition ...