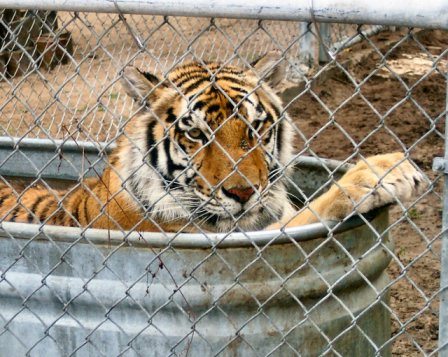 Roaring lions and tigers and their waste runoff from a big-cat sanctuary have created a nuisance that has “destroyed the quiet enjoyment” on nine Roane County residents’ properties, a $10 million lawsuit filed Thursday alleges.

The Roane County Circuit Court complaint is the latest effort in a series of maneuvers by Roane County officials and residents targeting Tiger Haven. The sanctuary sits on nearly 50 acres of rolling hillside east of Kingston. It’s a home for big cats considered abused, abandoned or neglected.

In recent years, efforts to tighten oversight of the sanctuary have been launched, residents have taken their gripes to the media and complaints have been voiced on several occasions to Roane County’s commissioners.

The lawsuit seeks to permanently shut the sanctuary down or at least prevent the operators from acquiring any additional big cats.

The lawsuit those annoyances range from “caterwauling” big cats — their roars heard “for several miles” — to adverse effects on domestic and farm animals, problems sleeping and worries about the big cats escaping.

Another $5 million in compensatory damages is sought for contamination of the plaintiffs’ properties through runoff of “feces, urine, and other contaminates.”

The lawsuit states that defendant Mary Lynn Haven, also known as Mary Lynn Parker, organized and incorporated the nonprofit in 1993 after receiving a state permit to house one pet tiger there two years earlier.

Since then, the big-cat population has grown dramatically, and now there are more than 250 “tigers, lions, cougars, leopards, jaguars, and all large cats and mixed breeds” on site, according to the legal action.

As a result, there has been an “ongoing increase in noise level, odor, waste and water runoff … all of which threaten the life and property of the plaintiffs and the environment as a whole,” it continues.

The lawsuit contends the defendants have utilized the sanctuary property so it has become an “unreasonable use” that has resulted in “a direct, repeated, constant … annoyance.”

Doug Drinnon, an attorney in Dandridge, serves as spokesman for Tiger Haven. Drinnon on Thursday hadn’t seen the lawsuit and declined comment.

James B. “Buddy” Scott, a retired Anderson County Circuit Court judge, filed the complaint on behalf of residents of an area around Harvey and Dogwood Valley roads.