Kalpetta (Ker) (PTI): The tiger population in Wayanad Wildlife Sanctuary is stable while there is a slight increase in the number of elephants, according to the just-concluded annual wildlife assessment.

Based on direct sightings, pugmarks on land and claw marks on trees and dropping, the conclusion was that the tiger population in the area is stable at 10-15, Wildlife Warden Deepak Mishra said.

“As many as five tigers were directly seen by the team, which itself is a positive sign,” Mishra told PTI.

The wildlife census of 2006 had put the number of tigers in the area between 10-15 and the preliminary conclusion of the present assessment was that the population of the endangered animal remain stable, he said.

While the adjoining sanctuaries like Nagarhole and Bandipore in Karnataka have been declared tiger reserves, Wayanad is still awaiting the status.

The 2006 census had found that the Wayanad sanctuary was home to about 500 elephants and the indications of the present study was that there could be an increase in elephant population.

According to Mishra, poaching had been contained totally in the area.

As summer started, 150 km of fireline had been laid in Wayanad to insulate the area from forest fires, Mishra said.

You CAN save the tiger

Tiger Trivia: Did you know?

Meet the Tiger Next Door director on C.A.T. field trip at the 19th annual ...

Please see the article below from China.  It looks like destruction of stockpiles of ... 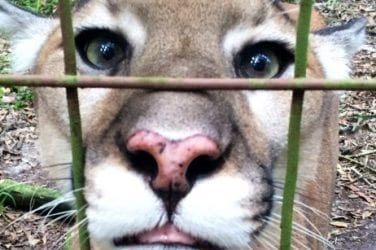 #GoodPetsBadPets   Cougar VS Armadillo   The cougar “cubs”, Ares, Artemis and Orion get ...