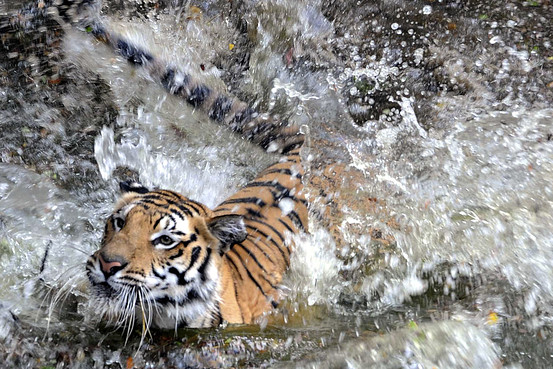 Noah Seelam/Agence France-Presse/Getty Images
A tiger jumped into a pond at a zoological park in Hyderabad, April 23, 2010.

India’s many national parks are home to over half of the world’s tigers.  Still, the number of tigers in India has sadly plummeted from an estimated 100,000 around a century ago to roughly 1,700 today.

As a result, “kuch nahi” (there is nothing) is likely to become a familiar refrain if you go on a tiger safari. Let’s face it: tigers are extremely elusive, so if your only aim is to see tigers, you’re better off at the zoo.

But there is something magical about seeing one of the world’s rarest animals in its natural habit. Besides, India’s parks have more to offer than rare tiger sightings.

The best time to visit national parks to see tigers is between March and May. Parks generally close in July or earlier, and open again by mid-October. The jungle is more lush after the monsoon, but tall grass will make it harder to spot the big cat.

Here are a few tips on popular tiger safari destinations recently visited by reporters from The Wall Street Journal. 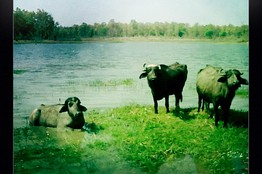 Why: If you want to see a tiger in the wild, Bandhavgarh is probably your best bet. With 50 or so tigers and a core area of 105 square kilometers, Bandhavgarh boasts the highest density of tigers in the world. At this time of the year, it’s relatively easy to see female tigers with their cubs.

Highlight of our trip: Seeing a tiger resting peacefully next to a stream in a lush area of Zone 3, our favorite, mainly because there were fewer jeeps.

Beyond tigers: Tigers are what you really come here for. Animals you are bound to see include the spotted deer, sambar deer, lemur monkeys, peacocks and the Indian roller, a bird with dazzling blue plumage. You can also check out the hilltop Bandhavgarh Fort.

Travel tips: Book everything in advance, either through your hotel or a travel agent. If you don’t, you may not be allowed in the park at all. A limited number of jeeps per day are allowed in the park, which is divided into four zones. Make sure to book at least one trip in Zone 1, Tala, which has the highest number of tigers. 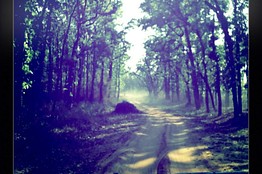 While park authorities will supply you with a guide, they are allocated randomly, meaning that, on busy days, there is a chance you may get stuck with a teenager who has very little interest in nature. Ask your hotel or travel agent if they have nature experts on hand to join you. You can fit two jeep safaris a day: typically one at the break of dawn – get ready for a 5 a.m. wake up call – and one in the afternoon. Safaris cost around 4,600 rupees ($90) per jeep.

There is the option of going on an elephant safari, but we were told this was in the tens of thousands of rupees so we skipped. Shorter so-called “joy rides” on elephants are also possible, and they cost about 1,500 rupees. A good alternative to Bandhavgarh is the nearby Kanha National Park. While you are less likely to see tigers there, the landscape and wildlife are meant to be more interesting overall.

Where to stay: There are plenty of safari lodges in and around the park. We stayed at the Bandhavgarh Jungle Lodge, which we loved – bungalows set in a pleasant garden, great food and friendly, helpful staff (rates vary so it’s worth haggling. Another excellent option is the idyllic Tree House Hideaway, perfect for a romantic getaway.

How to get there: The closest airport is in Jabalpur, which is roughly a three-and-a-half hour drive to Bandhavgarh. Otherwise you can get a train to Umaria, a short drive away.

Why: India’s first national park, which opened in the 1930s, changed its name in 1957 in honor of the conservationist Jim Corbett, who grew up in the area and was famous for tracking down and killing man-eating tigers and leopards. Corbett’s winter home in Kaladhungi, roughly half-an-hour’s drive from the park, has been converted into a museum. The park was among the first to be embraced by the Project Tiger scheme, which was launched in 1973 with the aim of protecting tigers. But tiger sightings are rare as the park is so large, covering more than 1,000 square kilometers.

Highlight or our trip: Driving among a herd of wild elephants eating in the trees and bushes next to one of the many dirt tracks used by safari jeeps to traverse the park. A female elephant and her baby crossed in front of our jeep, pausing to size us up before moving on to the other side of the track.

Beyond tigers: Jim Corbett has a wide range of wildlife, so even if you don’t see a tiger, there are plenty of other animals to enjoy. The park boasts wild elephants, sloth and Himalayan bears, deer – sambar, spotted, barking and hog –, macaque and langur monkeys, mongoose, to name a few, as well as a stunning array of birdlife. 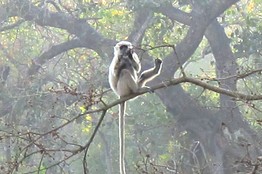 Travel tips: As with other parks, it’s best to book your safari well in advance as there are limits on numbers allowed in the park at any given time. Jeep safaris go in the morning and evening. Jim Corbett has three main zones. If you have to make a choice, it’s probably best to avoid Bijrani as this is the zone most crowded with jeeps. You can book a vehicle – sturdy, open-top Maruti Gypsy jeeps — through your hotel for about 5,000 rupees per safari. A guide will join you when you reach the park gate. Other options include taking a canter safari, which is a bigger, open-top vehicle, and an elephant safari, which cover less ground but can potentially get you up close to tigers.

Where to stay: There are scores of hotels and guesthouses around the eastern edges of Jim Corbett, from the main town of Ramnagar northwards beyond Amdanda Gate, the entry point to the park’s Bijrani Zone. Camp Forktail Creek on the northeast rim of the park in Bhakrakot village is highly recommended, as is Jim’s Jungle Retreat to south of the park. We stayed at Corbett Leela Vilas, about 15 minutes drive north of Ramnagar, which has a dozen or so clean and well-appointed cottages. The well-run resort has a beautiful swimming pool and packages include breakfast, lunch and dinner. These three resorts are at the higher-end, but there are plenty of other options around Jim Corbett to suit smaller budgets.

How to get there: The park is a six to seven hour drive north from Delhi. Alternatively, you can take a train to Ramnagar. 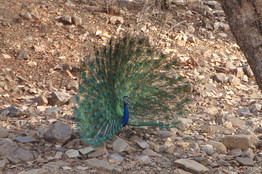 Why: Ranthambhore’s thin forest cover and open grassy meadow make it a relatively good area to see tigers, as they have few places to hide. One of the reasons Ranthambhore is so popular is that it’s very close to Jaipur, which is firmly on the tourist map.

The tiger reserve’s 275 square kilometer area has an estimated 31 tigers.

Number of tigers spotted: Zero. However, we saw one tiger when we visited Ranthambhore this time last year.

Highlight of our trip: Although we didn’t see a tiger, we were very lucky to spot a rare leopard. It was lying on a small hill ahead of us and was initially hidden by the trees. We were able to see it properly once it started walking.

Beyond tigers: There is no guarantee whatsoever that you will see a tiger or a leopard. Expect to see a lot of deer, including the sambar deer, a favorite of the tiger. We also saw a blue-hued antelope called nilgai. We were lucky to see two peacocks dancing with their feathers in full display. The park’s other wildlife includes monkeys, sloth bears, wild boar, king vulture and owls.

We recommend visiting the Dasktar crafts center, which is close to the tiger reserve’s main gate. There you will find village women working on products ranging from scarves to bed sheets to kurtas, for sale at reasonable prices.

You can also visit the Ranthambhore Fort, believed to be one of India’s oldest.

Travel tips: Only park-approved vehicles are allowed inside the reserve. Your options are an uncovered gypsy, which seats six people, or larger vehicles that seat up to 20. You can book per seat.

The gypsy (530 rupees each for Indians, around 930 rupees for foreigners) is ideal because it allows you more freedom to go explore the park’s many nooks and corners. Gypsies are in high demand, so book early. You can reserve one through the park’s official website. You can also book through a travel agent or your hotel, though they’ll add a service charge for this.

Rathambhore park is divided into eight zones. But, unlike in Badhavgarh, visitors are assigned their zone by lottery. There are two safaris a day – one starts at 6.30 a.m. and the other at 3 p.m. Your hotel or travel agent can help you arrange a guide or nature expert to come along.

Where to stay: While there are plenty of budget options in Ranthambhore, consider staying at a nice hotel because you’ll be spending a lot of time there. We stayed at theNahargargh Fort, which has spacious rooms and courtyards, and is built like a palace. Ask for a discount when booking.

High-end options in the park include luxury properties run by the Taj Group, the Oberoi Group, and Sujan Luxury Hotels.

How to get there: The closest airport is in Jaipur, which is roughly a three-hour drive away. The closest train station is Sawai Madhopur, which is around 14 kilometers from the park. There are direct trains from Delhi and Mumbai, but make sure to book way in advance.

Vacation Rotation Enclosure Grand Opening   We are so pleased to announce that the ...

BCR April 15, 2009
0 comments 0 Shares
Big Cat Rescue is a 501(c)(3) nonprofit organization, FEID 59-3330495. Florida law requires that all charities soliciting donations disclose their registration number and the percentage of your donation that goes to the cause and the amount that goes to the solicitor. We do not utilize professional solicitors, so 0% of your donation goes to a professional solicitor, 100% goes to Big Cat Rescue. Non-program expenses are funded from tour income, so 100% of your donations go to supporting the cats and stopping the abuse.