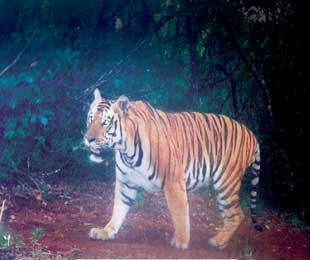 The tiger in Sahyadri sanctuary, captured by the forest dept’s trap camera, recently.

For decades, the presence of tigers in the Sahyadri wildlife sanctuary had remained, at best, only speculation. No more, though. A report from the Centre for Cellular and Molecular Biology (CCMB) in Hyderabad has confirmed the presence of a tiger, proof finally that tigers exist in Sahyadri sanctuary.

What was merely a belief so far has finally been confirmed. The Centre for Cellular and Molecular Biology (CCMB) in Hyderabad has verified the presence of a tiger in the Sahyadri Tiger Reserve, located in the Chandoli-Koyna forests, spread across Satara and Kolhapur districts in western Maharashtra.

Speaking to Pune Mirror on Thursday, M K Rao, conservator of forests (Kolhapur Range), said, “We had sent seven samples of wild animal faeces to the CCMB for analysis. While six samples were found to be of leopards, one was confirmed to be that of a tiger.”

Pune Mirror is in possession of a rare, hitherto unpublished photo of a tiger captured through a “pilot” camera installed by the forest department inside the 741 sq km reserve, three months ago. This was confirmed by the forest authorities, though they refused to disclose the exact location where it was captured in the interest of tiger preservation.

“The picture is from the reserve landscape, but I cannot confirm the location,” Rao told Mirror.Rao said that the forest department is now preparing to conduct a census using infrared cameras to ascertain the exact number of tigers in the Sahyadri Tiger Reserve-the first tiger reserve in Western Maharashtra, created in January 2010.

The State Wildlife Department, along with National Wildlife Research Institute (NWRI) Dehradun is chalking out a plan to install 20 cameras at various locations in the reserve area that will serve as trapping cameras.

“A waterhole census was held last year, but it is not foolproof, hence the trapping method with infrared cameras will be implemented now. We have even finalized the 20 locations for the purpose,” Rao added.

The cameras are expected to help the authorities take a headcount of tigers and their prey, besides record details of their movements. Though it was believed that the region had a tiger presence, there has been no official information on the exact number of tigers in the Chandoli and Koyna region till date. The belief was based entirely on the rare sighting of a tiger by locals in the past few years.

Rao said there was a need for following a foolproof method before confirming a tiger presence and their exact numbers. “After the waterhole census last year, we collected the faeces samples using the Line Transect Method for ecological sampling as it is more accurate. The samples sent to Hyderabad were collected through this method,” he said.

Koyna Wildlife Sanctuary and neighbouring Chandoli National Park, together form the Sahyadri Tiger Project. According to data collected from the latest census conducted in 2006, the reserve is home to eight tigers and
66 leopards.

Rohan Bhate, an environmental activist and wild life photographer from Karad, said he was sure there were more tigers in the region than the forest authorities would like to confirm. “There have been pug marks, faeces, and nail marks on trees, which confirm there are tigers out there.”

The area covered by the tiger project includes 423 sq km in Koyna, which was declared a sanctuary in 1985, and 317 sq km in Chandoli, a national park. Besides the tiger and leopards, other birds and wild animals, and even a unique species of Koyna Toad (Toad-Bufo Koyanansis) lives in the biodiversity-rich forest of Koyna.

Tigers have rarely been spotted in these two wildlife sanctuaries in recent decades. In fact, when the area was declared a tiger reserve, its opponents ridiculed it saying there were no tigers there. 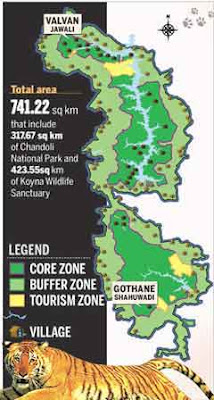 • First reserve in western Maharashtra and fourth in the state after Melghat, Tadoba-Andhari and Pench

• According to the 2007 census, the Sahyadri Tiger Reserve is estimated to have eight tigers and 66 leopards

For the first time in decades, a full-grown tiger in all its feral splendour was sighted in Sahyadri sanctuary. Pune Mirror brings you an exclusive report on the sighting by forest officials