Tiger’s plight moves Hollie Smith
Saturday, 12 January 2008200801120500
When Hollie Smith was growing up she loved visiting polar bears, seals and hippos at the zoo.
But these days it is the sumatran tiger that catches the singer’s attention.
Hollie, 24, will be performing in support of the endangered animal during the zoo music series next month.
She was introduced to Auckland Zoo’s resident sumatran tiger Oz at feeding time on Wednesday and is looking forward to doing her bit to help.
“It’s been really cool learning more about the tigers and getting a better understanding,” she says. “It’s good for people to be reminded about issues going on outside everyday existence.”
Throughout the zoo music series, Hollie and artists Evermore, Liam Finn, the Phoenix Foundation, Katchafire and the New Zealand Symphony Orchestra will perform in concerts from January 20 to February 29.
They will be helping to raise money for the Waitakere Ranges Ark in the Park project, a wildlife protection unit in Sumatra, maui’s dolphins, native frog recovery, asian rhino, and the tigers.
There are fewer than 400 sumatran tigers left in the wild.
Hollie says the concert will be a great way to raise awareness about the critically endangered animal.
“The concert is a good way for kids especially to look at it with a bit more understanding,” she says.
“It’s important to cross that bridge and see what is going on in the world.”
Hollie says she enjoyed meeting Oz.
“He’s a pretty cool animal. And watching him just munch through meat and bones is amazing.”
Ark in the Park project manager Sandra Jack says the concert is a great way for people to help out.
“Zoo music is a great opportunity to let Aucklanders know what fantastic work is being done by fellow Aucklanders in our own backyard,” she says.
The Wild Bean Cafe zoo music series begins on Sunday, January 20, with Evermore.
For more information, visit the website: www.aucklandzoo.co.nz.
http://www.stuff.co.nz/4352181a1860.html
https://bigcatrescue.org 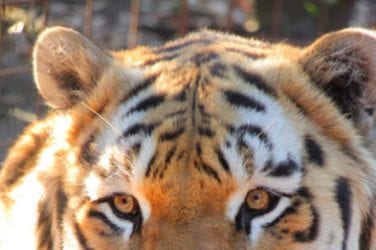 Big Cat Health Report Priya Tigress is oozing from her stitches because she won’t ...

A recent rise in mountain lion sightings is a reminder that the north state ...