0
SHARES
114
VIEWS
Share on FacebookShare on TwitterShare via Email

I was about nine years old and was perched in the highest branches of the pine tree next to our home on Knollwood Dr., in Charleston, WV, looking out toward the airport where my father was the private pilot for Gov. Arch Moore.  It was my favorite spot.  I could see for miles across the hills and valleys.  I was watching planes take off and land at long intervals.  I was bored out of my mind.

“God,” I implored, “never let me be this bored again.”

Well you have to be careful what you ask for because I don’t think there has been a boring moment since.

Today was one of the weirder days.

At 1:24 am the Hillsborough County Sheriff’s office called me (apparently) but my ringer was off, so they called our Operations Manager, Gale, and said that a caller had reported a white tiger loose on Van Dyke Road and they wanted her to see if our tigers were all here.  Gale did the rounds, even though we only have one white tiger, just to be sure that all of the cats were accounted for.  Thankfully, she didn’t bother me with it and let me sleep.

At 8:52, 8:56 and 9:00 am I get (and miss) three calls back to back from Tallahassee, but I am out cleaning litter boxes and the caller didn’t leave a message, so I am unaware, until just now, that these calls were in my “Recent Calls” list.  Probably the Florida Wildlife Commission.  850 717-14XX

At 9:06 am I get a call (also missed) from the Homestead area 305 247-8000 and they didn’t leave a message this time, but I see that the same number did leave a message at 1:25 am, saying that they were a Deputy with the Hillsborough County Sheriff’s office reporting a white tiger sighting on Van Dyke Road in NW Tampa.  I find it odd that a sheriff’s deputy in Tampa would have a Homestead area code, so I call the real Hillsborough County Sheriff.

I tell them who I am and about the call and the Captain said they did get such a call last night, but that he has no idea who called me or why they would have a Homestead area code on their phone. No one else has reported the white tiger and we all just figure it was a drunk or a prank caller. Our enemies, the people who abuse big cats for a living, think it is fun to annoy us and the local police with their stupidity on a regular basis.  I told him that we have a new, high power dart rifle if they do see a cat and that we would be happy to help them capture the cat alive.

I texted Gale after the call and that’s when she told me that she had been called in the middle of the night and had done her head count.

At 11:11 am I get a call from 813 735-93XX and it is a young man who is telling me that he was the caller to the Sheriff last night and that he had been to Big Cat Rescue with his girlfriend and hoped that he had not gotten us in trouble.  I told him that all of our cats were in their cages, so there was no trouble to be in.  He then told me that he loved Big Cat Rescue and that he was sober when he saw the white tiger running along side Van Dyke Road at Lakeshore.  He said that he often sees white tailed deer along this stretch of road and that he was no big cat expert, but that it was definitely a cat, with a body about five feet long, and it was white.

He said that after visiting Big Cat Rescue, he knows that people often have such pets and he felt like it was important to let someone know it was running loose.  He said he was really embarrassed to make the report because he could barely get up the nerve to even tell his girlfriend what he had seen.  I told him he did the right thing.

He said he had checked the news this morning, fully expecting a huge media blitz over the discovery of a white tiger, but was surprised that no one else seems to have seen the cat.  I told him that it’s pretty hard for a white tiger to hide, but if the owner knew the cat was out, maybe they had managed to round it back up.  Unfortunately there are thousands of big cats in private hands and very little government oversight.

Curiosity got the better of me, so I called the Homestead number and the person who answered was not a Hillsborough County Sheriff, but rather runs a seedy little roadside zoo called the Everglades Outpost where they have been known for their cub petting display.  I know the name because I have a photo of someone petting a full grown white tiger at the Outpost. 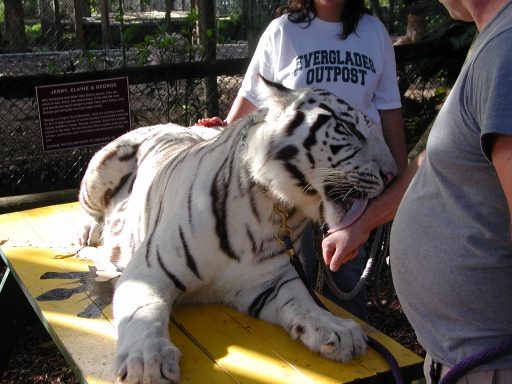 So, now I am wondering, why the Everglades Outpost would call me, pretending to be a Hillsborough County Sheriff’s Deputy reporting a loose white tiger in Tampa when they operate a zoo 200 miles away?

2:30 pm  A few hours after reporting this to USDA and the FWC my Inspector says that the Sheriff’s office often will mask the area code of their cell phones, and it is likely just a coincidence that the number on my phone matches the Everglades Outpost.  Apparently there were 9 HCSO deputies, 1 Helicopter w/ 2 occupants, and 3 FWC personnel involved because of this crazy call.  A huge waste of taxpayer dollars and yet another reason why the U.S. needs to ban the private possession of big cats.  Not that there was a privately owned cat involved, but if it were not such a likely scenario, there would not have been such a huge number of people and resources called to action.

This was my response:
Dear XXXX,

When I made these screenshots, I see what you mean.  The Sheriff’s office main number is 813 247-8000 so perhaps it is just a coincidence that the fake area code 305, attached to that number would just happen to be a place (Everglades Outpost) 200 miles away with a white tiger petting scheme.

What are the odds of that?

OK, so it sounds like this was all just because of some local report.  That is a lot less suspicious to me, then.

Here are the screenshots of the calls.  I can’t figure out how to save the voicemail to send to you, but if that really was a H.C. Sheriff’s Deputy, then you probably don’t need it.

5:18 pm a frantic woman calls and asks if I can tell her the name of their local, big cat rescue, because “there are two black saber panthers under a bridge in Burbank, California.”

Is there a full moon?

In this episode we investigate the so-called “green con”, where volunteers are paying exorbitant amounts to come to South Africa to hand raise lion cubs under the impression that they are doing it for conservation. Activists allege that most of these cubs end up in a “canned” hunt or as breeding robots for farms.

We also focus on the alleged abuse of the permit system for the breeding and hunting of lion and ask whether the country needs to have standardised regulations across all provinces.

Part 2 looks at the lion bone trade which has grown hugely over the past few years. Many people know about how the rhino is being poached for its horn, which is used in traditional medicines in Asia, but few know that lion bones are also being used as a replacement for tiger bones in tiger bone wine in Asia, since the tiger numbers have plummeted so drastically. There are concerns that the trade, which is now just a by-product of the hunt, will eventually spill over into wild lion populations.