In an effort to be more well rounded in our animal and sanctuary related educational experiences, we are starting a quarterly lecture series. We will be conducting this lecture series approximately every 12 weeks and they will be listed on the Volunteer On-site/Off-site Events Calendar. All are welcome to join!

After you watch this video and read this story, will you please help?

Here are the email addresses for the Clark County Commissioners, as well as the Nevada Dept. of Wildlife. Please email them asking for the immediate removal of Tracy Truman as well as regulations in place that will prevent this type of torture – especially by a wildlife officer charged with “protecting” wildlife.

A YouTube video is once again the subject of controversy. This time animal activists are accusing a local wildlife board member of cruelty.

The one-minute video shows a bobcat stuck in a trap. A handler orders his dog to attack the bobcat.

Greisen wants a full investigation into the video, which was originally posted on an Internet forum by Tracy Truman. Truman is the vice chair of the Clark County Advisory Board to Manage Wildlife.

FOX5‘s attempts to contact Truman were unsuccessful. However, the Nevada Department of Wildlife is already looking into the issue.

“The bottom line is the thing that has people concerned about this video is you have a bobcat and a dog that are interacting in a manner that is not pleasing to the eye,” said Doug Nielsen with the Nevada Department of Wildlife.

Trapping is legal if one is in possession of a license.

Greisen says it goes beyond that.

“It’s shocking that an appointed member of the Clark County Board would not only do this but shoot a video and post it online and call it a training video,” she said.

The video has been circulating around YouTube, garnering a lot of comments. Nielsen, a conservation educator, says more information is needed before jumping to conclusions.

“Most of our trappers are good, solid folks that do what they’re supposed to do,” Nielsen said.

Greisen said the video speaks for itself.

“If there’s not a law against what he did, then there should be,” she said.

Clark County commissioners are looking into the matter and have urged Truman to explain himself.

The number one documented cause of death for cats in America is being killed in an animal shelter. Here is your chance to do something about it in Florida, by supporting important legislation that would save cats’ lives.

The Animal Rescue Act would fundamentally shift the way animals in Florida’s animal sheltering system are treated. The bill’s core provision would prohibit any pound or shelter from killing an animal if a rescue group is willing to take the animal. The goal is to refocus shelter operations away from killing animals and towards saving lives.

The Florida Senate Community Affairs Committee will hold a hearing on this bill this coming Monday, January 23. Contact your Senators today to let them know that you support SB 818.Then, contact your state representatives and ask them to support HB 597, the same legislation introduced in the State House of Representatives.

In addition, the Animal Rescue Act would require pounds and shelters to document what happens to animals when they are accepted at a shelter: are they killed? Adopted? Returned to their owner? This information would be available as a public record, so that for the first time, you and your community will be truly aware of what happens to the animals accepted at shelters.

Help match citizens’ of Florida compassion for animals with laws that promote lifesaving solutions in your pounds and shelters. Take action today to support this groundbreaking bill.

P.S. We need all of Florida’s concerned citizens to speak up for change! Forward this message to your friends and neighbors. 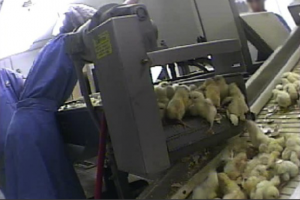 Earlier this year, four states were considering “ag gag” bills to criminalize photography, or video or audio recording, of what goes on at factory farms, animal experimentation labs, and other facilities. They all failed, but as I have been saying for months, it will only be a matter of time before these bills are modified and reintroduced.

In Florida, the first has just resurfaced. Senator Jim Norman, who said undercover investigations are “almost like terrorism,” has a new bill. SB 1184 revises a few agriculture statutes that deal with stormwater management, feedstuffs, and citrus harvesting equipment. Then it ends with a transparent attack on the First Amendment.

A person may not knowingly enter upon any nonpublic area of a farm and, without the prior written consent of the farm’s owner or the owner’s authorized representative, operate the audio or video recording function of any device with the intent of recording sound or images of the farm or farm operation.

It makes exemptions for law enforcement and government employees but, of course, there are no exemptions for journalists or activists. That’s the point. Norman filed his original bill at the urging of an egg farmer, Wilton Simpson, who wanted to stop activists from gathering video footage to use in a state ballot initiative against factory farm cruelty (similar to the successful California initiative).

These ag gag bills created quite an uproar when they were introduced. Most people are unaware, though, that dozens of states already have designer laws protecting factory farms from activists.

Florida “Eco-Terrorism” Law Put to Use

Florida already has a law called the Animal Enterprise Protection Act (FL ST § 828.40 – 43). It passed in 1993 at the request of industry, ostensibly to target groups like the Animal Liberation Front who cause “physical disruption” or the loss of property. It has sat on the shelf for years. That is until this month, when an animal rights activist was charged with a felony in what seems to be the very first use of the law.

Chris Lagergren was arrested at gunpoint by an off-duty Miami cop outside of the Marine Mammal Conservancy in Key Largo.

So what was he allegedly doing that prompted an armed cop, 100 miles outside of his jurisdiction, to arrest him at gunpoint? And what was so dangerous that Lagergren’s bond was set at $30,000?

According to the police report, he had been taking photographs and was tampering with a fence:

R. Lingenfelser [the president of the facility] stated he has seen Chris for the past two weeks standing on the Hampton Inn property, video taping the Marine Mammal property and its staff.

Lingenfelser says he saw Lagergren and another individual attempting to dismantle a fence, and called the police. He said the FBI had warned him that Lagergren, a well-known activist in the area, ”is going to attempt to release any caged animals [or] mammals into their natural habitat” as part of the Animal Liberation Front, a “domestic terrorist organization.”

This isn’t the first time Lingenfelser has had run-ins with photographers. He previouslythreatened a photographer with a felony for taking photos of whales.

Lingenfelser may not be a credible source, but as Carlos Miller wrote on the photography site Pixiq: “That’s not to say Lagergren wasn’t trying to free the whales that day… But until they catch him doing something more than just taking photos or trespassing, they should treat him like any other suspect arrested on misdemeanor charges.”

Lagergren is facing up to five years in prison.

Many of these original state laws were passed under the auspices on targeting the “radicals,” underground groups like the Animal Liberation Front. It is quite clear, though, that existing laws have already gone too far, and are disproportionately targeting non-violent activists. And while all this is occurring, industry groups are relentlessly pushing to go even further, and transparently target First Amendment activity.

This is the model. This is how corporations and the politicians who represent them are chipping away at constitutional rights. It begins with laws targeting the “terrorists” (who, at the very worst, have damaged property) and then, bit by bit, year by year, the net widens as it wraps up an ever-growing group of people, such as those who photograph facilities that have sent whales to Sea World, and those who expose animal cruelty on factory farms.

Moving forward, people like Senator Norman, the FBI, and industry groups will do everything they can to keep your focus on activists like Mercy for Animals, the Humane Society, and Chris Lagergren. Instead, we need to keep our focus on them, and ask ourselves:

What are they trying to hide?

Want to take action? Sign the petition for Chris Lagergren. And contact Florida senatorsand urge them to oppose SB 1184.