0
SHARES
30
VIEWS
Share on FacebookShare on TwitterShare via Email

…not at Big Cat Rescue 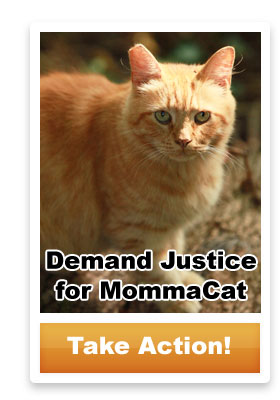 On Aug. 25, a Walton County, Fla., resident fatally shot MommaCat, one of the beloved feral cats a Freeport couple cares for. Despite repeated requests from Alley Cat Allies, the Walton County Sheriff’s Department has not confirmed whether they have informed the man who brutally shot MommaCat that shooting cats is against the law. The Florida State Anti-Cruelty Law makes it clear that shooting a cat is illegal.

This is where you come in. We need as many Floridians as possible to demand that Walton County tell the man who killed MommaCat that shooting cats is illegal and charge him with animal cruelty. Please take action now.

The neighbor shot MommaCat twice as one of the caregivers ran toward him begging him to stop. According to police reports, the responding officer asked the shooter “to give the [caregivers] some time to catch the cats before shooting others” and explained to the complainants that “no criminal act was noted.” This response is unacceptable—shooting cats is clearly illegal under Florida’s Anti-Cruelty Law.

Demand justice for MommaCat today—and help ensure that this never happens to another cat in Walton County.

Led by Dr. Li Juan of Peking University, the Panthera-supported study confirms that over 300 monasteries inhabit the same sky-high region as the snow leopards of the Tibetan Plateau, and protect more snow leopard habitat than local nature reserves. The study, Role of Tibetan Buddhist Monasteries in Snow Leopard Conservation, was co-authored by Panthera’s Dr. George Schaller and Dr. Tom McCarthy, the leading Chinese conservation NGO Shan Shui and the Snow Leopard Trust. It showed that nearly half of the monasteries are found in snow leopard habitat, while 90% exist within 5 km of snow leopard range in the Plateau’s Sanjiangyuan region.

Monks on the Tibetan Plateau serve as de facto wildlife guardians. Tibetan Buddhism considers the snow leopard and its habitats strictly sacred, and the monks patrol wild landscapes surrounding monasteries to enforce strict edicts against killing wildlife. Senior monks, including the Rinpoche and Khenpos, are important influencers in their communities, positively impacting followers’ attitudes and behavior towards wildlife.The study shows that Tibetan Buddhism is practiced across an extraordinary 80% of snow leopard range, and so monastery-based snow leopard conservation could apply over a much broader area than the Tibetan Plateau.

Panthera’s Vice President, Dr. George Schaller, explained, “Buddhism has as a basic tenet the love, respect, and compassion for all living beings. This report illuminates how science and the spiritual values of Tibetan Buddhism can combine their visions and wisdom to help protect China’s natural heritage. Such an approach to environmental conservation needs to be emulated by all the world’s faiths.”

Co-author and Director of Shan Shui, Dr. Lu Zhi, shared, “With Buddhist education, Tibetan people have lived in harmony with nature for thousands of years. Now like everywhere else, the traditional culture on the Plateau is facing the challenge of modernization. Conservationists should work closer with social institutions, integrating scientific methodologies with cultural approaches for better solutions.”

Between 3,500-7,000 snow leopards currently remain in 12 Asian countries, with an estimated 60% of their population and habitat occurring in China. Panthera, Shan Shui and the Snow Leopard Trust have been partnering with four Tibetan-Buddhist monasteries in the Yushu Prefecture of Qinghai Province since 2009. The program focuses on mitigating human-snow leopard conflict and training monks to monitor and protect wildlife. It also supports monasteries in teaching tens of thousands of people about the conservation value of snow leopards through festivals and educational programs. In three years there have been no reports of snow leopards being killed in the study area.

Panthera’s Snow Leopard Program Executive Director, Dr. Tom McCarthy, explained, “Snow leopards share their mountain habitat with poor herding families whose lives are dependent on livestock. When a snow leopard kills a sheep, goat, yak or even a young camel, it is a huge economic loss to the herder. Thanks to this unique program, we now have highly-respected community leaders mitigating conflict and acting as spokespeople for snow leopards by weaving the message of conservation with their religious convictions, and paving the road for the snow leopard’s future on the Tibetan Plateau and beyond.”

This study was published in Conservation Biology via Wiley Online Library. Earlier this week, the report was featured in Wiley’s bi-weekly News Round-Up, composed of the most newsworthy research reports published across the Library’s 1,500 peer-reviewed journals.