Toilet Paper Linked to Rain Forests Being Flushed Down the Toilet 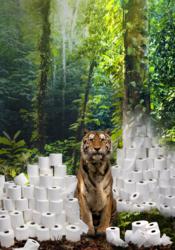 American companies and consumers are inadvertently contributing to Indonesian rain forest and tiger habitat destruction by buying toilet paper and other tissue products made with fiber from Asia Pulp & Paper (APP), according to a World Wildlife Fund report released today.

Don’t Flush Tiger Forests: Toilet Paper, U.S. Supermarkets, and the Destruction of Indonesia’s Last Tiger Habitats finds that APP, the fifth-largest tissue producer in the world, is rapidly expanding into the U.S. market with paper linked to rain forest destruction, originating from areas that are the last home for critically endangered species such as Sumatran tigers, elephants, and orangutans.

Products made with APP fiber, such as toilet paper, paper towels and tissue, are increasingly landing in grocery stores, restaurants, schools and hotels across the country under the Paseo and Livi brand names.

“We applaud the decision by these companies to remove these products from their stores,” said Jan Vertefeuille, head of WWF’s Tiger Campaign.

Since it began operating in Indonesia in 1984, WWF estimates that APP and its affiliates have pulped nearly 5 million acres of tropical forest on the island of Sumatra, which equals an area roughly the size of 4 million football fields or larger than the state of Massachusetts.

In recent years, APP has greatly expanded into the U.S. tissue market, including through Paseo and Livi tissue products. Oasis Brands, which markets Paseo, announced in 2011 that Paseo had become the fastest-growing brand of toilet paper in the U.S. Paseo and Livi are also marketed as “away-from-home” products used in public restrooms in restaurants, office buildings, schools and hotels.

“More than 50 percent of shoppers say they consider sustainability when they shop, but Americans may not be aware that products used every day, like paper and tissue, can be linked to devastating impacts on forests in faraway places,” the report states.

To produce the report, WWF researched Paseo sales to U.S. grocery chains and found Paseo products being carried in grocery chains across the country in 2011. WWF contacted 20 grocers sourcing the largest amounts of Paseo to make them aware of Paseo’s link to rain forest destruction.

The 12 companies identified and contacted, but that did not respond or commit to stopping Paseo sales, are:

“We urge companies to be responsible stewards of the planet and stop carrying Paseo products until APP stops clearing rain forest,” Kramme said.

Trying to improve the pulp and paper sector

Paseo is produced with pulp from APP, a subsidiary of China-based Sinar Mas Group and one of the world’s largest pulp and paper companies. APP owns two pulp mills on the Indonesian island of Sumatra – one of them among the world’s largest – and is responsible for more deforestation in Sumatra than any other company, according to field investigations, government data and satellite imagery.

The research into APP and its Paseo and Livi tissue paper brands is part of efforts by WWF to encourage a more responsible pulp and paper sector, specifically by addressing the increase in the United States of pulp and paper products produced with rain forest fiber or from plantation fiber from converted rain forest.

WWF is working to ensure that North American paper sourcing no longer negatively impacts Indonesian natural forests and instead drives demand for paper from responsibly developed and managed Indonesian plantations. WWF also is working with other Indonesian pulp and paper producers willing to adopt better practices to bring more options to the marketplace.

Many responsible companies are already showing leadership. One of the easiest ways that companies and consumers can help is by buying tissue products made with fiber certified by the Forest Stewardship Council (FSC) or 100 percent recycled fiber to ensure they aren’t contributing to forest destruction, and urging retailers to stop selling brands linked to destructive practices.

ABOUT WORLD WILDLIFE FUND
WWF is the world’s leading conservation organization, working in 100 countries for nearly half a century. With the support of almost 5 million members worldwide, WWF is dedicated to delivering science-based solutions to preserve the diversity and abundance of life on Earth, halt the degradation of the environment and combat climate change. Visit http://www.worldwildlife.org to learn more.