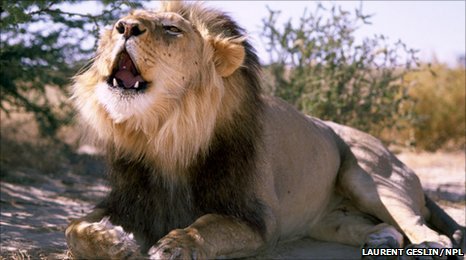 Lion and leopard numbers in Tanzania will crash unless fewer big cats are killed by trophy hunters.

Trophy or ‘sport’ hunting can be used as a conservation measure, with the money hunters pay being used to help protect a wider population of animals.

But even in Tanzania, which is open about how much trophy hunting it allows, too many big cats are being killed and of the wrong age.

So say conservation experts who have published a new study of the industry.

Tanzania holds most of the remaining large populations of African lions (Panthera leo), and also has extensive areas of leopard habitat (Panthera pardus).

Vast areas of the country have been set aside as ‘hunting blocks’, in which private companies facilitate trophy hunting by tourists.

Strict quotas are set for how many big cats can be taken, and the companies are expected to manage the land and prevent poaching.

Tanzania currently allows about 500 lions and 400 leopards per year to be killed for sport across a total area of 300,000km².

The idea is that allowing a small quota of cats to be hunted will help safeguard the future of the overall population of each species.

But a new study by lion expert Professor Craig Packer of the University of Minnesota, Saint Paul, US and colleagues in the US, UK and Tanzania has found that the rate of trophy hunting of big cats in Tanzania has been too high.

Evidence comes from a survey of lion harvests in the country between 1996 and 2008 which found that the number of lions hunted fell by 50%.

Those hunting blocks that ‘harvested’ the most lions initially suffered the steepest declines, according to the study published in the journal Conservation Biology.

In contrast, lion numbers remained stable in most tourist areas where hunting is not allowed.

“Hunting off-takes in the late 1990s were unsustainable,” Prof Packer told the BBC.

Across the country, the numbers of leopards killed for sport has remained relatively stable, though there have been declines in northwest and around the Serengeti.

It is not clear why, but it could be that hunters are putting more effort into killing leopards as lion numbers fall.

The researchers recommend that new, much smaller hunting quotas are set.

Tanzania should reduce quotas to 0.5 lions and 1.0 leopards per 1000km² per year, the scientists say. Slightly higher quotas would be acceptable in the Selous Game Reserve, the largest contiguous hunting area uninhabited by people.

They also say that only older cats should be hunted.

“It would be best to limit off-takes to male [lions] that are at least 6 years old,” says Prof Packer.

“For many years, companies filled their quotas by shooting immature males, and males that were in their prime of life.”

That doesn’t work, as lions are infanticidal; males that has taken over a pride will kill the offspring of their predecessors, so by removing a breeding male from the pride, his offspring are likely to die too.

“If this happens on a regular basis, recruitment rates plummet and the entire population will decline. By limiting off-takes to older males, the ‘ripple effect’ from infanticide is minimised,” says Prof Packer.

Only leopards that are 7 years or older should be hunted, the researchers recommend.

Although necessary, this might be challenging as leopards are harder than lions to age by sight alone.

If these recommendations aren’t met, “trophy harvest will continue to decline and Tanzania will lose potential revenue from sport hunting, thus diminishing the economic rationale for setting aside so much land for conservation,” says Prof Packer.

Overall, he says “the Tanzania government should be congratulated for making their harvest data available. Most other countries conduct trophy hunting in a shroud of secrecy. Zimbabwe and Zambia need to join Tanzania in a new spirit of openness.”

What is more, Tanzania has adopted new rules designed to enforce the minimum age at which lions can be shot.

“If the age-limit is effectively enforced, lion populations should quickly recover from the effects of past hunting practices,” says Prof Packer.

However, while some well-financed hunting companies have invested heavily in relatively small reserves, and helped restore them by careful management and preventing poaching, it remains to be seen whether larger scale hunting operations are working, he cautions.

“I fear that companies in most parts of Africa operate on too small of a budget to have the necessary impact to protect more than a tiny fraction of their holdings.

“The Selous Game Reserve contains over 40 of these blocks and is the most important hunting area in the country.

“But the government receives inadequate revenue from the hunting companies to pay the salaries of their game scouts.”

Cougar’s First Visit is his Last

Poor Care, Neglect, or Worse, What Killed the Big Cat?

Poor Care, Neglect, or Worse, What Killed the Big Cat?