Victim in Vegas Lion Attack on the Mend 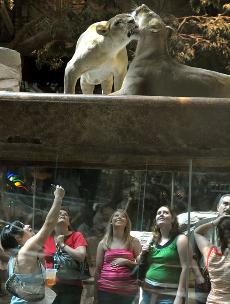 The normally docile lions are a big attraction at the MGM Grand in Vegas.

A man who worked at the popular Lion Habitat at the MGM Grand Hotel & Casino in Las Vegas is “doing well,” after being attacked by one of his charges, Yvette Monet of MGM Resorts tells me.

The incident, which happened without warning as lionkeepers worked inside the glass-walled Habitat Sept. 1, was captured on video. He looked to be bitten on the leg, though MGM says it cannot discuss details.

An MGM statement says that the Habitat is not run by the casino resort and that “the Habitat operator tells us that the handler is in good health and anxious to return to work.”

The Habitat, off the casino, is one of Vegas’ most popular free attractions. The MGM statement says that “the lions do not live at the hotel. They are provided by Keith Evans, a contracted animal expert, and housed at an off-site facility. The animals are displayed on rotating shifts at the Habitat … Most of their time is spent at the large desert compound where they live. The trainer involved in this incident was treated and released from the hospital. … Incidents where animal handlers are bitten are very rare.”

Take a look at a YouTube video of the attack, shot by a visitor, at
http://www.youtube.com/watch?v=gW_x-2MXrkI