Walking with and Petting Big Cats in Africa – Is It Right?

The exotic animals of Africa are what draw so many people to this vast continent, and that draw was definitely one of the reasons that I came on this trip, so I couldn’t pass up the opportunity to see a few of the local animals up close and personal, booking a trip for the next morning that would allow me to interact with lions, cheetahs, and even a caracal (basically an African lynx). The morning began with another short drive from my campsite down the road, near where the rafting began the day before. I was joined by only six other people, given a few basic instructions and warnings before beginning our day. We were given long walking sticks that we were told to use to basically just distract the lions if they turned and looked aggressive, since the mostly domesticated animals were usually just looking for something to play with. The center we were visiting, like many others, usually takes in orphaned or troubled animals that may be in danger due to their habitat or other factors such as farmers seeking vengeance for lost livestock.

Beginning our walk down a dusty red path into the dry bush, we soon saw the three lions that we were to meet, laying lazily on the dirt, rolling back and forth every once in a while with a trainer standing above them. These experiences typically use slightly smaller, younger animals, and though these lions were only 20 months old, they were still very large and strong. As the trainer introduced them, he assured us that if we followed instructions, we’d be in good hands, proving it to us as one of the lions licked his hand while he spoke to us. Even so, we all knew in the back of our minds that these are still wild animals, and I had just heard a story the night before from a group member who did a similar experience the day before in which she tripped while near the lion, falling to the ground and immediately the lion’s natural instincts kicked in, completely changing its mood and stance before the trainer could jump in and grab a hold of her collar before anything could happen. Nevertheless, the majestic felines were a beautiful sight, laying just a few yards from where we stood, yawning and stretching in the morning sunlight. Seeing them in zoos before was impressive, but it couldn’t compare to standing at the foot of the king of the jungle.

After our introduction, we were asked for someone to volunteer to be first to pet the lions, and I jumped at the chance while most of the others were a little hesitant. As instructed, I approached the lion from behind (which seems counter-intuitive to me) and talked to it as I stroked firmly along the back of the animal, pushing hard to let it know I was there, since the problems often come when it just senses something small behind it and turns to push it away, thinking it might just be a bothersome bug or something. The other important thing is to not completely get down to their level, as then you lose your sense of dominance. Also, just like any other animal, it can sense your mood and/or apprehension, so it’s important to be confident around them. Stroking the somewhat soft, golden fur of the lion, I could also feel the thick skin below, realizing that this was a potent predator. Luckily these lions weren’t fierce at all, and I couldn’t believe how calm it was, obviously not caring too much about all of the people around. Smiling from ear to ear, I petted the other two lions as well, posing for pictures and just staring at the beautiful features of the cats, from the powerful claws to the pretty face.

The lion walk, as it’s called, continued with us walking down the path for nearly an hour with the three lions, stopping at spots when they wanted to play and to take a few pictures, each of us in disbelief of this magical experience. As we got more and more comfortable with the lions (and they with each of us), I even got to hold the tail of one of the lions as we walked along, letting it guide me around the circular path. At the end of the hour, we finally had to say our goodbyes to the gorgeous creatures, though we were moving on to another exciting part of the tour as we passed back up to wash up and then move on to the cheetahs.

Unlike the lions, the cheetahs were kept in a fenced enclosure, and we simply entered in and walked up to the long, lean cats, laying down in the shade as the heat of the day was coming in. The lions we had played with were still adolescents, but since cheetahs aren’t as dangerous, these were actually fully grown cheetahs, about 5, 7, and 9 years old. Each of the three cheetahs looked up to investigate our arrival, though they also didn’t seem threatened by this group of humans, so they went back to their morning rest as we approached. The brilliant coloration of the fur revealed beautiful black spots patched among the yellowish background, along with a regal looking black strip running down the face from each shining orange eye. We were told about the history of each of the animals, mentioning the personalities and moods of the three cats, named for kings Solomon, Shaka Zulu and one other one.

As before, we were allowed to pet the cats, though with the lions we were told to only pet the backs and sides, but with the cheetahs, they enjoyed having their head and neck scratched, just like house cats. Again, I couldn’t believe that I was actually crouched down next to one of these beautiful creatures, petting a cheetah as it purred in delight while I scratched the soft fur under its neck. Shaka didn’t prove to be quite as friendly, hissing and growling at us frequently, though just trying to establish dominance and never actually intending on actually getting up from his comfortable spot on the shaded ground. We took picture after picture and again the time passed so quickly, soon enough being the end of our 30 minutes with these sleek, slender animals.

Finally, we stopped by the caracal enclosure, finding a very friendly, sociable cat about the size of a medium-sized dog, pacing around its cage, anxious for us to come inside. An African version of a lynx, the golden brown cat has long ears with black tufts at the points, along with a short tail and long back legs. It is also apparently fairly mean and vicious in the wild, though this domesticated one was obviously happy to have visitors. We entered the cage, and the caracal circled around each of us, rubbing up against our legs and trying to greet everyone in the pen. Though the lion and cheetah were fairly soft, this one felt almost the same as a house cat with a lovely short coat and a penchant for being petted. We only had a few minutes with the caracal and were soon back on our way to the hotels, but I couldn’t believe what an unbelievable experience it was to be able to actually pet and interact with lions, cheetahs and a caracal. From cuddling with kangaroos and koalas to hugging a panda and walking with lions, these wildlife experiences are always one of the highlights of my trip, and I was really glad that I got to enjoy this one (even though my tour has another cheetah encounter later on in the itinerary, but that will just be a bonus). 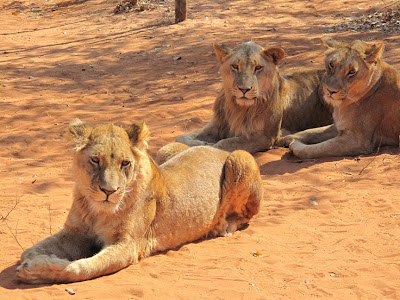 (The three beautiful, 20 month old lions that we got to interact with as a part of the lion walk.) 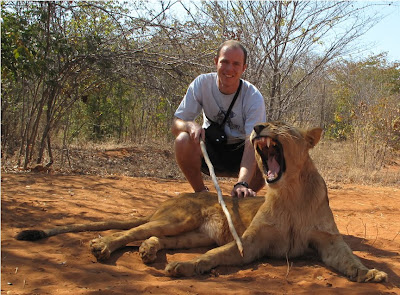 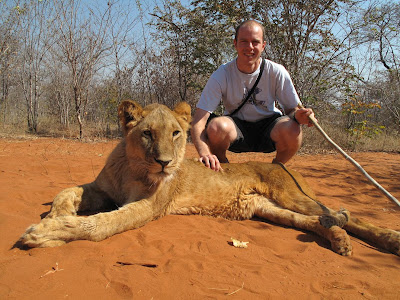 (After a little introduction, we were given that long walking stick to distract the playful animals if they seemed to be looking at you in an aggressive way, perhaps picturing a nice big human steak.) 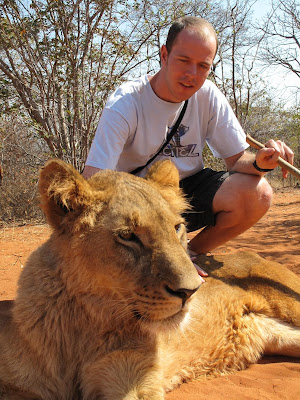 (Luckily the mostly domesticated lions were very calm and nice, allowing us to pet them along their back and sides. We were instructed to pet hard and talk to them the whole time, so that they feel your presence and don’t think it’s just an annoying pest….which we probably are.) 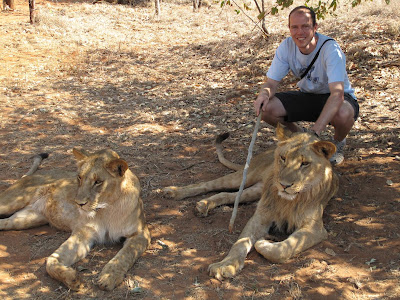 (For about an hour, we got to follow along with them, walking ahead of and behind them as they made their way down the dirt path in the bush.) 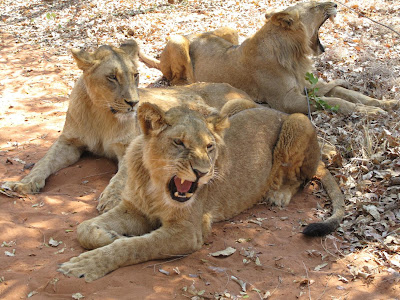 (This was such an incredible experience to be able to literally reach out and grab these powerful and adorable creatures.) 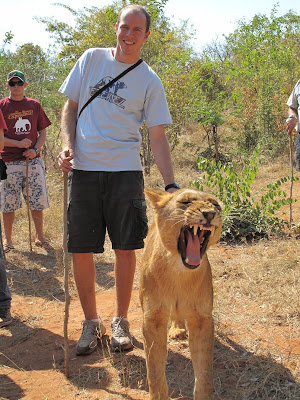 (Looking really ferocious. And the lion doesn’t look bad either.) 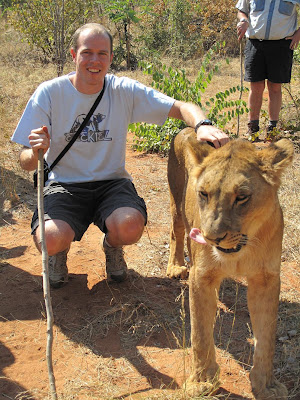 (Licking his chops, perhaps planning out a nice meal of seven tourists. Our fairly small group and three lions meant we had plenty of time to play with the cats.) 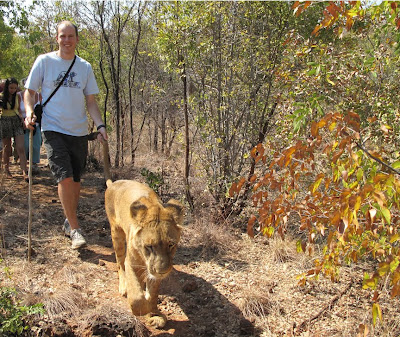 (This one even let me hold on to his tail (with the trainer’s permission) as we walked along the path.) 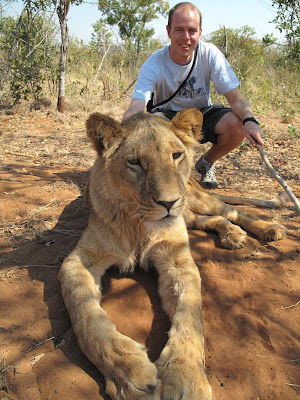 (Though only 20 months old, these lions were quite large and strong.) 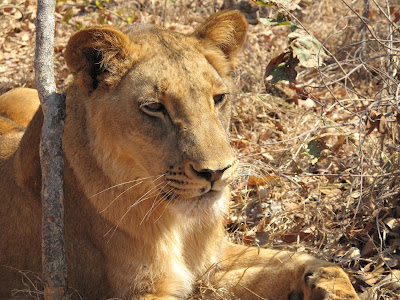 (One last shot of the beautiful lions.) 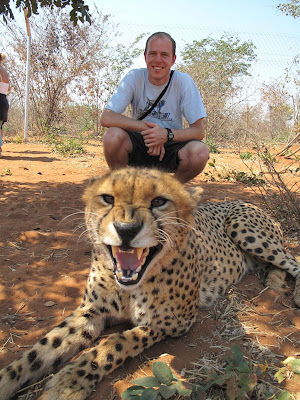 (Next we moved on to a large enclosure with three full-grown cheetahs. Though this guy liked to hiss and growl, he didn’t even get up from his shady spot in the dirt.) 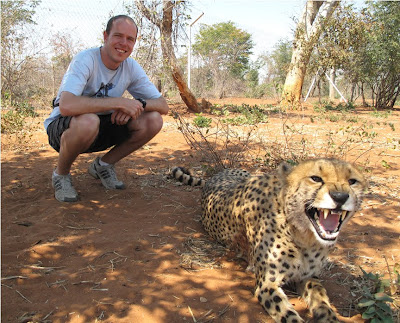 (Since he was in a little bit of a bad mood, we didn’t pet Shaka Zulu.) 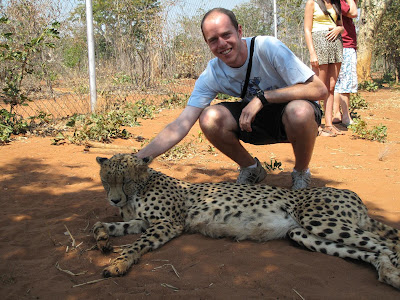 (Solomon, on the other hand, was happy to have us scratch his head and neck, purring along in approval.) 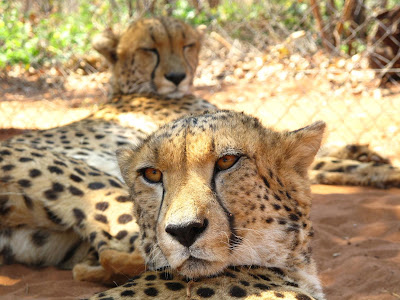 (Two of the extraordinary cheetahs looking off in the distance. How stoic of them.) 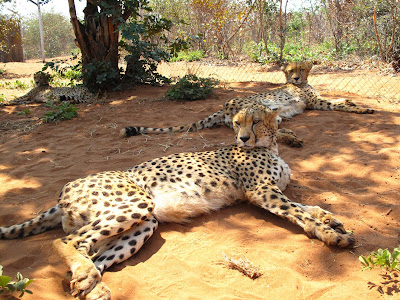 (Though full grown, these long, lean creatures don’t pose as much of a threat to humans, but I’m sure they could still do some damage if they wanted to.) 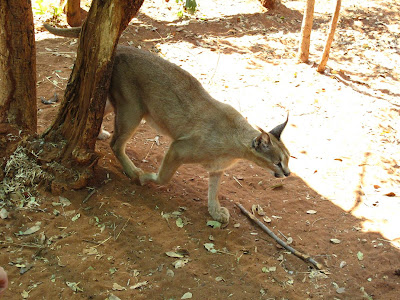 (And finally the caracal, a cute African lynx about the size of a dog. This one was very sociable, coming up and rubbing against our legs and getting petted by each of us. The fur was also nice and soft, just like a house cat.)