Why Cats Kill Their Own

by BCR
in News World
0
0
SHARES
1.3k
VIEWS
Share on FacebookShare on TwitterShare via Email

Why infanticide can benefit animals 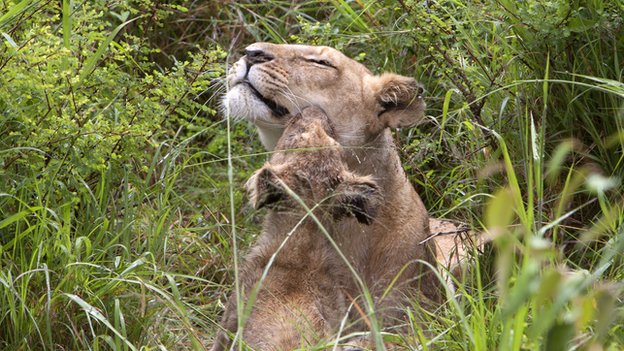 Infanticide is a powerful tool in ensuring the survival of a species, researchers are increasingly finding.

It sounds like the cruellest thing of all – mothers and fathers brutally killing their animal offspring.

But for many animal infants, the greatest threat to their survival they face is from their own kind.

“It’s not like a predation event, which is quiet,” says lion expert Professor Craig Packer.

“During infanticide, it’s growling and violent, and really pretty disturbing,” he says, describing how adult lions kill cubs. “They bite them on the back of the head, and neck, crushing their abdomens.” 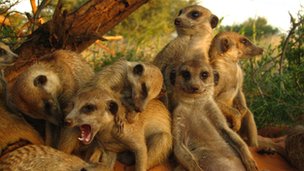 Infanticide is an often overlooked way of ensuring the survival of the fittest. It has been recorded in a number of species including mammals such as rodents and primates, and fish, insects and amphibians.

Scientific research shows it can provide benefits to the perpetrator, such as increased reproductive opportunities, access to limited resources, direct nutritional benefits, or the prevention of misdirected parental care.

Baby animals are often protected by their fathers, with male protection playing an important role in infant survival.

But when new males arrive on the scene, everything can change.

Male interlopers attempt to overthrow these fathers. If they succeed, by hurting, chasing off or even killing a previously dominant male, and taking over the leadership of their group, then infants are suddenly placed at great risk.

Because males who have arrived on the scene often only want one thing – to have their own children with the mother. 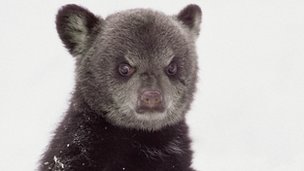 In lion society, for example, killing infants results in their mothers becoming quickly fertile again, increasing the chance of the new males having offspring.

And if they don’t kill any infant males that are not their own, they run the risk these cubs will grow up and stage their own coup.

But it’s not only male animals who kill young. Females do too, says Professor Tim Clutton-Brock, from the University of Cambridge.

“Females kill each other’s babies just as readily,” he says.

Female rats eat other female’s kits for sustenance and then take over their nests for their own litter. Mother rats also kill their own if they are deformed or wounded, to allow them to allocate resources to their other offspring.

Infanticide can also increase an animal’s reproductive success, by reducing competition for its offspring. Female burying beetles kill off their rivals’ larvae before their own hatch to ensure their survival.

More than 40 species of primates are known to commit infanticide, but in many species females have a strategy to reduce the risk, a study in the Journal of Theoretical Biology found.

Paternity confusion is used – where female primates mate with multiple partners so the males don’t know who is the father.

Infanticide in the animal kingdom: 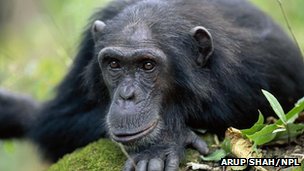 This gives their young the best chance of survival when new males try to integrate into a group.

“In a multi-male group, in primates such as baboons, if two males breed with a female and neither knows he was the father, that would reduce the risk of infanticide,” says Prof Clutton-Brock.

For changes in the dominance hierarchy “infanticide occurs only where the chance for the killer to sire the next infant is high”, the study says.

Meerkats are co-operative breeders, where there is an alpha male and female who breed, and other “subordinates” help raise the young.

Dominant females are known to kill subordinates’ young, and they too have been known to kill a top female’s young if they have a litter of their own.

But male meerkats do not get blood on their paws.

Prof Clutton-Brock says: “Meerkat males have never shown infanticide, because as soon as (females) have babies they are ready to mate again. So killing infants doesn’t get a male anywhere.”

That’s in contrast to lions, where females spend up to 18 months lactating after giving birth.

Nomadic males, or coalitions of males competing for control of prides, are known to kill cubs in order to bring the mother back into season and sire a child with her.

The Marsh Pride of the Masai Mara in Kenya is currently being filmed for the BBC programme Planet Earth Live, which is following the fate of young animals around the world during the month of May.

Colin Jackson, a BBC producer on Planet Earth Live, says the programme team has been following a single lioness with one cub, called Moja.

“I believe historically, prior to us beginning to film, she probably had three (cubs), and that is more normal for a lioness,” he says. He believes Moja is under threat from other lions in the area.

“A male lion coming across her and her cub could well be tempted to the killing of the cub in order to bring her back into oestrus and mate with her.” 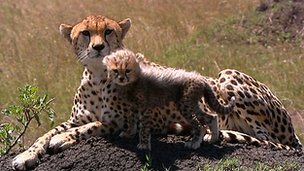 Cheetahs avoid infanticide by having litters sired by different fathers

Programme consultant Professor Craig Packer has worked with 25 prides in Tanzania over the last 35 years.

He says DNA testing on the many litters of lions he has studied shows every cub in one litter is fathered by the same lion.

This is in contrast to cheetahs where every single litter has multiple paternity.

Two males will mate with a female cheetah and essentially mix sperm inside her, each fathering some of the cubs.

“As far as I can tell, male lions don’t seem to be able to recognise their own children, but if they are part of a coalition they will protect all the cubs,” he says.

Lion cubs are often looked after in crèches, and lionesses in a group can defend against males, chasing them off by biting their rear ends.

But if they don’t manage to do so, they may be faced with finding their dead young.

“If mothers find the carcass of the cubs, they will eat the carcass, and although cannibalism in lions is rare, they see it as a safe meal, of fresh healthy meat,” says Prof Packer of the University of Minnesota, St Paul, US.

Although this act of cannibalism is difficult to comprehend in a human context, when meat is scarce, in the natural world it can make all the difference to whether other members of a family survive.