Will the Utica Zoo replace Minona the tiger?

by BCR
in News @ BCR, News World
0 0
0
0
SHARES
91
VIEWS
Share on FacebookShare on TwitterShare via Email 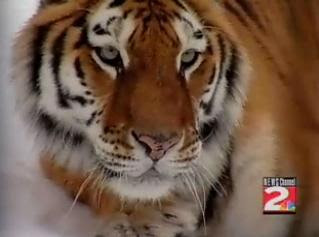 UTICA, N.Y. (WKTV) – One of the most popular exhibits at the Utica Zoo is now empty. Minona, the zoo’s only remaning Siberian Tiger had to be euthanized this week due to illness.

Zoo spokesperson Beth Irons announced on Friday that Minona had to be put down due to the advanced stages of kidney disease. She lived to be eleven years old. Minona came to Utica with her sister Wingra from a zoo in Wisconsin when they were just two years old back in 2001.

Irons says both lived beyong their life expectancy. She said “seven to nine years is the expected life expectancy for siberian tigers, we have been blessed, that they get such exemplary care here, that they enjoyed an extended life with us.”

The zoo has had its financial woes over the past few years, as funding has often been cut, but zoo officials have managed to keep the quality of the zoo up, but now the question, will this tiger be replaced?

Irons says she hopes so. She said, “the exhibit originally was through the generosity of Senator Donovan. We were able to build the exhibit back in the 90’s, and it is one of our showpiece exhibits so we will be fielding some new projects to wrap it up for a new species.”

Irons adds, “The Utica Zoo is involved in what are called SSP’s which are Species Survival Plans. They’re global breeding programs designed to help propagate endangered species, which unfortunately all of the currently existing tiger species in the world are endangered, so it’s not just a matter of clicking on a website and ordering a new tiger.”

Irons says the zoo is hoping for possibly another species of tiger to populate the tiger exhibit sometime later this year.