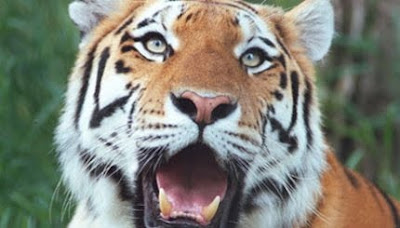 It was meat, meat and more meat on the menu at a birthday party held at the Calgary Zoo on Friday.

Kita, a Siberian tiger, is feeling much better these days, and to celebrate her health, the zoo marked her 15th year.

Kita was fighting a chest infection that zoo veterinarians aggressively treated with antibiotics. The big cat is eating normally again and increasing her activities, said staff.

“Fifteen to 17 is usually the lifespan for a tiger in captivity, so she’s certainly around that time.”

In light of Kita’s advanced age, the zoo thought it was a good time to throw her a special party.

“We don’t do it for everybody or we’d be having a birthday every day, but 15 is a significant age for a tiger,” said Exton-Parder.

The animal was born at the Toronto Zoo on Sept. 3, 1995, and was brought to Calgary when she was one year old.

Kita is one of four tigers at the zoo, along with her daughter Katja, son Vitali and recent addition Baikal.

SC to decide on night traffic in tiger reserves