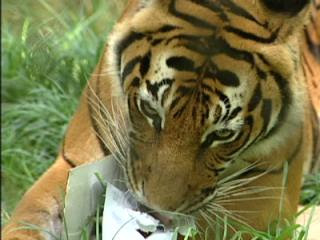 A recent article in the Wall Street Journal highlights a lesser-known fact about lions, tigers and other big cats. They love perfume.

The article focused on scientific research done at the Wildlife Conservation Society’s Bronx Zoo, where they found that large cats there, in particular their 450-pound Siberian Tiger Sasha, were attracted to Calvin Klein’s Obsession for Men.

So, Live at Five at Four wanted to know: What scent would our tigers at The Knoxville Zoo go ape over? We teamed up with the Zoo staff to stage our own research project and the results would make Elizabeth Taylor proud.

Cats, by nature, are attracted to the musk found in perfumes. “Usually the stronger the scent is the type they like the best.” says Caryn Wachenfeld, Carnivore Keeper at The Knoxville Zoo. “I did a study with about 20 perfumes and spices and our tigers especially loved the perfumes. They loved the perfumes about 70% of the time I used it and 0% for the spices.”

Okay. But why do the cats like perfumes over the spices?Wachenfeld says it’s the musk.

“In the wild they would use the scent marking and the rolling for marking their territory and also they’ll the different scents for breeding and see if another female’s in heat, the male would be able to come into the territory and see that. Probably the perfumes kind of mirror that in the zoo,” stated Wachenfeld.

The perfumes are also used as part of the enrichment program for the tiger. It can also entice the animal out into the open so visitors can see it better. “Our Bengal Tiger Callie will go right out to the perfume. That’s actually how we get her out to do her painting for our art auction. We actually get her to paint with perfume.”

Our apologies to Calvin Klein.