Another visit to the human zoo, this time also containing animals, and a new probationer in orange overalls The cause: a chimp, young but already powerful and, in the tentative Theroux embrace, threatening at any moment to remove, by force, the popular proboscis of documentary television’s leading metropolitan ironist. Did Louis not like that. Later a larger chimp was let out to play and this time Louis was content to watch from afar as the simian ran considerably amok, smashing inter alia the window behind which he had diligently retreated. Even the chimp’s owner slipped into Anglo-Saxon. “I think we have what we need,” whimpered a manful Louis, containing the urge to soil himself.

And then there were the cats. None of them moggies. An Indiana zookeeper dragged over his Siberian tiger, promising interaction. “We should probably have talked this through,” suggested Louis through a crack in a door.

The prairies of the Midwest have been a happy hunting ground for Theroux. They teem with big game of the sort who fit neatly in his crosshairs. But in recent outings Louis’s merciless pursuit of the great-maned American weirdo has started to look a little tired. In the end, one fruitcake is just like another, swimming amniotically in bile, chainmailed in braindead delusion. It’s all felt a little bit like schlepping round the block again.  Louis munches on another bag of nuts. Louis’s season ticket to the human zoo.

But this was different. In a helpful contribution to the show’s pre-publicity, an Ohio zookeeper lately let his menagerie loose before killing himself. For once the ostensible subjects of Theroux’s researches could not answer his keynote question – how does it feel to be banged up? It was left to their jailers to do the talking. As usual Louis was unable to persuade them to see reason. One zookeeper was bringing up a bear and tiger together, as if trying to rewrite The Jungle Book. Another owned 156 tigers. Various of them are breeding with lions to spawn a new super-race of feline labradoodle. The zookeeper playing God was called Joe Exotic. Possibly not a family name. Misfits is back for a third series, missing Robert Sheehan whose absence was carefully explained in an eight-minute segment screened online a few weeks back. Last night a new character called Rudy came off the subs’ bench. As played by Joseph Gilgun(pictured right) with a fruity Mancunian accent, he is just as gobby; in fact twice as gobby, given that his special power is to split in two and represent two diametrically opposed points of view at the same time. It’s not much of a gift. As if trapped in an early Shakespeare comedy, he keeps getting blamed for the stuff perpetrated by his doppelgänger. Two comely new female characters were dead and buried by the end of episode one thanks to this unfortunate tic.

We are advised by the honchos at E4 Towers that the surviving quartet will be taking on new powers in this fresh run-out. Curtis can turn into a girl, for instance, which sounds like fun. Perhaps Kelly will turn into a lady. According to Wikipedia, she acquires “and [sic] ability of hightened [sic] inteligence [sic]”. Which she should maybe pass around. The back-of-the-class sniggerers whomMisfits is keen to impress will note that there’s been no change in series creator Howard Overman’s Tourette’s. Last night there was much discussion of cock monsters and pussy meisters and unprotected anal sex. Better out than in. 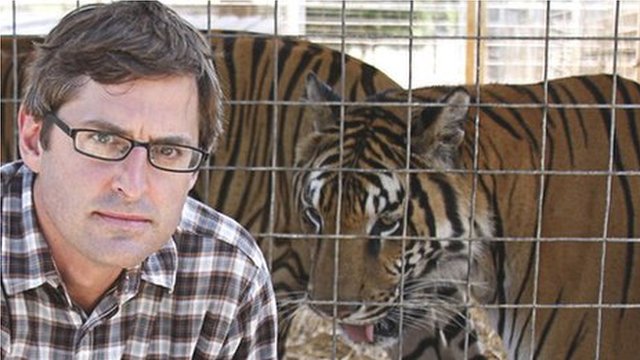 There are more tigers in captivity in the US than in the wild in the whole of Asia, according to some estimates. But the trade in exotic pets has dangerous consequences for man and beast alike, writes Louis Theroux.

I was in the back garden of an elegant home in rural Missouri with a ticklish question hanging in the air. Should we let the big chimpanzee out of his cage?

For several weeks I’d been on a kind of suburban safari, on the trail of America’s large and growing population of exotic wild animals that are kept as pets.

In Indiana, I’d had a close encounter with a baboon called Tatiana. I’d also spent several days getting to know a few of the more than 150 tigers at an “Exotic Animal Sanctuary” in Oklahoma, though mostly through the bars.

But this chimpanzee, called Cooper, was a step up on the exotic animal danger-scale. He belonged to a couple called Jill and Brad James.

The owners of a funeral home, they’d raised two daughters when they decided to take on Cooper. Later, to give Cooper some company, they added a second, younger chimp called Tukem Kerry into the mix.

Even in the world of exotic animals, chimps are considered somewhat controversial.

Watch Louis Theroux: America’s Most Dangerous Pets on BBC Two at 2100 on Sunday 30 October, or find out more by clicking the link below

Fully grown men who would think nothing of rolling around on the ground with a lion would politely decline the opportunity to get in a cage with an adult chimpanzee. Many are mindful of the infamous “Travis incident”.

Travis, a 14-year-old, 200lb (91kg) chimpanzee, had once been the star of several TV commercials. He lived in suburban Connecticut with his owner Sandra Herold, sipping wine from a stemmed glass and occasionally popping a Xanax. One day in 2009, he viciously attacked a human neighbour, ripping off her face and chewing off several of her fingers.

Chimp owners have been fighting an uphill publicity battle ever since.

Earlier in the afternoon, with a little trepidation, I’d spent some one-on-one time with the James’ smaller chimp, Tukem Kerry. He is only five years old and the size of a human toddler, though much hairier and with long, powerful arms.

Tormented by visions of him biting off my nose or chewing off my testicles, I was relieved when he clambered up onto me to offer nothing more menacing than a hug.

But Cooper is two years older and close to sexual maturity. This makes him much more potentially dangerous, notwithstanding that his testicles are in a jar in Brad and Jill’s garage. 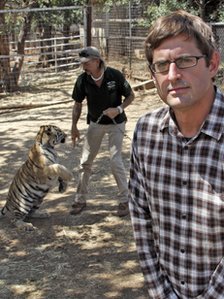 Exotic animal ownership is rampant in the US. According to one oft-repeated factoid, there are more tigers in Texas than in India.

Only last week in Ohio a man with a menagerie of more than 50 animals, including tigers, giraffes and bears, decided to open up his cages and then shoot himself in the head – after being convicted of animal cruelty.

Local schools were closed down while authorities tried to track down the animals. Police shot some of the tigers as they stood rather pathetically (the tigers, not the police) outside their cages.

Quite why anyone would enjoy having an animal that could easily kill him is not easy to say. Why not own a creature you can stroke and cuddle and tease with a piece of string?

Of course, you can stroke and cuddle a baby lion, tiger or chimp, and therein lies part of the problem. Animals that are cute and huggable in infancy later grow into potential man-killers.

Most tiger owners let them roam the house for the first year or so of their lives. After that they are locked up for the rest of their lives, which can be as much as 20 years.

The United States Department of Agriculture (USDA) registered facilities are required to provide “sufficient space to allow each animal to make normal postural and social adjustments with adequate freedom of movement”.

In practice, an animal that roams hundreds of miles in the wild can find itself contained in a space no bigger than a living room.

As for chimps, they get to enjoy their first eight to 10 years with direct human interaction. But after that they too tend to be locked away. Given that they can live to be as many as 60 or 65 years old, that’s a pretty long stretch behind bars.

Some owners tire of their animals as they get older and become too unpredictable to play with. Others run out of money or pre-decease their pets.

Abandoned adult animals end up in sanctuaries. But in one of the paradoxes of the exotics world, some of the sanctuaries that rescue animals also breed animals to defray their expenses – thereby, arguably, making the problem of surplus adults even worse.

As chimp owners, Jill and Brad are in many respects paragons. They have built their hairy friends a large-ish enclosure at the bottom of the garden where they have ropes to swing on, toys and TV to watch.

They say they still spend plenty of time with them. I watched luxuriating in a warm shower, he seemed especially keen on the shampoo (drinking it more than washing with it).

Jill and Brad say they are committed to Cooper and Tukem Kerry for the long term. But even they admit that as the chimps get older, they may have to play with them “through the bars”.

As for my alone time with Cooper, when the time came, though he did come out of the cage, after some soul-searching I decided to “enjoy” him from afar. From the safety of inside the James’ house, with the doors locked.

I watched him as he frolicked in the garden. He rode the sit-down mower, got a coke from the pool-side cabana, then relaxed in the hot tub.

No, I didn’t get to grapple with him.

But on the plus side, I’ve still got my face.