It is with great sadness that we let you know our beloved leopard Jade passed away yesterday afternoon. She was very old at age 20. Jade began feeling poorly this past weekend so she was sedated on Monday for an exam. Nothing too abnormal was found other than that she had a stomach full of food despite having not eaten for two days. She never fully recovered from sedation and was re-examined again Wednesday. The food in her stomach still had not digested. She passed away shortly after she was sedated. A necropsy was performed and nothing too abnormal  was found. We’ve sent samples to the lab for analysis, which may or may not shed more light on her passing.
Run free beautiful girl! You will be missed greatly and loved forever. 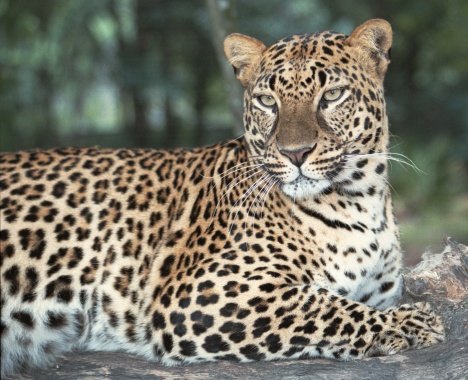 Jade arrived at Big Cat Rescue with her sister, Armani. Jade is definitely the more mischievous one of the two. Like all leopards, she loves to jump up in the branches of the tree that is in her cat-a-tat. Most people have a very hard time telling the two sisters apart, they look so much alike.  But, if you look closely, you can tell Jade from Armani by the V-shaped row of spots on her forehead that look like a tiara.

These two are so beautiful that some of the volunteers refer to them as the “Hilton Sisters.”  Could it be because they just don’t take a bad picture?  Or, could it be that we just love to spoil them so much?

You can sponsor Jade here http://big-cat-rescue.myshopify.com/collections/sponsor-a-cat

One response to “Jade”