Alexander’s father was supposed to be a sterile first generation hybrid so we did not expect Alexander. Alex is one of our more friendly and outgoing bobcats. Whenever keepers are near, he will get right up and begin to follow their movements watching with intense curiosity. Alex was placed with Windsong, who was more reserved than he. His enthusiasm was contagious and soon Windsong became friendly towards keepers as well. Alex is also a bit of a clown and will often do silly things like pouncing at a pile of leaves or a stick on the ground for no apparent reason other than to get a chuckle from anyone who may be watching at the time. After four years of living together with Windsong, the two surprisingly produced Windstar. Although these hybrids are supposed to be sterile, all of our bobcat hybrids were immediately neutered to prevent any more accidents.

Find out how Alexander Bobcat Got His Name 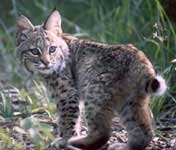 Lynda Licht  Aug 22, 2015
Although you were a shy boy around groups, if my keeper tour was small, I’d take them by you to see you get some enrichment. They could all see how much you enjoyed it and got a glimpse at our handsome hybrid. Thanks for sharing time with us. Miss you much.
Apr 12, 2015
You were a gentle old boy with a heart of gold. What a beautiful little soul you were. Love you little man.
Barbara Zingg
Mar 22, 2015
Alex grew old gracefully He has taught us much. He’s running and rubbing with Windsong. Good journey old man.
Sharon Dower
Mar 18, 2015
You will be missed beautiful “old” man. i am glad I got to know you even for just a little while. I am sure Windsong knew you were on your way and met you on the other side. With much love, Sharon
Previous Post