On May 8, Wayne Pacelle and his fiancee, TV journalist Lisa Fletcher stopped by Big Cat Rescue as they were on the book signing circuit for his new book called, The Bond.  At the age of 23 Wayne Pacelle was appointed as the Executive Director of The Fund for Animals and joined the Humane Society of the United States (HSUS) in 1994.  Mike Markarian, previously of The Fund for Animals and now the president of the Humane Society Legislative Fund, had visited a while back and upon his recommendation several of the CEO’s of HSUS’s five sanctuaries have visited.  Mike had urged Wayne to visit at his next opportunity because he felt that our goals of seeing no more big cats in cages were aligned with their philosophy.

Throughout the tour Wayne kept exclaiming what wonderful work we were doing here.  I was especially impressed with how he took the time to greet each of the staff and volunteers along the path and to thank them for their dedication.  I have visited HSUS’s D.C. and Gaithersburg offices and have visited their sanctuaries in CA and TX and have been pleased to see the level of commitment in their staff and the way they are all working together to “Celebrate Animals and Confront Cruelty.”  With 11 million supporters and an annual budget of 130 million, these people know how to do things right and there is much we can learn from them.

Wayne Pacelle has played a role in the passage of more than 15 federal statutes to protect animals, including laws to ban the sale of videos depicting animal cruelty (1999), protect great apes in their native habitats (2000), halt interstate transport of fighting animals (2002), halt commerce in big cats for the pet trade (2003), and require government agencies to include pets in disaster planning (2006). Through his leadership HSUS has been involved in 26 successful statewide ballot measure initiatives to protect animals, including measures to prohibit cockfighting, prohibit mourning dove hunting, restrict steel traps and certain poisons, and ban inhumane factory farming methods.He has also been instrumental in the passage of numerous state laws dealing with animal protection.

Pacelle is a cofounder of the Humane Society Legislative Fund (HSLF), a 501(c)(4) social welfare organization that lobbies for animal welfare legislation and works to elect humane-minded candidates to public office. He also cofounded Humane USA, a strictly nonpartisan political action committee (PAC) that supports candidates of any political party based on their support for animal protection. I serve on the board of Humane USA with Mike and Wayne and am always looking for those who get the big picture and understand that the only way to end the abuse of big cats is through legislation.  These two organizations have helped to defeat hostile anti-animal lawmakers in Congress, including Rep. Chris John of Louisiana (2004), Rep. Richard Pombo of California (2006), and Senator Conrad Burns of Montana (2006).

Decent people don’t enable animal abuse, so even though our focus is on humane legislation, everyone benefits if our government is run by decent people...but I digress.

It was wonderful to be able to introduce our beautiful sanctuary and even more beautiful people to these two men that I hold in such high esteem.  Wayne’s visit followed another such opportunity that we had to share our refuge, training materials and our awesome support crew on May 2nd and 3rd.

After Patty Finch, the director of the Global Federation of Animal Sanctuaries, had done a site visit for our accreditation, she came away with a different point of view. Says, Patty, “I came to Big Cat Rescue expecting to hate it.  I just didn’t believe that it was right for a sanctuary to allow the public in, but once I saw how peaceful it was and fully understood the educational value that comes from people meeting these animals, I wanted to share the experience with other sanctuary leaders.”

After delivering a couple of free webinars for GFAS, Patty asked if we would host their first in person 2 day Workshop.  Howard Baskin presented on our fundraising streams and the history of Big Cat Rescue, Jeff Kremer presented on donor recognition while giving the group of 20+ attendees a tour, Chris Poole spoke on social marketing and networking, Patty Ragan shared the value of hiring a coach, Kari Bagnall illustrated how to get the most out of a tabling event, Patty Finch taught grant writing, teaching your board how to be helpful and how to avoid “founder’s syndrome” and I shared how we use google Apps, how we manage over 100 top notch volunteers, why it is important to have a plan and stick to it.

I really enjoyed meeting the key people from so many of the world’s best sanctuaries and believe that this workshop was just the beginning of all the great work we can do to help all kinds of animals.  Already the group has set up a collaborative group online where we can share ideas.  Here is what a few others had to say about the experience.

“I received so much useful information and help at GFAS. I am currently working with the information to begin a volunteer program at Mindy’s, which we are sorely in need of. I feel that I now have the support and guidance to accomplish this task.” Nancy Eno Primate Caretaker, Mindy’s Memory Primate Sanctuary www.mindysmem.org

“I am thrilled to have been invited and experience two wonderful days at Big Cat Rescue. Carole Baskin and her staff are doing such good work on behalf of big cats. I hope I can implement all the great things I learned during those two wonderful days. I know the horses at  Equine Voices will truly benefit from the knowledge shared by Patty Finch, Carole and the others”… Karen Pomroy, Founder Equine Voices Rescue & Sanctuary www.equinevoices.org

“Before visiting Big Cat, I was unsure about the idea of charging admission to the public to see animals living in a Sanctuary.  After visiting Big Cat, I understand that it is not only a great opportunity to educate the public, but also a source of funding to help sustain the quality of care at a top notch facility.  The workshop provided me with a broadened vision for the future of our own Sanctuary and the tools to get there.” Matt Smith, Executive Director The Central Virginia Parrot Sanctuary http://www.projectperry.com/perrys_angels.php

All of these people, from those leading multimillion dollar animal rescue organizations to those advocating for animal friendly lawmakers to those who are leading world class sanctuaries and those who are building strong coalitions of animal sanctuaries, are celebrities in their own right.  There is even more celebrity news in the works so be sure to stay in touch with us so that you will be the first to know.  Be sure to join us at BigCatRescue.org

Cougar Sounds or Hello from Narla

How to tell the 5 new servals apart

Tragedy struck the sanctuary on Monday 9/13/2010 when Jamie found Storm, the baby rehab ... 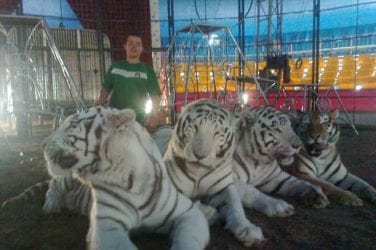 Are Zoos as Bad as Circuses? That’s a question people usually ask me, or ...