There is no Barbary Lion project any more.  Only 5 lions were determined to have had sufficient Barbary or Black Mane DNA to have been candidates for bringing this species back from the edge of extinction.  The only female was Sarabi at Big Cat Rescue who died from cancer in 2007.  It is unlikely that the four males identified are still living.  The following was the attempt made to save this beautiful lion by the King of Morocco, but when he died the dream died with him. 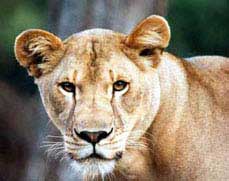 An extinct breed of lion from North Africa was held at the Tower of
London in medieval times, a new study shows.

A pair of skulls unearthed from the tower’s moat in the 1930s belonged to Barbary lions, a subspecies that has since died out in the wild.

The discovery raises the possibility that descendants of Barbary lions may still survive in captivity, which could help efforts to resurrect the dark-maned breed, researchers say.

The lions’ North African roots were revealed by analysis of mitochondrial DNA, a genetic marker passed between females.

What’s more, the DNA reveals that the two animals represent the oldest confirmed Barbary lion remains in the world, the study team said.

The findings are reported in the current issue of the journal Contributions to Zoology.

Radiocarbon dating of the lion skulls in 2005 indicated that the two male cats first came to the tower in the 13th century, the oldest being dated to between A.D. 1280 and 1385.

At that time the palace housed the Royal Menagerie, a diverse collection of exotic animals owned by the reigning monarch.

Carcasses of dead animals from the menagerie were likely thrown into the moat, where they became buried in silt, said study team member Richard Sabin of the Natural History Museum in London.

The DNA analysis supports historical evidence suggesting that Barbary lions had an ancient presence in Europe, he added.

“We know that the Romans were exploiting the short distance across the Mediterranean to North Africa to take animals for gladiatorial games and exhibitions,” he said. (See a map of the region.)

“The Barbary lion population had been exploited for at least a couple of thousand years. It was quite easy for people to nip over from Italy, Spain, and Portugal to pick them up.”

The last reported Barbary lion in the wild was shot in the Atlas Mountains in northwest Africa in 1922, Sabin said.

Since then, hopes of reviving the subspecies have focused on captive lions, especially those showing signs of the Barbary’s most distinctive feature: a noticeably long, dark mane.

“Because we have these good genetic samples from known purebred Barbary lions, we can compare DNA from those ancient specimens to the ones that potentially are still alive in zoos today,” Sabin said.

“There may be descendents of them still in the U.K. in zoos and wild- animal parks, but this is something that would need to be ascertained through genetic study.”

Yamaguchi, who co-authored the new study, says that to date no living Barbary lions have been confirmed in captivity, despite various rumors to the contrary.

While he says the Tower of London find doesn’t directly assist his search, he hopes it might help widen the net.

“For example, once many people know that a DNA test would be available for checking if a lion might be a Barbary, museums and zoos may want to carry out the test,” he said.

“In this context, our recent works can provide the key if people would like to open the door.”

Lions have been known to breed well in captivity—even when kept in unsuitable conditions, such as those before the 20th century— Yamaguchi noted.

“Therefore, it is natural for people to consider that there must be some zoo lions today that carry the Barbary blood,” he said.

The long-term aim, he added, is to return the lion to part of its former range in North Africa.

Barbary lions, extinct in the wild since the 1920s, may make a comeback thanks to scientists in Britain.
By Alexander MacLeod , Special to The Christian Science Monitor

At first glance, the playful bundle of fur with tufted ears and stretching claws could be any other lion cub.

In fact, Saffiya (Saffi for short) who is approaching her first birthday, is very special.

She may hold answers to two questions that continue to nag at the minds of animal researchers:

Is the Barbary lion, believed to have been used by the ancient Romans to kill Christians in the arena, really extinct?

And, if there are lions still carrying its genes, can genetic fingerprinting (or should that be “pawprinting”?) be used to bring these beautiful big cats back from the brink of oblivion?

Kay Hill, founder of the conservation charity Wildlink International, based in Essex, England, says she has “high hopes” that genetic testing currently being carried out on lions and lion tissue in several European countries will “result in a major breakthrough.”

“It is a very exciting project,” says Ms. Hill. “Barbaries are such wonderful animals.

“Whenever people think of a lion, they think of a Barbary…. But it is important to carry out precise research ahead of a breeding program. Many believe any lion with a black mane and dark chest hair is a Barbary. That isn’t true. Only DNA testing can prove the lineage of a Barbary.”

New additions to a noble line

Saffi’s father is Kabir, known to descend from the Barbary lions owned by the king of Morocco when the last known Barbary in the wild was shot in the 1920s. Her mother is Jade, whose pedigree runs from the same source.

Both lions are held at Port Lympne Zoo, in Kent, where Saffi was born last July. In a further sign of success, two more cubs, as yet unnamed, were born to the pair early this year.

A full-grown male Barbary lion is said by historians to have weighed more than 500 pounds, compared with less than 400 pounds for today’s male African lion. A Barbary could measure 10 feet from its ears to the tip of its tail. It reached Rome from North Africa more than 2,000 years ago.

“It is probable that the Romans used Barbary lions in their gladiatorial contests,” says Hill. “The authorities in the Italian capital have granted us permission to take bone samples from skeletons in dungeons underneath the Colosseum. That will happen in a few weeks.

“We are also taking powdered bone samples from known Barbary-lion skeletons in museums in Italy, France, and Belgium, and subjecting them to DNA testing at Oxford University. Then we’ll take hair samples from Saffi and her parents, and see whether we get genetic matches,” Hill says.

“We’re looking for the closest possible DNA match. We hope Saffi will provide the start point for selectively breeding the Barbary lion back into existence,” she adds.

Panthera leo leo, as the breed is known formally in Latin, is famous in legend and history.

In Aesop’s fables, it would have been a Barbary lion that spared Androcles in the arena, out of gratitude to the Greek slave who earlier removed a thorn from his paw.

Julius Caesar once put 400 of the animals on show. His rival Pompey went one better with 600.

In Ethiopia this century, the Emperor Haile Selassie tethered Barbary lions near his throne.

A Barbary was used as a model for the bronze lions seen today in London’s Trafalgar Square.

Most recently, the menacing Scar in Disney’s “Lion King” was patterned on a Barbary. Hill has “serious doubts,” however, about whether the lion that roars before every MGM movie is a Barbary. “But we’re checking it out,” she says.

Barbaries, also known as Nubian lions, used to prowl widely in North Africa, which was then forested terrain. But by 1700, the last wild Barbary in Libya had been killed by farmers concerned about the threat to livestock.

By 1800, the species was extinct in Egypt. Only in Morocco did it continue to survive in remote areas. Eventually the last known Barbaries became captives in the royal collection in Rabat, the capital.

“Through genetic fingerprinting we hope to identify and selectively breed lions which carry Barbary genes,” says Nobuyuki Yamaguchi, an animal ecologist at Oxford University’s Wildlife Conservation Unit, where the DNA testing will be done. “I think we could reach our goal in a couple of generations.”

If all goes well, says Dr. Yamaguchi, the next step will be to release specially bred lions on a site in Morocco’s Atlas Mountains. Wildlink’s Hill has already made arrangements for that to happen. Two years ago, she persuaded the Moroccan government to set aside some 250,000 acres in the mountain range for Barbary lions to roam.

“We need to plant vegetation and introduce a food source,” says Hill. Arrangements are being made to provide the lions with natural prey, such as red deer.

Morocco is keen to restore the Barbary lion’s lineage.

“It is our ideal to see the Barbary lion back in the wild,” says Brahim Haddane,curator of Morocco’s Rabat Zoo, which houses the king’s collection of about two-dozen animals. “I have been working for this for the last 20 years.”

Two decades ago, a team of German scientists also tried to breed Barbaries, but failed.

Hill believes success this time is vital. “If we fail, another part of our untamed past will live only as a symbol, a myth, and a memory,” she says.

Unfortunately the only female lion thought to be an appropriate candidate for breeding has died.  The project has collapsed and there is no hope of reviving the Barbary Lion.