WASHINGTON DC – President Biden signed the Big Cat Public Safety Act into law!  Public contact with big cat cubs must cease immediately and private owners will have 180 days to register their cats with the US Fish & Wildlife Service.  After today they may keep the cats they have but cannot acquire more.  This will rapidly decrease the number of big cats born into lives of deprivation and confinement, and since most private owners already give up their cats when they reach adulthood, by the age of 5, that means that within 5 years there will be very few cats languishing in backyards and basements. 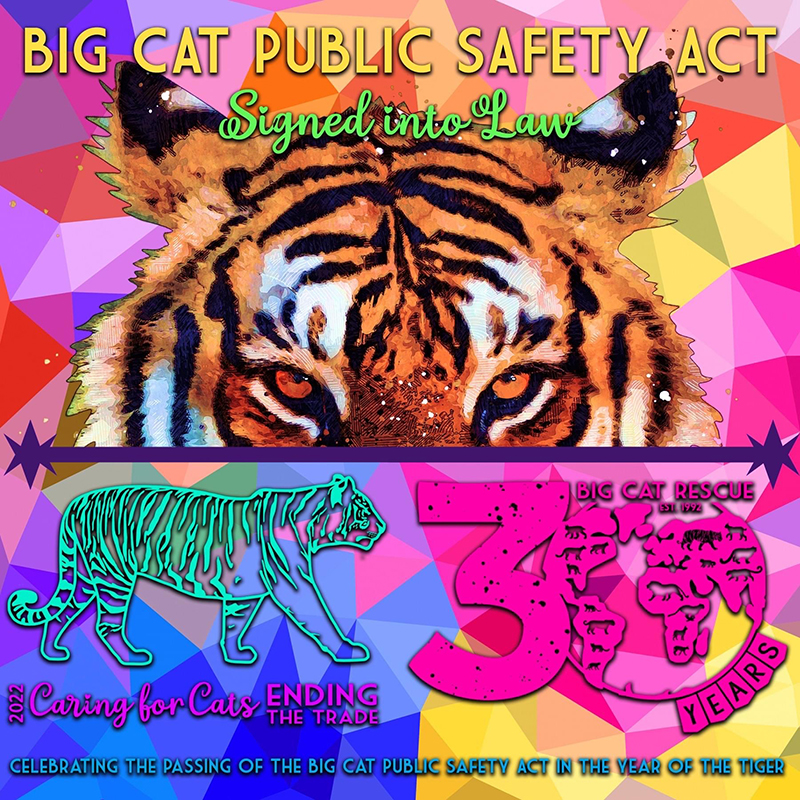 TAMPA, Fla. – December 06, 2022 – After passing the House of Representatives in July by a more than 2/3 bipartisan vote, we are thrilled to announce that today the Big Cat Public Safety Act passed the Senate unanimously. From here it goes to the President for signature. The White House has already expressed support for the bill. This legislation has two key provisions:

First, it puts an end to the abusive use of tiger cubs and other big cat cubs for petting and photo ops. Cubs used for this purpose are ripped from their mothers at or close to birth, as shown in one scene in Tiger King, deprived of the health protections of the mothers’ milk, and often deprived of sleep and physically punished to discourage their natural behaviors. There is no tracking of how many of them die in the process or where they end up when, a few months later, they are too big and dangerous for petting.

Second, the bill phases out private ownership of big cats by unlicensed owners who keep them as “pets” in what are typically miserable conditions in backyards or worse. Current owners of big cats are “grandfathered” and can keep their existing animals. But they must register the existing animals with the US Fish & Wildlife Service and may not breed nor acquire more. Thus, private owners can no longer serve as the dumping ground for cubs who “age out” of petting operations. Within a decade most of the thousands of big cats living this way will have passed away, and in twenty years no cats will be living in this kind of misery. 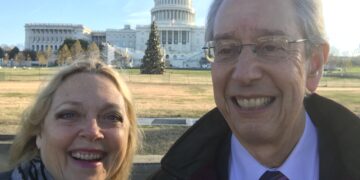 Carole Baskin, CEO and Founder of Big Cat Rescue, reacted to the Senate vote this way: “This bill has been the number one goal of my thirty years of advocacy to stop the mistreatment of big cats. This has been particularly true in the last twenty years during which my husband Howard Baskin joined me and took over managing our legislative efforts. The passage of the bill is the successful culmination of many years of battling against narcissistic, abusive, dangerous men who dominated this cruel trade and did everything they could to stop its passage, including wanting to intimidate, discredit, and even kill me.

As we celebrate this long-sought victory, I feel enormous gratitude for the many people and organizations who joined us in this battle. This included our own staff and volunteers who ran Big Cat Rescue under the leadership of my daughter, Jamie Veronica Murdock, and other sanctuaries, other animal welfare organizations, and many individual animal advocates and donors. It also included, critically, the National Sheriffs’ Association, many other first responders around the country, the bill sponsors in the House and Senate, and all of those legislators who supported the bill. I am also grateful that apparently I am harder to intimidate or kill than some thought.”

About Big Cat Rescue: Located in Tampa, Fla., Big Cat Rescue is one of the most influential sanctuaries in the world dedicated entirely to abused and abandoned big cats. The nonprofit organization is accredited by the Global Federation of Sanctuaries, is certified by Independent Charities of America as a “Best in America Charity,” and has received Charity Navigator’s highest four-star rating for sound non-profit fiscal management for nine consecutive years putting it in the top 4% of rated nonprofits.  The sanctuary is home to more than 40 exotic big cats. For the entire timeline of the work to bring the Big Cat Public Safety Act into law visit:   https://bigcatrescue.org/big-cat-coalition/

News Stories About the Win

Watch this THANK YOU video from all the sanctuaries:  https://youtube.com/shorts/LFcBjCNh4Fs?feature=share

After a long campaign by Carole Baskin, Joe Biden signs a bill to ban the ownership of big cats in the style of “The Tiger King.”

Stalking is the name of the game. Jinx black leopard at Big Cat Rescue

Treats For The Fourth With BIG Cats!

Stalking is the name of the game. Jinx black leopard at Big Cat Rescue