There is NO reason to breed tigers (or any other big cat) for lives of confinement and deprivation.  The only sanctioned international breeding plans for exotic cats are called Species Survival Plans (SSP) and they are ONLY carried out in accredited zoos.

Ron Tilson, director of conservation at the Minnesota Zoo and coordinator of the American Zoo and Aquarium Association’s captive breeding program for tigers says, “For private owners to say, ‘We’re saving tigers,’ is a lie,” Tilson says. “They are not saving tigers; they’re breeding them for profit.”

Tilson says the exotic animal market is a multimillion dollar industry, ranking just below the illegal drug trade and just above the illegal gun market.

Tilson says tigers are the most charismatic animal on earth. Their appeal is universal. “They are the alpha predator who used to kill and eat us,” he says. “We cannot help but be in awe of their power and grace. Tigers represent everything fine and decent and powerful. Everything those people would like to be. It’s all an ego trip—big guns, big trucks, and big tigers.”

Does Captive Breeding Save Animals From Extinction?

None of the captive breeding of exotic cats is doing anything to save them in the wild. The wild cats in private hands mostly came as zoo surplus and were sold out the back door with no records or pedigrees. Read Alan Green’s book, Animal Underworld to see some of the major zoos who were caught doing this. It still happens today.

Those animals were then bred indiscriminately, and many purposely inbred for traits such as white coats, tiny size, and docile (read retarded) temperament. None of the exotic cats in wild hands can be traced back to the wild, other than local cats, cougars and bobcats, who may have been snatched from the wild in the U.S. For that reason they can never be bred for introduction back to the wild.

First, no such programs exist and even if by some act of God all human settlements were wiped out of some vast area and it became suitable for wildlife again, these captive bred cats could never survive. The reason is that their instincts are geographical and a perfect example was an attempt at repopulating the now extinct TX ocelot.

The AZA (American Zoological Association) zoos got together and took captive bred ocelots and released them in TX. The problem was that none of the cats in zoos had come from TX originally because the ocelots in TX had been extinct for a long time. Instead, they had all come from cats who were taken from the wilds of Central America long ago. In Central America ocelots eat snakes because most of them are non venomous. When the zoo bred ocelots were turned loose in TX they reverted to their ancient instincts in search of food and sought out snakes, but the TX snakes were mostly rattlesnakes and the ocelot program died out in a matter of weeks.

There are other reasons, in the real world, why it doesn’t work, which includes the fact that human – big cat conflict is one of the main reasons cats are wiped out of areas. Captive breeding not only selectively chooses animals that are least fit for the wild but also conditions the cats to not fear humans. That increases the conflict and the result is that not only would the offending cat be killed, but likely any wild cat seen in the area would be hunted down and killed in a case of mistaken identity. That escalates the extinction of cats in the wild.

Last, but maybe most important is, if you can pay to see wild cats on your terms (ie: cheaply, in a cage, or being forced to let you touch them and have your photo with them or their young) then you aren’t learning anything about who these animals really are. You aren’t learning about how they fit into a complex environment when they are housed in a situation that does not duplicate all of the web of life that they are a part of in the wild. All wild cats roam territories that are calculated in miles, not square feet. To know anything about them, you have to see who they are in their real environment.

Conservation is a very complex issue and captive settings cannot duplicate it, so the important work of saving entire eco systems is not taught and not done in a captive setting. What’s worse is that lip service is paid to these worthy objectives and when you pay to see captive wildlife you walk away thinking you did something good when in fact you contributed to the problem. You paid to see a cat in a cage. You made sure that industry continues to breed and exploit more cats. You did not pay to save the wild and all of the wonderous and magnifient creatures who call it home. You put another nail in the coffin for the planet. 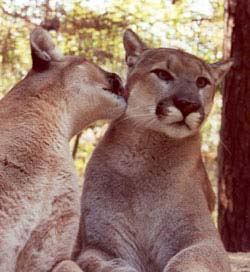 This is the most frequent email we get from exotic cat owners: “Hey, I’m really in over my head here!  I got this thing as an infant. I bottle-raised it. Everything was great. But I can no longer handle this cat. I cannot housebreak it. It tries to attack people. I just don’t know what to do with it.'” This was an actual quote about a Serval, but we have had hundreds of similar letters about every kind of exotic cat.

We do not breed, sell nor trade cats. We have neutered all of our male cats or house them separately to ensure no accidents.  We have successfully managed more than 100 exotic cats with no accidents for a decade or more.  The horrible sounds you hear playing is the sound of a cougar in heat and they stay in heat year round.

Below are some zoos and pseudo sanctuaries in Florida.  These places breed and sell while lying to the public and saying they are doing it for conservation.  The file is large, so you may have to wait a bit for it to load fully and then hit play again. These are the ones that are open to the public. Many are much worse, but do not allow the public in to film.

Lots of places claim to be breeding cats to save them from extinction when in fact they are not involved in any real conservation effort and rather are justifying their breeding to have babies who will bring in paying visitors and worse yet to sell.  Many people contact us each week saying they want to start a captive breeding program to save the cats from extinction, but the only viable programs currently being operated in such a manner as to accommodate this goal are being run by accredited zoos who will not work with the private sector.  Unless you can trace your cat’s pedigree all the way back to the wild and you have been accepted into the Species Survival Plan for that specific breed, you will not be aiding conservation, but rather will be contributing to the over abundance of unwanted animals.

All of the cats in the above video are hand raised “pets” doing what comes natural as they mature.  You may have to click twice to start the video.

Please do not ask us to sell you a kitten, nor to refer you to a broker, dealer or breeder.  These animals do not make good pets and if you have the experience and expertise to care for one for the rest of it’s life, then you should be donating your time to caring for the hundreds of unwanted ones who have ended up in real sanctuaries.  Real sanctuaries do not breed.

We receive requests every week from people who are looking for some place to take their “pet” cat.  Each year we have to turn away more than 100 such “pets“.  These unwitting owners have discovered that all exotic cats, both male and female,

neutered or not, spray and bite when they reach sexual maturity.  (They don’t just spray a little either.  We are talking about buckets of the foulest smelling urine, all over your house, your things and you. If you don’t believe me, watch this clip of a neutered lion HERE)  Moving them out to the yard means your neighbors will soon be complaining that your place smells like a zoo.   By the time they find us they have discovered that the zoos do not want their animals, that no one is willing to buy them and that they can’t even give them away.  Refuges are usually full to capacity and cannot take in another hungry mouth to feed.  All too often, these “pets” are turned out to fend for themselves, where they surely die of starvation or are euthanized.

There is no reason to try and make a pet of any wild animal.  Both of you will suffer.

6 responses to “Breeding and Selling”