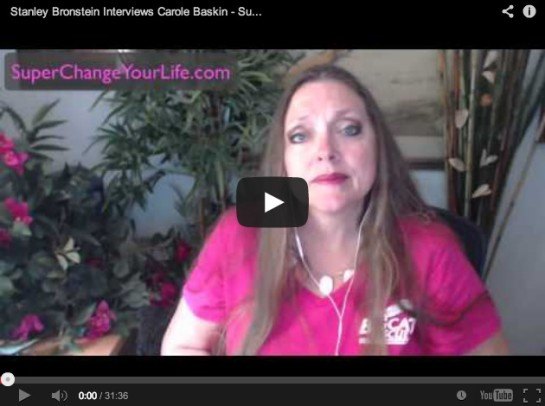 Stanley F. Bronstein is an Attorney, CPA, Author & Certified Laws of Positioning® Coach. He interviewed Carole Baskin for a segment that he calls Interviews That Will Change Your Life. Be sure to check out hundreds of other inspiring stories at: http://superchangeyourlife.com/interviews/

Join Big Cat Rescue’s Carole Baskin and her cat experts from around the globe.

Carole Baskin left home at the age of 15 as a high school drop out.  She was bored out of her mind in school and wanted to go to work to help her family which was struggling financially, but her parents wanted her to stay in school.  She left home so that she would not continue to be a financial burden and spent many nights sleeping under cars, eating out of dumpsters and living on the street until she was able to earn enough money to put a roof over her head.  She couldn’t tell her employers her age and couldn’t provide a social security number, so she changed jobs frequently, but worked ridiculously long hours to try and get ahead.

There was something chasing her that insisted she had to be financially secure and she didn’t know why, but she knew she would need to have a business that would support that calling.  In 1980 she gave birth to her daughter and only child and began a career in real estate investment using other people’s money.  Her real estate business grew rapidly to a multi million dollar business that gave her the freedom to do the work that she discovered to be her calling; ending the abuse and trade in big cats.

Carole Baskin is the founder and CEO of Big Cat Rescue. She runs a real estate business and manages 100+ volunteers and interns from around the world and 14 staff. She has run this Tampa based non profit since 1992 and has garnered international attention to the plight of captive big cats on CNN, Animal Planet, Discovery, U.S. News & World Report, People Magazine, The Today Show, Sports Illustrated, all of the local media outlets and many more national and international programs. She is the host of the Cat Chat Show, a weekly, live interview with cat experts from around the world.

She has lectured in Costa Rica, Panama and many cities across the U.S. on cage construction, legislative affairs, and sanctuary standards in Universities, Law Colleges, and in numerous animal association conferences. Her efforts, combined with many others of like mind, have resulted in the 2003 passage of the Captive Wild Animal Safety Act which made it illegal to sell a big cat across state lines as a pet, the 2009 requirement that those in Florida who possess Class I animals must post a $10,000 bond and the reclassification of a cougar to Class I, making it illegal to own as a pet in FL.

The coalition formed in 2011 and decided on a three prong approach to ending the abuse of tigers including; Closing the generic tiger loophole at the USFWS, Asking USDA to close the 4 week window of cub petting and a federal bill that ends the breeding and trade in big cats outside of AZA zoos. By 2013 the USFWS and the USDA had put the group’s suggestions on the Federal Register for public comment and had received nearly 30,000 comments in support. The Big Cats and Public Safety Protection Act, a federal bill to stop public handling of big cats and their cubs and ending the private possession of big cats had 5 Senate cosponsors and 92 cosponsors in the House and is poised for passage.