FOR FLEAS WE RECOMMEND AND USE ADVANTAGE BY BAYER.  IT IS AVAILABLE FROM YOUR VET AND IS THE SAFEST AND MOST EFFECTIVE REMEDY WE HAVE FOUND

CAT OWNERS BEWARE: FLEA PRODUCTS LABELED FOR USE ONLY ON DOGS CAN BE FATAL TO CATS 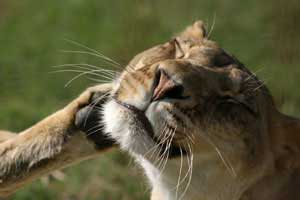 Rockville, MD – “Severe illness and fatalities can occur in cats when their owners apply flea products intended for use on dogs only,” said E. Kathryn Meyer, VMD, coordinator of the U.S. Pharmacopeia (USP) Veterinary
Practitioners’ Reporting (VPR) Program. The VPR Program identifies product quality problems, medication mishaps, and adverse reactions with drugs, pesticides, chemicals, and biologics used in veterinary medicine. Most recently, USP’s VPR Program published a report on this important issue for pet owners in the July 15 issue of the Journal of the American Veterinary Medical Association (JAVMA).

Given that fleas are a warm weather problem, this is a timely warning for America’s 28 million cat owners. They need to know that, although many flea products are packaged very similarly, the active ingredients can vary greatly.  For example, “spot-on” flea and tick products are popular alternatives to the traditional flea sprays, dips, powders, and shampoos. A small amount of liquid is applied directly to the animal’s skin, often behind the neck or along the spine, usually on a once-a-month basis. Although some “spot-on” products have been approved for use in both dogs and cats, products containing concentrated permethrin (45% to 65%) are approved for use in dogs only and can be highly toxic to cats. In contrast, flea sprays intended for cats contain lower concentrations of permethrin (e.g., 2%) and are generally well tolerated.

“It is critical for owners to be aware of the severe consequences of using flea products incorrectly—particularly when cats are involved—because cats can be very sensitive to certain chemicals,” continued Dr. Meyer.  “Cat owners should read labels carefully before purchasing any flea or tick products. The products are considered safe when used properly; however, if owners do not follow the directions, severe harm to their pets can occur. For example, if a product label states that it should be used only for dogs, the product should never be used on cats, even in small amounts. Furthermore, people who own both dogs and cats should be aware that “dog-only” flea products applied to their dogs can cause illness in cats that are in close contact with the treated dogs.”

As documented in the July 15 issue of the JAVMA, the USP VPR Program received 11 reports between August 1997 and September 1998, involving 12 cats
that required hospitalization following exposure to a concentrated permethrin “spot-on” flea product. Despite hospitalization, four of the cats did not survive. Additionally, secondary exposure to permethrin can occur when cats are in close, physical contact with dogs treated with the chemical. The VPR Program received one report involving a cat that became ill simply through contact with two household dogs treated with a “spot-on” permethrin product.

In addition to reports received by USP, the JAVMA article reviewed cases reported to the Environmental Protection Agency (EPA). The EPA received reports involving 125 cats that became ill or died following incorrect direct application of permethrin and 24 cats that were sickened or died due to contact with permethrin-treated dogs in their households.

Concentrated permethrin “spot-on” products for dogs are available under a variety of different brand names in retail establishments (e.g., grocery stores, pet stores, department stores, hardware stores, etc.) and through mail-order pet supply catalogs. All products include a label warning that they are for use on dogs only, and should not be used on cats. Some labels even suggest separating household cats from treated dogs; however, the length of time the animals should be separated is not specified.

Unfortunately, in several cases reported through the VPR Program, the owners admitted that they saw the warning against use in cats, but thought a “small amount” would not be harmful. It is essential for pet owners to know that even a few drops can result in severe illness or death to one’s cat.

“Labeling changes designed to educate consumers may help reduce the incorrect use of permethrin products by pet owners,” said Dr. Meyer.  “These changes could include stronger warnings against the use on cats—with a description of the potentially fatal consequences of exposure—and explicit directions on how to prevent secondary exposure to cats when the product is used on dogs.”

Signs of permethrin toxicity in cats often include excitability, twitching, and seizures. Quickly bathing the cat in a mild dishwashing detergent and seeking veterinary care will maximize the cat’s chance of survival. Prevention, however, is a far simpler task. Pet owners should carefully read and heed all label information on pesticides before purchasing and applying to pets.

The following few simple tips can help keep cats healthy while treating them for fleas:

USP was established in 1820 to ensure that consumers receive medicines of the highest possible quality, strength and purity in the United States. Today’s
Pharmacopeia provides standards for more than 3,700 drugs and dosage forms for medicines and dietary supplements. USP’s standards-setting role has also grown
to include development of authoritative information on the use of medicines and dietary supplements as well as reporting programs regarding product problems and medication errors, in both the human and veterinary fields, which seek to reduce such occurrences and benefit consumers nation wide.

Florida not tickled by threat of infestation

The persistence of disease-carrying parasites in their state is concerning some Floridians. The parasitology unit of the National Veterinary Services Laboratories, the USDA, and researchers at the University of Florida recently initiated a roundup of ticks, prompted by new fears that cowdriosis (also known as heartwater disease) could spread from its foreign environment to the United States.

tick-borne, septicemic, rickettsial disease caused by Cowdria ruminantium.  It can cause severe disease in cattle, sheep, goats, deer, and water buffalo.  Largely native to sub-Saharan Africa and Madagascar, it also occurs in animals on some islands in the Indian Ocean and the Caribbean, and occasionally in Europe. Exotic breeds are highly susceptible to cowdriosis, making it one of the more threatening animal diseases in Africa.

Cowdriosis was in the news in May 1999 when Amblyomma sparsum (commonly known as large reptile ticks) were discovered in Florida on imported
tortoises. The vector

ticks can carry the rickettsial agent that causes disease.

The ticks removed from the tortoises were sent to be identified at a University of Florida laboratory in Zimbabwe, Africa, and some were discovered to carry C ruminantium. Fortunately, there have been no reports of the ticks transmitting the disease to any livestock or other ruminants in Florida.

An outbreak of cowdriosis in the United States would be disastrous to the beef and cattle industries. Mortality in susceptible species could be from 40
percent to approaching 100 percent. The disease can kill ruminants within two to three weeks of infection. There is no practical vaccine and no officially
recognized treatment once the clinical disease is evident.

One factor that has increased the threat of cowdriosis is the growing popularity of imported reptiles as pets in the United States. More than 2.5 million reptiles were imported in 1995, according to the US Fish and Wildlife Service. More reptiles mean more ticks;

Florida issued an emergency state rule in December banning the importation of any African spurred tortoises or leopard tortoises. Outstanding orders for
shipment of this species have been canceled.

Prevention of the disease relies on control of its

tick vectors. The USDA and NVSL are collecting ticks for further identification, research, and control. Any ticks – particularly those suspected to be exotic, collected from exotic animals, or collected from recently imported animals – should be sent to the USDA National Veterinary Services Laboratories, PO Box 844, Ames, IA 50010. The parasitology unit of the NVSL is the headquarters for the National Tick Surveillance Program and the USDA reference center for identifying animal ectoparasites.

Also ongoing is the Heartwater Research Project at the College of Veterinary Medicine at the University of Florida, funded through a grant from the US Agency for International Development, with laboratories in Zimbabwe. The project, designed to develop improved methods for the control and diagnosis of cowdriosis, was initiated in 1985 and is now in the fourth phase of development. Researchers involved with the project have completed development of a seriodiagnostic test.  Primary objectives in this project include completing development of an inactivated vaccine and developing recombinant vaccines for the disease.

If researchers can eradicate the exotic rickettsia-transmitting ticks from our shores, part of the battle will be won. But another threat looms from within
the United States.

Dr. Michael Burridge, professor with the

University of Florida’s Institute of Food and Agricultural Sciences and director of the Heartwater Research Project, warned that another parasite, the Gulf Coast tick, indigenous to the southeastern United States, has shown its capability to transmit the rickettsial agent that causes disease under experimental conditions. It’s a tick that feeds on cattle and deer.

“If heartwater disease got in, we have our own ticks that could efficiently transmit it,” Dr. Burridge said. “The stakes are very high. Our cattle industry would be in great trouble and it’s a disease that’s also deadly to deer.”

When the JAVMA spoke to Dr. Burridge in January, he was preparing to travel

to a congressional agricultural hearing in Florida on invasive species, to be chaired by subcommittee chairman Richard Pombo (R- Cal.). One of the primary topics will be on the exotic tick/disease situation, and Dr. Burridge will be there to answer questions raised by the subcommittee.

Dr. Burridge is a proponent of tougher regulations for imported reptiles.  Unfortunately, tougher laws will not necessarily prevent illegal importation. He underscored the absurdity of the situation by pointing out that not only were the troublesome exotic tortoises being successfully bred in the United States,
obviating the need to import them, but there’s also rumored to be such an abundance of them here that they’re being put out into the

Another problem, he said, is that Florida has an optimal climate for ticks to multiply. “We’ve already found one established breeding population of the African tortoise tick in Florida,” he said, adding that eradicating the ticks already here, is, in itself, an “enormous undertaking.”

As Dr. Burridge sees it, there’s no easy fix for the situation. “A task force of knowledgeable people need to deal with this as a matter of
urgency.”

To date, cowdriosis has not been diagnosed in the United States. Should we be nervous about ticks?

“It’s a very serious problem,” Dr. Burridge said. “We have every reason to believe from our research that recovered deer, like cattle, would become carriers. If the agent causing the disease got in, we’d have to live with it; therefore, it is essential that we take every effort to prevent its introduction.”