No Result
View All Result
Home Laws for Cats

Results from 5 years of input from you and “the industry” 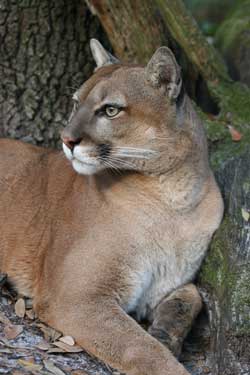 The June 17, 2009 hearing of the Florida Wildlife Conservation Commission set a record for the number of animal lovers to attend and speak up at their meetings.  I have been attending these meetings since 1994 and rarely do more than two or three animal advocates show up but at this meeting I counted more than 40 people who spoke in favor of tougher laws to regulate the trade in exotic animals.  I hope this is the beginning of a trend and if so it will shape the future.  Wild animals will no longer be exploited, abused, neglected and abandoned if the public continues to speak up for them.  You can do so again today at CatLaws.com

Most of the rule changes that were adopted are an improvement and we are happy that there are now some better rules on the books.  These are due to become enforceable in August 2009.  The best news is that Cougars and Cheetahs have been uplisted to Class I which means that they can no longer be kept as pets in Florida.  Those who already own these cats as pets can keep them, but cannot breed or replace them unless they meet the higher requirements for owning Class I animals which includes 5 acres of land, stronger cages and they cannot use them for petting sessions after they reach 45 lbs., so fewer people will be mauled by them.

Our biggest defeat was that the FWC approved a new category of licensee called “Sanctuary” No accredited or legitimate sanctuary asked for this category and 2500+ of the 2764 letters received by the FWC specifically asked that it not be adopted as it creates 4 major loopholes:

1.  The new Sanctuary category allows possession of Class I animals without exhibition.  On the surface this may sound good, but what that does is exempts them from having to comply with USDA standards as USDA only monitors “commercial activities.”

2.  Most cities and counties can only use their zoning laws to prevent people from moving into residential neighborhoods with lions and tigers.  The zoning laws cannot specify that wild animals cannot be kept, according to the FWC who claims to have constitutional authority over all wild animal issues.  The only way zoning can prohibit such activities is to have a zoning designation that does not allow for commercial uses; thus it applies equally to commercial use of wild animals as well as all other commercial uses.  The new “Sanctuary” category is deemed a non commercial use, as long as they do not exhibit, and thus would thwart the cities, counties, municipalities and home owner associations’ prohibitions.

3.  If the “Sanctuary” does not exhibit, then they do not have to post the $10,000 bond imposed by legislators in 2007.  According to the legislators who voted for the $10,000 bond requirement, they believed that the bond would be required of all possessors of Class I wildlife.  At that time there were 5 people who had been grandfathered in as Class I pet owners, but all other possessors of captive wild animals had to be commercial uses such as exhibitors and sellers.  It was assumed that to sell an animal, you have to show it to potential buyers which would technically be exhibiting.  The language of Florida Statute 379.374 however says that “No person, party, firm, or corporation shall exhibit to the public either with or without charge or admission fee, any Class I wildlife…without having first guaranteed financial responsibility, in the sum of $10,000…”  Now if someone wants to have a tiger in their back yard they can call themselves a sanctuary and as long as they don’t get caught showing it off to anyone they don’t have to post the bond.

4.  It enables those who use and abuse big cats to hide their worst acts from USDA and the public.  The FWC allows multiple people to be licensed at a single facility.  The FWC also allows entities to have multiple facilities that are licensed separately.  A violation at one does not affect the other.  A circus could then have a location that is licensed by both FWC and USDA where they keep only a few big cats in decent enough conditions to keep their licenses.  They then open a second location, set it up as a non profit with a different name and dump the animals they aren’t using there.  That dumping ground would not be commercial, thus USDA would not license and inspect it and the public would not be able to get in to see the horrid conditions such as these Florida facilities.

They could continue to breed those animals at the “Sanctuary” because they know that there would be no way for FWC to catch them.  You can’t tell when an exotic cat is pregnant by looking at them, so the FWC would have to be inspecting at the moment of birth to catch them.  They would then use those babies as petting and photo props and perhaps in their acts until they mature and then dump them back into their “Sanctuary.”

Many of these people work together and many of them already have multiple locations, so it is very likely that they would create communal dumping grounds.  When the cost of maintaining the “Sanctuary” dumping ground becomes too high, they just walk away from the cats and leave it to the tax payers to find homes or kill the cats.  (There are 58 big cats in a Palm Bay backyard right now that used to belong to Ray Grennell, AKA Thunderhawk, who takes baby tigers to flea markets.  He’s moved on, and now they have no where to go)  They will have started some other dumping ground under a new name and the cycle continues.  It is well known in the industry that golden tiger cubs are often drowned, clubbed to death or cremated at birth because the white cubs are the money makers.  Is it too hard to believe that the kind of people who do these things to baby tigers might create a “Sanctuary” dumping ground for adult tigers and walk away from them?

FWC staff asked me twice during the hearings to not oppose the Sanctuary category.  I told them the reasons above that I could not support it, but they insisted that no one was going to comply with all of the requirements of qualifying for the “Sanctuary” category just to side step the bond.  I pointed out that they cannot monitor the facilities they already have, and everyone knows it, so there was no way they would catch these new “Sanctuaries” in the act  of buying, breeding, selling or doing photo ops with baby big cats.  We submitted 60 photos of the horrid conditions and people breaking the rules in FL to the Commissioners and you can see more than 200 of these photos here:   http://www.911animalabuse.com/images/FLAbuse/index.htm 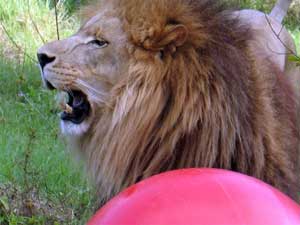 Howard suggested to the FWC’s legal counsel that they substitute

With this: 68A-6.0025 (1) (f) Since a sanctuary may exhibit Class I animals, it is considered a licensed exhibitor whether it does so or not, and must meet the bonding or financial responsibility guaranty requirements of Rule 68A-6.0024(3)(a)-(f) F.A.C.

They refused and I think that speaks volumes about their real intent of this entire “Sanctuary” category.  The FWC did not like the fact that the legislature took matters into their own hands to impose the bond and it appears are trying to create as many ways to circumvent the requirement as possible.  The FWC has already taken the position that breeding and selling lions and tigers does not mean that they are exhibiting the cats and thus 111 of the 248 Class I owners in Florida are not currently posting the bond according to the FWC’s Feb 2009 list. We do not believe that these people are not exhibiting and pointed out to the Commissioner 19 specific facilities that we do know are exhibiting Class I animals without posting the bond, but they ignored us.

The next step will be to go back to the FL legislature and ask that they amend the language of the bond requirement to apply to all who are licensed to possess Class I animals.  The FWC says that a lot of people who are on their list as having a Class I license do not actually possess a Class I animal and that is why they aren’t requiring the bond, but there is no requirement to notify the FWC if they obtain a Class I animal, so the FWC would never know if they had one or not unless it was reported or if they happened to catch the person in possession during an exhibit, but in the past I have gone 5 years without seeing an inspector so that dangerous situation could exist for a very long time.  With a downturn in the economy, inspections are likely to be further and farther between.

A couple of good things that happened at the meeting is that the FWC claims that they post all licensees locations online now on a map so people can see if there are dangerous wild animals in their neighborhood.  I have searched their site and cannot find it, but have sent an inquiry asking for the page URL.  The Tampa Tribune posted Class I owners by zip code HERE

The other is that Col. Jones said that the FWC notifies the County Attorney whenever a person applies for a Class I license.  Since so many people have sent letters and showed up to complain at the meeting, Commissioners Ron Bergeron and Rod Barreto suggested that the staff come up with a way to require all new applicants to submit a list of all of their neighbors within 500 feet and proof of having notified them of the intent to bring in wild animals.  He also suggested that this list be updated and notification to the neighbors be updated annually as people move and their contact numbers change.  This is a very good idea.  We will be watching to see if this moves forward or gets killed.

The map below is the FWC’s list of Class 1 and Class 2 wildlife owners http://ocean.floridamarine.org/DLE/ 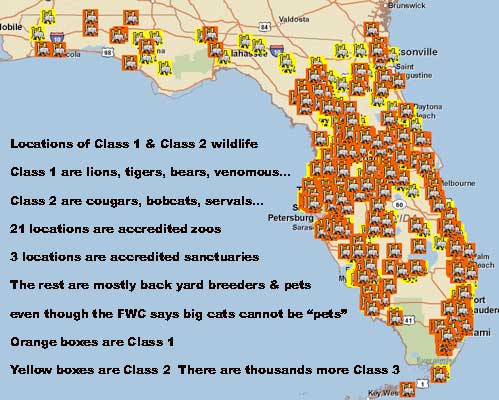