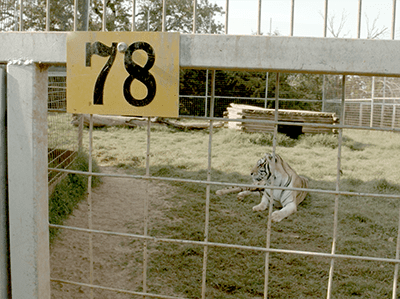 On June 1, 2020, in Big Cat Rescue’s nine year lawsuit against Joe Exotic and more recently against entities controlled by Jeff Lowe,  a Federal Court granted ownership of the former GW Zoo property to an Oklahoma LLC controlled by Big Cat Rescue’s Howard Baskin. The property will be held in that entity until it can be sold and the proceeds used to benefit big cats. The Court gave Lowe 120 days to vacate the property, including removing the animals. At a hearing in early August attended by Lowe and his attorney they indicated they would be out by then, if not before then.

We felt based on Lowe’s history that we could not count on anything Lowe said and had to be prepared in case there were still animals there. While having to care for and relocate animals would be a significant challenge, the upside of finding that there were animals there is we could send those animals to a sanctuary instead of condemning them to the kind of poor life we believe they would lead under Lowe’s care. 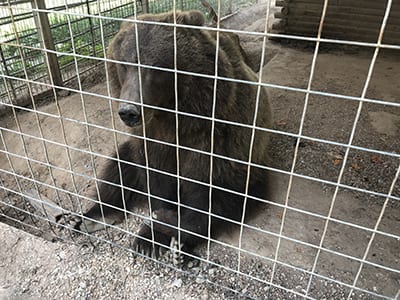 In June and July Lowe received numerous citations from USDA for serious violations including failure to provide veterinary care, inadequate housing, improper handling of animals and unsanitary conditions.  In August USDA suspended his exhibitor’s license and he surrendered it. USDA has filed to permanently revoke his license and prevent him and his wife Lauren from ever getting another exhibitor’s license.  Unfortunately, under current law this does not prevent him from continuing to own the animals. And now that he has no license to exhibit, he is not subject to regular USDA inspections.  That is a major reason that we need to pass the Big Cat Public Safety Act, which would phase out ownership by unlicensed individuals like Lowe.

With no way to know if we would be left with animals to care for, but with strong suspicions that we would end up with some, we had to plan for that contingency to avoid an emergency.  The head of our rescue team arrived in the area the Sunday before the Friday vacate day.  He had already been in communication with two sanctuaries whose people were standing by. One sanctuary was only a few hours away and prepared on short notice to bring food and keepers to feed the cats.  The other sanctuary was represented by Pat Craig, Founder of the enormous Wild Animal Refuge in southern Colorado. Pat was prepared to provide a home for any animals left on the property. 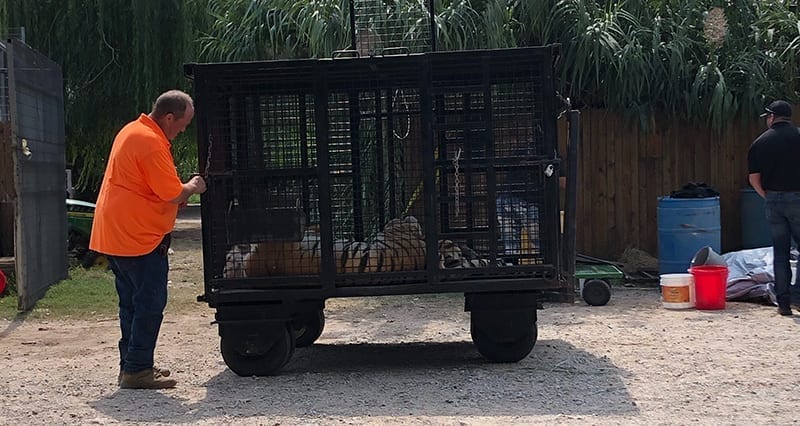 In the weeks before the deadline I spoke via Zoom with Garvin County Sheriff Jim Mullett who graciously made time to speak with me and offer his support to insure a peaceful transition of control of the property. During the week leading up to the day Lowe was supposed to vacate, our team leader met with and finalized plans with the Sheriff. The Sheriff has been wonderful throughout this entire episode. But it turned out to be a more active week for the Sheriff’s staff than he or we expected. 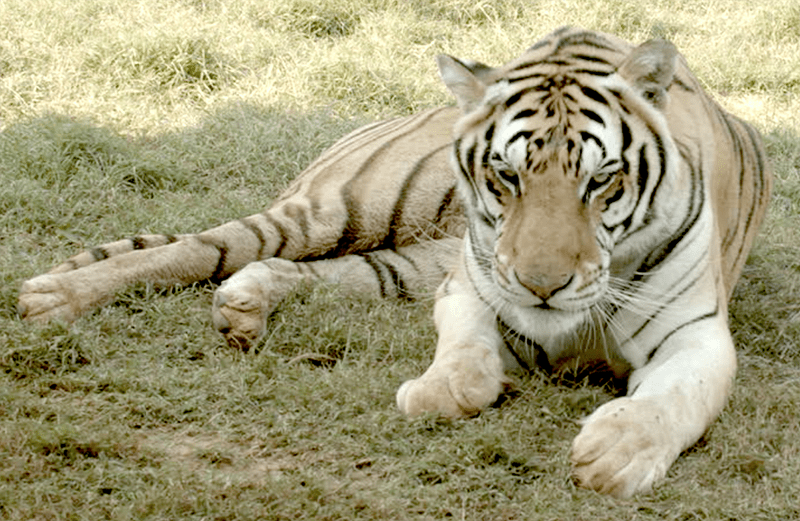 During the week Lowe’s attorney assured us he would be out, with all the animals, by midnight Thursday Oct 1. When they had not finished removing animals by Thursday evening, he called asking for more time.  To avoid a possible physical confrontation with  Lowe’s people continuing to occupy the property and avoid them seeking court action for an extension which could cause much more delay, we agreed to give them an extra day, Friday.

During the week there were rumors that, in the course of moving the animals, Lowe’s team had used excessive tranquilizer on a tiger or a hybrid (e.g. a liger) and the cat had died.  Another rumor was that one worker had been injured with a broken leg or foot. We have been unable to confirm those rumors. However, what we do know is that Friday morning about a dozen squad cars converged on the zoo because, in what we view as a vivid example of the incompetence of the Lowe’s and their workers, during the loading a lion escaped.

I was not there but here is what was reported to us: A relatively young but adult lion, likely scared at having never been out of a cage, got loose and laid down in a field. Normally the next step would be to immediately attempt to tranquilize the animal. However, despite having had months to prepare, Lowe did not have the tranquilizing medications. This is yet another example of what we view as his incompetence. So, members of our team drove to a local vet who very helpfully provided the medications. From what we understand, the deputies were wonderful in preparing for the worst but exercising the appropriate restraint and monitoring the lion while the drugs were obtained. Having to experience what the officers in Zanesville, Ohio did 9 years ago, when they had to kill dozens of loose big cats, would have been a tragedy for both the lion and for the officers. Fortunately, the lion did not make any threatening moves and was eventually tranquilized and loaded safely.

It is not clear if this is the same lioness who, according to the July USDA inspection report, managed to get out of its enclosure by getting on top of the cage kick-in (the angled cage panel at the top of the cage). According to the USDA report, from there she could have jumped over the four-foot panel at the end of the kick-in and escaped, endangering the public. The park was open to visitors at the time.

When our team arrived on Saturday, Lowe was still loading animals. The Sheriff advised Lowe that he could finish loading that truck and then had to leave and not come back.  This left us with three tigers, a grizzly bear, a black bear, eleven wolves and some pigs still on the property. The pigs were given to a neighbor. Sunday the tigers and bears were relocated to the Wild Animal Refuge. Tuesday the wolves were relocated there. Pat Craig emailed that they had arrived safely and said, “all will end up in 35 to 75-acre habitats at the Refuge as soon as their quarantine and rehabilitation is complete.  We are grateful for the opportunity to give some of the GW animals a home – in addition to the recent 3 lions they had from Stark’s place – and the 39 tigers (and 3 black bears) we took from Joe Exotic in December of 2017.” We are very grateful to Pat for being there in anticipation of a need and then providing a sanctuary home for them.

Now the plan is to clean up the mess left by Lowe, rip out the cages, demolish Joe’s house, and sell the property with covenants that prevent it from ever again housing exotic animals or being used as any kind of tourist attraction that is based on its prior use as GW Zoo or on Joe Exotic. Over time the suffering endured on that property by hundreds and hundreds of tiny cubs torn from their mothers at birth and hundreds of adult animals deprived of an existence we would view as humane will fade into history. When it passes, the Big Cat Public Safety Act will stop the cub petting and private ownership that is responsible for so much of the mistreatment and misery. It will prevent future operations like GW Zoo from existing. 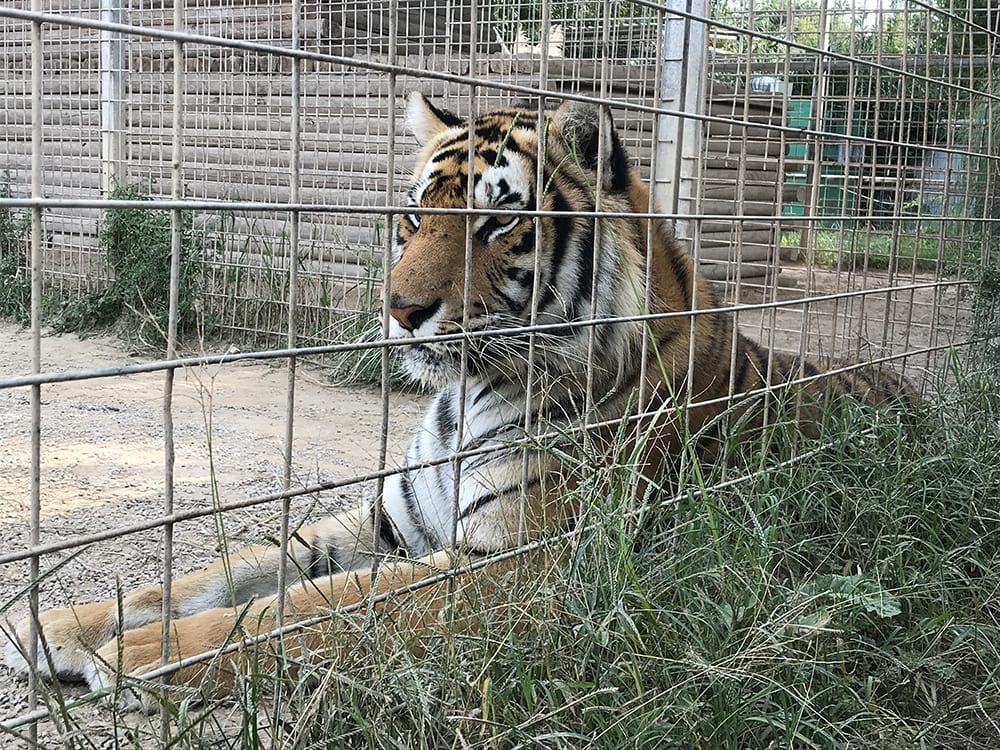 Meantime, we fear the suffering of most of Joe Exotic’s animals may continue at the still incomplete Thackerville, OK property to which Lowe moved them. As far as we can tell, the facility does not have a food preparation building or freezer. At GW Zoo, Lowe brought in food in a refrigerated truck. But one of the citations by USDA was based on the refrigeration not working. According to the report, the temperature was 85 degrees and there were open boxes of decaying liver in the truck.  The report noted that “meat that is rotten is not palatable and does not contain adequate nutrition for the carnivores at the facility.”

Finally, in a classic example of what we view as Lowe’s total lack of character, although he did not manage to find the time to move the animals on time, he and/or his staff found the time to cover the walls at the zoo with nasty, in some cases sexually oriented, graffiti about Carole.  This in our view shows the childish and foul nature of the man our current laws allow to own these animals without any oversight now that he has no USDA license. We need to pass the Big Cat Public Safety Act in part to keep people like this from mistreating these majestic animals. These animals deserve so much better.