0
SHARES
3.3k
VIEWS
Share on FacebookShare on TwitterShare via Email

Illithia was declawed on all four paws before 12 weeks by her breeder in Missouri, and later spayed by her FL owner.  She was surrendered to Big Cat Rescue on 5/25/19.

Exotic cats never work out long term as pets…even if you do everything right.  Two men decided to make their fantasy come true by buying a precious baby serval.  They did everything right from the beginning, including getting a Class II permit from the Florida Wildlife Conservation Commission and permission from their Home Owner’s Association.  They provided proper vet care, micro chipped her and even made sure she was on an all raw meat diet, despite the breeder telling them to never give her raw meat for fear of waking her wild traits.  A raw meat diet isn’t easy to do for a private pet owner, but it’s vital to the health and vitality of the wild cat.

Everything was going pretty well.  They named her Illithia and showered her with toys, treats and tried to cater to her every desire.  As she grew, her desire was to be a wild cat, like nature intended.  She didn’t want to be a couch potato or a bed decoration.  Illithia wanted to be in the big outdoors so she could feel the warm Florida breeze in her fur, and could smell all of the tantalizing scents of unseen mice, lizards and other prey.  The two men taught her to walk on a harness, hoping to give her a safe experience outdoors, but it wasn’t enough. Illithia increasingly wanted to be outside, so the men built a cage in their over sized garage, so she could have the fresh air and see outside.  The problem was that the cute little serval who had originally been such an attraction to neighbors was now starting to look more like a full grown, apex predator. There were so many complaints from neighbors to the Home Owners’ Association that they re wrote their rules, banning exotic cats.  According to Illithia’s owner, the threats from the HOA were intensifying and the FWC said they didn’t want to be involved in a legal battle with the HOA.  It’s always been our experience that the FWC would try to ban counties and cities from being able to determine their own rules about private ownership of dangerous wild animals, so this was different. At three years old we suspect Illithia just wasn’t fun any more either though, which may have contributed to the owners’ decision that they would find a permanent sanctuary for Illithia, and not seek to renew their permits or take on the lengthy and expensive court battle with the HOA that could result in a lien against their home. When exotic cats mature they spray copious amounts of urine all over everything to mark it as theirs.  This is the age they would be breaking away from their mothers, and would kill her for the territory.  It’s the same with their human “parents.”  Someone has to go.

No matter how hard someone might try to make a pet of a wild cat, it just never turns out like they dreamed.  Not even close. When they called Big Cat Rescue we said we’d be happy to have her live with us the rest of her days, as long as they never participated in the trade in exotic cats again.  They agreed.

Will you help support Illithia so we can ensure she continues to be the spoiled princess she’s always been?  Go to BigCatRescue.org/donate

Upon arrival Illithia weighs 25 lbs.  She lives in an enclosure that is approximately 2400 square feet and is next to Beacher Savannah Cat, Hutch Serval and Diablo Savannah Cat.

Illithia the serval, BCR’s newest rescue, received her first special enrichment from the amazing Wednesday night enrichment team! She got an adorable flower garden with butterflies made out of paper and cardboard lightly sprayed with scents. She was hissy and skeptical at first… but then stuck her whole face inside the box and then laid near it for the afternoon 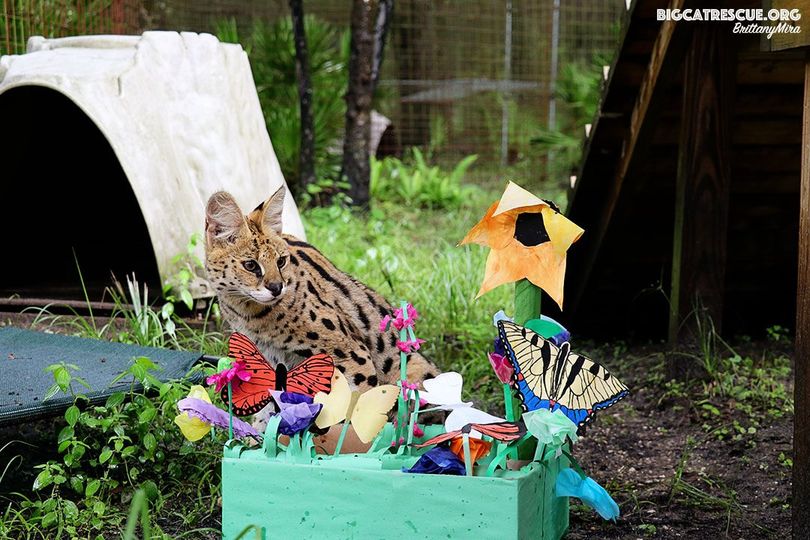 Illithia Serval is the first of the servals to move to Outback where she will have a view of Tiger Lake, many birds, ducks to watch and have her very own pool to play in as well as huge enclosure! 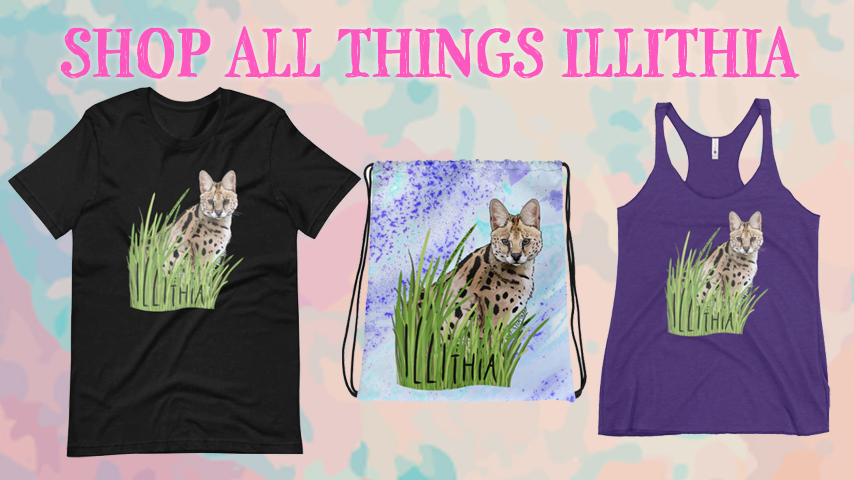