0
SHARES
5.6k
VIEWS
Share on FacebookShare on TwitterShare via Email

This is a link to a LIVE Verkada camera on one of Max Tiger’s platforms.

Jasmine makes some of the most unique sounds, some of which sound similar to Chewbacca. She really enjoys showers with the hose and has even been known to repay the favor by spraying the keepers! She does great with operant conditioning and is incredibly smart! Jasmine Tigress came to us amidst a four-year-long legal battle. She was seized by the Ohio Department of Agriculture and temporarily housed at Big Cat Rescue along with Sapphire the White Tigress, Dutchess Tigress, and Jinx the Black Leopard for the duration of court proceedings. Little did we know, that would take nearly four very long years! Jasmine LOVES Pumpkins!

Jasmine also enjoys lounging on top of her big den so she can keep a close eye on her keepers and neighbors.

We are excited to introduce our four newest permanent residents to you! Jasmine Tigress, Sapphire the White Tigress, Dutchess Tigress, and Jinx the Black Leopard have officially been signed over to Big Cat Rescue following a four year long legal battle between the Ohio Agricultural Department, the state of Ohio, and their former owner from Tiger Ridge Exotics, Kenny Hetrick. We have very little history or information on these beautiful cats, including birth dates. What we can tell you is that they have spent the last few years happy, healthy, loved, and deservingly respected! Their futures are as bright as they can be given that they will remain in captivity. With your support, we know that these four, like ALL of our other cats, will have all of the love and support they could possibly want or need! Thank you for your ongoing support of our cats and our sanctuary. It is only because of the donations we receive from donors like you that we can continue to rescue and care for big cats.

In October of 2011, the Zanesville Massacre occurred. This was a historical event that changed the lives of many animals, people, and laws in the state of Ohio. Terry Thompson, a private owner of dozens of big cats and other wild animals, opened their cages and set them free amongst the town and ultimately to their deaths. He then followed suit and committed suicide by a self-inflicted gunshot wound.

Terry Thompson put authorities in a position they should never have been in. They were forced to shoot and kill 38 big cats and 10 other wild animals. Amongst those lives lost were 18 Tigers, 17 Lions, and 3 Cougars. As a result of this tragic massacre, Ohio took the initiative and passed a state-wide ban on the private possession of big cats in June of 2012.

Like all such bans, those who already owned big cats would be grandfathered in so long as they followed protocol. They would be required to register their cats with the state by filling out a form that stated how many cats they owned and what species they were. They ban also stated that those who owned these big cats were to never purchase another exotic cat or breed the ones that they already had. This ban came with a grace period of two years to follow through and get their animals registered. Most people had complied with the ban, and many of those who did not, quickly did so once the Ohio Department of Agriculture began enforcing it.

In October of 2014, two years after the ban was put in place, Hetrick was served a notice from the Ohio Department of Agriculture giving him 10 days to surrender his animals or he would face criminal charges. On multiple occasions, Hetrick made it known that he would rather euthanize the animals instead of making the state required upgrades in enclosures and care for his animals or have the animals taken from him.

In January of 2015, the Ohio Department of Agriculture (ODA) seized 11 wild animals from Kenny Hetrick. Those animals included 10 big cats (1 Lion, 6 Tigers, 1 Black Leopard, 1 Liger, and 1 Cougar) and 1 Kodiak Bear. These animals were initially housed at the states temporary holding facility in Reynoldsburg.

There were 4 different vets that had visited Tiger Ridge on behalf of Leo the Lion’s declining health. The documentation from an inspector of the U.S. Department of Agriculture (USDA) goes as far back as August of 2014 (a year previous) of Leo being weak in the back end and having difficulties walking and all four came to the same conclusion; Leo needed to be euthanized. Hetrick decided that he knew better and let Leo continue to suffer.

Sadly, Leo the Lion never knew peace outside of Tiger Ridge. He was euthanized in the states temporary holding facility after experiencing complications due to his chronic hip issues. Their medical staff observed prolonged lateral recumbency, loss of appetite, increased rate of breathing, and a decreased ability to move. The only humane choice to make was to end his suffering and assist him in crossing over the Rainbow Bridge.

A few months later, the Ohio Department of Agriculture won temporary custody of the remaining animals until permanent custody could be decided upon. Those animals were split up and sent to three different facilities, including Big Cat Rescue, whose import papers were signed 8/25/2015, to be cared for properly awaiting the end result.  Of all three facilities who were providing care for these animals, Big Cat Rescue is the only one who is doing so without requirement of a boarding fee or any other ODA fees.

When we agreed to take these cats in, provide for them, and protect them during the litigations, there were several things we had to agree to. The most important was that we could not share photos, videos, or any information with the public. With that in mind, we changed their names upon arrival. The names that we provided them with will continue to remain the same going forward. New identities and new lives only make sense coming from their backgrounds.

Kenny Hetrick vowed to fight the state of Ohio on this ban and win back custody of his animals. He took his battle with the state all the way to the Ohio Supreme Court, which maintained in 2018 that the ODA had acted appropriately in seizing the animals. The ODA continued to move forward and filed a lawsuit for permanent possession of the animals. This would be the final step before legally awarding custody to the sanctuaries involved in caring for these beautiful animals, like Big Cat Rescue. Kenny Hetrick did not fight this final lawsuit and his deadline, April 29, 2019, has now come and gone. You can learn more about Kenny Hetrick here: 911animalabuse.com

Finally, on May 1st, 2019, these magnificent cats that we have been caring for these past few years have officially been signed over to Big Cat Rescue! It has been a long journey traveled for all involved, with many restrictions, but we are excited to finally introduce them to you!

Ohio, which was once known as the breeding capital for exotic animals, took a strong stand and these cats were caught on the legal end of things. However, we also received other cats from Ohio due to this ban. Sheena Serval was the first surrender to the state to our knowledge. We also received Teisha Tiger, Zucari Serval, Cyrus Caracal, and Chaos Caracal in a result of this ban going into place.

Too many big cats out there are suffering at the hands of human greed and emotion. Senseless lives were lost in the Zanesville Massacre and the publics eyes were opened. Now it is up to us to teach the public that we are the only ones who can change the endgame for these species. So many are on the brink of either endangerment or extinction and we need to speak up now before it is too late.

Most “roadside” zoos are not accredited by the American Zoological Association (AZA) and are not participants in the Species Survival Plan (SSP). They tell you that they are “breeding for conservation,” but that is a lie. The only reason that they breed big cats is that people will pay to see big cats. Even most AZA zoos only make token donations toward protecting exotic cats in the wild and almost none of the non-accredited zoos send any of the money they make to protecting habitat.

Cats like Jasmine end up falling victim to the trades and once they are too big to handle, become aggressive, and cannot be managed, they end up in terrible places… many live out an unknown fate. No one keeps track of how many big cats are in these private facilities. The USDA did a one-time census in 2004 and discovered that there were around 5,000 tigers in places that either exhibit or breed them, but only 200 of them were AZA zoos and less than a dozen were accredited sanctuaries. Even AZA zoos have been caught selling last year’s babies out the back door to brokers who sell them as pets and props. Sometimes they even end up in canned hunts or sold on the black market for their teeth, claws, bones, hides, and meat.

So many of these cats go completely unaccounted for and all too often they end up in these “roadside” zoos and backyard breeders. It is sad to think about what tortures they endure in places like Tiger Ridge who refuse to live up to code and provide the appropriate care for these cats that did not ask to be born into captivity much less to be abused and/or neglected.

Did you know you can sponsor/adopt Jasmine Tiger for as little as $25.00?

If this interests you go to https://big-cat-rescue.myshopify.com/collections/sponsor-a-cat/products/tiger-sponsorship-download

You can find shirts, tote bags, mugs, necklaces, mousepads and so many more fun items featuring Amanda Tiger in our online gift shops.  Go to reach gift shop linked below and search “Jasmine.”  Your PURRchases of Jasmine Gear helps us provide for all the cats at Big Cat Rescue and work toward ending the abuse and exploitation of big cats. 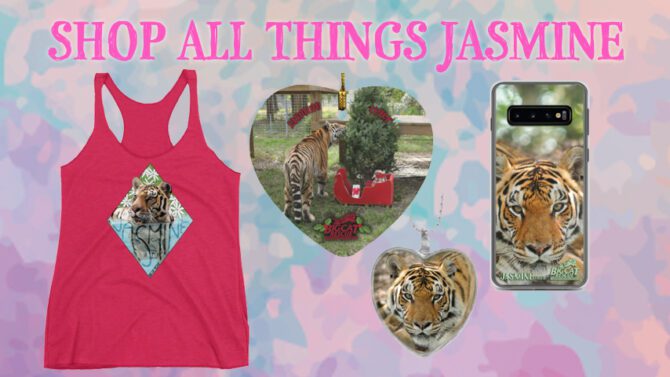 Two Important Things You Can Do to Make a Difference for Tigers Like Jasmine:

You might be interested in learning more about how cub petting impacts tigers, their cubs, and saving tigers in the wild.  Learn all about it at CubTruth.com

After you read CubTruth.com if it leaves you wondering what you can do please go to BigCatAct.com and use the quick easy tool there to let lawmakers know you want The Big Cat Public Safety Act passed into law.

Thank you for speaking up for the cats and being a voice for the voiceless!