0
SHARES
72.7k
VIEWS
Share on FacebookShare on TwitterShare via Email

Where do Ligers Come From?

Irresponsible breeders is the short answer.

A liger is the result of breeding a male lion to a tigress. A tigon is the result of breeding a male tiger to a lioness. Since lions and tigers do not exist in the same areas, this is not something that happens in the wild. It is done in captivity by disreputable carnies to produce a freak that ignorant people will pay to see. These cats suffer from many birth defects and usually die young. Because ligers are usually larger than either parent, it also puts the tigress at great risk in carrying the young and may require C-section deliveries or kill her in the process. When the public quits paying to see these unfortunate creatures, the evil people responsible for breeding them will stop this inhumane practice.

You can stop the abuse. Don’t support places, like T.I.G.E.R.S. and Jungle Island, that breed ligers. Bhagavan Antle who calls himself Doc Antle, the person you will most often see promoting this shameful practice, has gone to great lengths to stop us and the brave young girl who created the video at the bottom of the page, from letting you know the truth. Visit her YouTube site HERE and let her know you appreciate what she is doing to prevent the future breeding of ligers and tigons.

When you see ligers in the news or on TV, write the station and let the reporters know the truth about hybrids. You can send 5 letters at once to the media of your choice through our online email system at CatLaws.com Actually they aren’t this dramatic.  See real photos of ligers below.

Read about the conviction of those involved in canned hunts in the US. They excuse their behavior by making the case that ligers and tigons are not protected by the Endangered Species Act. Now you know why so many of these sleazy back yard breeders are trying to produce more of them.

Video by a Big Cat AdvoCat. Visit her site: http://www.youtube.com/watch?v=wKYILLEdy5s 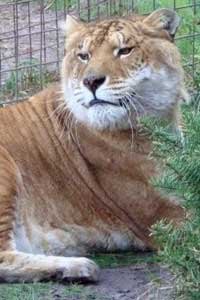 The following story attempts to make it sound like there could be some reason to breed lions and tigers for public amusement, but anyone who cares about animals knows that this is a despicable thing to do because the cats have to spend their lives in deprivation and confinement and are genetically so unhealthy that they usually die young. The ONLY reason anyone breeds ligers is to create a freak that simple minded people will pay to see.

Ligers Make a “Dynamite” Leap Into the Limelight

It’s half lion, half tiger, and completely real. Now thanks to a cameo in the 2004 cult movie Napoleon Dynamite, the liger has leaped into the limelight, prompting fans to ask, What are they really like?

The faintly striped, shaggy-maned creatures are the offspring of male lions and female tigers, which gives them the ability to both roar like lions and chuff like tigers-a supposedly affectionate sound that falls somewhere between a purr and a raspberry.

Weighing in at about a thousand pounds (450 kilograms) each, they typically devour 50 pounds (23 kilograms) of raw meat in a meal.

“For the most part they’re really laid back,” said Jason Hutcherson, vice president of Wild Animal Safari in Pine Mountain , Georgia . “They like to swim and play in the water.”

The drive-through wildlife park is believed to have the country’s largest concentration of ligers, housing ten of the massive cats.

Since 1999 the park has bred its male lion and female tiger many times, producing about 24 cubs.

Not all of them have been healthy, though. 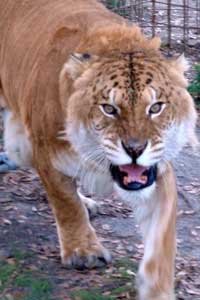 “We’ve had 3 out of 24 that, for all practical purposes, were normal but developed as they grew older some kind of neurological disorder,” Hutcherson said.

Autopsies didn’t reveal what caused the cubs to develop “head shakes,” so park staff “chalked it up to a genetic defect,” Hutcherson said.

Accredited zoos frown on the practice of mixing two different species and have never bred ligers, says Jane Ballentine, a spokesperson for the American Zoo and Aquarium Association, based in Silver Spring , Maryland.

“Keeping the two species separate has always been standard procedure,” she said.

Long before fans heard Napoleon claim that the liger is “pretty much my favorite animal,” there have been rumors of the hybrid’s existence in the wild.

Lion-tiger mating occurs in captivity. But it does not happen in the wild, probably for the same reason humans do not breed with gorillas or chimps.

“Crossing the species line” does not generally occur in the wild, because “it would result in diminished fitness of the offspring,” said Ronald Tilson, director of conservation at the Minnesota Zoo in Apple Valley.

The Gir National Forest in India is the only place in the world where tiger and lion ranges overlap, fueling speculation that wild ligers roamed the area hundreds of years ago.

“This would be highly improbable, because the Gir forest is really very dry and not optimal tiger habitat,” he said.

Perched on the edge of the Mojave Desert near Los Angeles , California , a lone liger, named Patrick, lives at Shambala Preserve, which bills itself as “a haven for endangered exotic big cats.”

“The interesting thing about these animals is that they have the best qualities of the tiger and the best of the lion,” said movie actress and conservationist Tippi Hedren, who has run Shambala since 1972. “Those qualities manifest themselves in the fact that they like to be in the water [a tiger trait] and are very social [a lion trait].”

Many of the cats at the 80-acre (32-hectare) sanctuary are orphans or castoffs from circuses, zoos, and private owners who could no longer care for the animals. Patrick arrived at the sanctuary seven years ago after federal authorities shutdown the roadside zoo in Illinois where he lived.

The 800-pound (360-kilogram) liger was kept in such a small cage that his hind-leg muscles had started to atrophy, said Hedren, who starred in Alfred Hitchcock’s The Birds.

Patrick’s compound at Shambala allows him plenty of room for exercise. A stream runs through his compound, so his tiger half can play in the water or his lion half can stay out of it, whichever he chooses.

Liger in the Hills

“Everyone who comes wants to see Samson,” said Trevor Smith, an environmental biologist and sanctuary board member.

The four-and-a-half-year-old hybrid tips the scales at over a thousand pounds (over 450 kilograms), and eats 30 to 50 pounds (14 to 23 kilograms) of raw meat every other day. 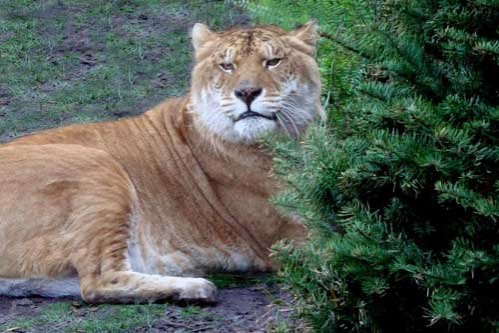 “Samson is really picky. He’ll only eat beef, elk, and venison,” Smith said. “We try and feed him chicken, like the other animals, but he won’t touch it. He’ll let it rot in the sun.”

The sanctuary-whose mission is to educate people about wild animals and emphasize that they don’t make good pets-has seen a surge in visitors since Samson’s arrival in June.

Much of the public’s curiosity about the liger stems from Napoleon Dynamite, Smith said.

Smith worries that Samson is “becoming too much of a freak show.”

If Samson had his way, Smith said, he’d sleep away the day inside, away from public view.

“We’ve had a huge ethical debate at the sanctuary on whether or not we should lock him out of his shed,” Smith said. “But at the same time, he’s why the visitors are coming.”

A tigon is the product of a male tiger and female lion. They receive growth inhibitor genes from both parents and so are smaller than either of them. They show much the same coloration of ligers except they sometimes have more distinct stripes. As with ligers the females are fertile whereas the males are sterile. They have the same vocalizations as liger, a sort of cross between lion and tiger. Ti-tigons speak tiger. Tigons are now rarer than ligers, but in the late 1800’s/early 1900’s tigons were more common.

Meet our past liger friend Freckles

This lion and tiger had been raised together for the bad purpose of creating ligers.  The female was spayed and the male got a vasectomy upon arrival to Big Cat Rescue to ensure there would be no “accidents.”

Ligers in the News

Big Cat Rescue does not condone the breeding of ligers.  These news stories are posted so that you can help us educate people as to why it is cruel to breed ligers and tigons.