Today the vet group was texting back and forth about Mickey’s latest challenge, which was a runny nose and congestion.  Kathryn went to get photos and videos of the coughing, sneezing and mucous, but what her camera captured broke our hearts instantly when we witnessed it.  When Mickey was rescued in 2014, I remember Dr. Wynn doing a routine exam on his joints while he was at her clinic.  He was in such bad shape, and his knees were out of socket, and he had bad teeth, and was starved nearly to death and we wrestled for a long time as to whether the humane thing to do would be to just end his misery back then.

We decided to call in an orthopedic expert, Dr. Hay because Mickey had such a strong will to live.  Two surgeries later, he was walking better than he’d been able to in a long time, but we knew, from the extreme damage to the joints, that we were only buying him a little time.  Fast forward three years and Mickey has recently been having seizures, his front ankles have collapsed from years of shifting his weight forward to walk, and now he was sneezing and coughing.

Kathryn’s video today showed his back left leg to now have come completely out of the joint, and I’ll post that video to an unlisted link, but be warned it is extremely hard to watch.  There were no more options for our sweet Mickey.  Amputation of the leg would put even more pressure on his collapsed front legs and his other badly damaged back leg.  His body was just completely giving out on him and no matter how much we wish we could make him better, there was nothing left to do.  Dr. Wynn came in today to euthanize him so that he wouldn’t know another day of misery.  Now he is free of pain and running toward his next big adventure.  Thank you to everyone who loved him, cared for him and who had the strength today to do what was best for him.

Link to the video of him trying to walk today:  https://youtu.be/9MiYt4_MTvI Mickey Cougar’s story is so long and heartbreaking that it will be hard to tell in just a few minutes.  (Watch his rescue video to find out the whole story.)

Animal House, in Moulton, AL, was a backyard zoo that operated with a USDA license up until 2006 when it was revoked.  At the time Alabama had no laws to regulate the private possession of wild animals, so once USDA washed their hands of the mess, there was virtually no government oversight of the facility.  Former volunteers say the owner had no other source of income than her social security check and that she had contracted with the county to become their dog pound.

In 2013 conditions there were reported to be so grim that the county revoked her contract and rescue groups went in to save the dogs and cats housed at Animal House.  One of the rescuers video taped a leopard who had been injured by a Doberman, two years prior, and sent the photos and video to Big Cat Rescue asking for help.

We were told that the owner had been feeding the dogs and cats there to her wild animals and that the Doberman had fought back.  Her family said the dog had just been in an adjacent cage and the leopard reached through.  Regardless of whether it was malice or neglect, the leopard’s leg had bones sticking out and festering tissue exposed.  Big Cat Rescue tried, unsuccessfully, for months, to get USDA, the USFWS, the State of Alabama and the local Sheriff to either confiscate the leopard or get her medical attention.  When they failed to help the cat we appealed to the media, who said there wasn’t a story if they couldn’t get permission to go film the cat themselves, which the owner was NOT going to allow.

The leopard died and had probably suffered unimaginable agony for two years or more until her wounds killed her.

We never gave up and 2014 began negotiations with the owner, her family members and the state department of natural resources to rescue the cats who still were being kept there.  When we saw the condition Mickey Cougar was in, we didn’t know if he would make it at all.

Both of his back knees suffered from torn ligaments so that when he walked the bones on top would just roll and slip off the bottom bones.  It was painful to even look at him.  Despite the fact that he was grossly underweight and had almost no muscle mass we had to make the difficult decision to sedate him to evaluate the damage and then again to try and repair it.

Dr. Hay, an orthopedic specialist, did the surgery, using something like a synthetic ligament mesh, to mend back his first leg.  Dr. Wynn used a new technique of spinning the patient’s own blood and harvesting platelet rich plasma, to quicken healing, which was injected into the other knee.   We had to reduce the size of Mickey’s cage, so he takes it easy while he is healing.  We will probably have to go back and do surgery on the injected knee once the first one has healed.

Meanwhile Mickey seems to have a strong will to live and we are going to give him every chance possible at a happy life. 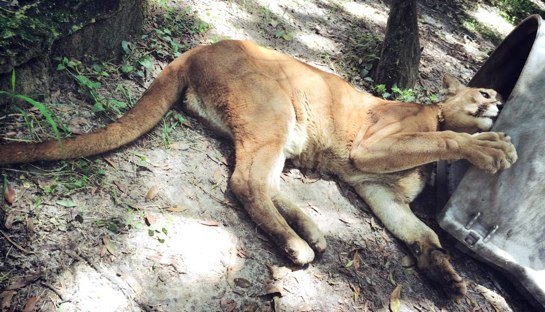 I can’t even look at Mickey without tearing up because he is at once, both so pitiful and yet so determined to overcome. We knew it would cost a lot to try and fix him.

For the past week or so, Mickey has been getting rehab treatments, to encourage him to use the leg and build up some muscle. It is Mickey’s nature to have two speeds: Laying around and full out running for the dinner plate. The twice a day rehab work gives him food treat rewards for walking slowing and deliberately. We can see a pronounced improvement in the leg that was repaired, as he can keep the knee in place much better, but because of his lack of strength, from nearly starving to death in Alabama, and having no muscle, he trips over his back feet.

We film some of these sessions so the vet can see his progress and have shared some of them online, but it hurts to watch.

Dr. Hay visited the sanctuary recently, to see the rehab session himself. He said at Mickey’s current pace he thinks the surgically repaired knee should be strong enough that he can operate on the other side in 3 to 6 months.

Everything has its side effects, so even the pain meds have to be very carefully monitored, as too much can make him nauseous or cause him to sleep all the time and too little can make him not want to move at all.

Whenever there are cats in need of rescue, we always offer to take the oldest, sickest or most impaired because our sanctuary is unique in its ability to provide the best veterinary and supportive care. We have 2 vets that have been with us for about a decade each. They visit twice a week and provide all of the house calls for free. We have specialists in orthopedics, eyes, cancer and teeth who dramatically discount their work because they love the big cats. We have 14 paid staff, who do administrative work and manage our 80-100 volunteers who put in the collective hours of 40 more paid staff. By spending the time and money to train expert volunteers, our donors’ money can go directly to the cats.

The reason we can provide such excellent care is because people like you care. It is your donations that keep the food coming every night, the medications on time, the emergency care and the ability to take in other cats like Mickey, who wouldn’t have a chance anywhere else. Mickey Cougar was rescued in 2014. He was in such bad shape that we weren’t sure if we should try to fix everything that was wrong with him, or put him out of his misery. This video does not seem to have ever been posted, as it was 40 minutes long and 6GB in size. It’s been cut down to 12 minutes and shows the horrible decisions we often have to make.

Which Mickey first arrive he was in such bad shape keepers had to make a special box den for him because he was not able to step up into a regular den or a concrete den.

Mickey LOVED sicles.  His favorite sicles were blood sicles, tuna sicles and sardine sicles.  His friends often sent him cans and cans of sardines & tuna.  Keepers joyfully made Mickey sicles.  In his last months, Mickey had a hard time with the Florida heat so he had his very own fan and got many sicles every day, of which he LOVED!!  Watching him lounging in front of his fan snuggling a sicle and licking away was a precious sight keeper will always remember.

Mickey also loved his toys.  He would work hard getting all his toys gathered up in one spot and then bat them off in different directions again.

As time went on and Mickey had his surgeries and his physical therapy he finally was able to get in and out of a big concrete den so a brand new one was made for him.  He LOVED his big new den!  Keepers had to make a special window in it so when he was inside it they could safely peep in at him.

Every section of Mickey’s cage had a den so he would not have to walk too far when he wanted to go inside.

Here are some random photos taken over the course of the time Mickey was with us.  Some were taken shortly after his arrival, others were taken at various times since then.  They are not in any particular order.