0
SHARES
159
VIEWS
Share on FacebookShare on TwitterShare via Email 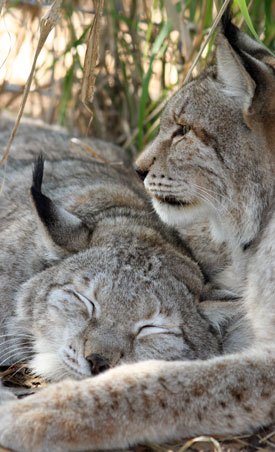 Natasha (on left) was rescued, along with 27 other cats, from a fur farm. She cost more than any of the other cats because she is exquisitely beautiful. She has survived poisoning and a very scary seizure in 1996. She was diagnosed with heart worms in 1997 and recovered very slowly. We had never seen heartworms in the exotic cats, and as a result of her infestation have made it a policy to treat all of Big Cat Rescue’s animals with Ivermectin, which is a de-wormer, as a preventative.

Natasha shared a Cat-a-tat with Willow and they loved each others company. One of Natasha’s favorite things to do is chew. She, like most Siberian lynx, have a love for chewing. She will chew just about anything, sticks, pine cones, cardboard tubes, but her favorite of all are pineapple tops. She does not eat these things, but rather tears off tiny pieces of them with her front teeth and then spits it out. She will continue with this until there is nothing left of whatever item fell victim to her chewing. Natasha is lovable and fun-loving and considers no one a stranger.

She was raised with Willow and Alexander, the bobcat hybrid, and still remains one of the friendliest cats here. She shared her large grassy habitat with Willow until her death in 2013. Ironically, they were often seen lying in the sun grooming each other’s beautiful fur coats.

Big Cat Rescue has already bought out every U.S. fur farm known to us and we would like to do the same with the Canadian ones. We determined, however, that in order to purchase the cats remaining at the known Canadian farm, and build barely adequate caging for them, it would have cost over $95,000. back in 1997.  Since then we have determined that we cannot rescue our way out of this problem and are devoting time and energy to changing laws to protect the animals.  Visit www.CatLaws.com to help.