by BCR
in How To Start A Sanctuary, News World
0 0
0
0
SHARES
299
VIEWS
Share on FacebookShare on TwitterShare via Email

Giving an Exotic Cat a Pill

Giving a cat a pill can be a harrowing experience for both you and the cat. Exotic cats are worse because they are not as trusting, have a keener sense of smell and are more powerful. As with any aspect of exotic cat ownership, you must rely on your higher intelligence rather than brute force if you are to succeed. While it may be physically possible for you and all of your closest friends to tackle the cat and force a pill down his throat, this sort of force destroys any trust the two of you may enjoy and will not be forgiven for months or even years.

When we first dealt with sick exotic kittens we would catch the cat and restrain it by the scruff on the floor, so that it could only back into our knees and we could hold the rest of the kitten by squatting over him. An exotic cat can be scruffed and turn completely around inside their loosely fitting “pajamas” and bite the person holding. They can also jump and twist until they seriously injure themselves. This is why we grabbed as much scruff as we could (taking up all the slack possible) and then knelt down over the cat holding him between our knees on the floor. 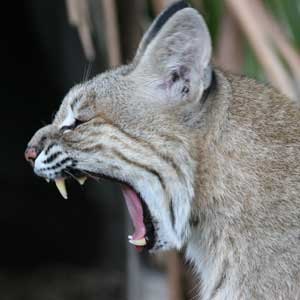 The other person would have the pill inserted in a pill gun ( a pencil like apparatus that holds the pill until you press the plunger ) and the kitten would be hissing and snapping at the air, making the insertion of the “gun” into the mouth pretty easy. We would insert it as far back as we could see and depress the plunger. Using the plunger we would then gently stroke the cat under the chin and blow at his face until we saw him swallow.

When he would lick his lips the deed was known to be done. I go into detail on the hard way just in case you find yourself with no option. We always try to use a drug that requires as few doses as possible, for obvious reasons.

No matter how difficult it may be to medicate the cat, it is imperative that every dose be administered, because failure to do so can be fatal to the cat, if not now perhaps at a later time. To stop and start treatment over and over will cause the cat to become immune to the drug.

Most drug therapy runs a course of twice a day for ten days and by the second dose the cat is hiding from you and hissing at you every time you look in his direction. All of your training has come to an end. The cat is sure that you are out to kill him and that he has only barely escaped you twice. Even if you do manage to get all twenty doses in the cat and he recovers, it may take a very long time to make any personal progress with him.

We had a lot of kittens our first year and most of them forgave us within a month or two, but one, Little Dove was terrified of us for over a year and a half. We finally sold her to a pet home thinking that maybe she would not associate her new owners with medication, but several weeks later they called to say that she really hated them and had even escaped and been on the lam for a week.

They were able to recapture her in a barn and shipped her back to us. When she got back she talked until she was hoarse, as though she was telling me every moment of her time away. I cried at hearing the terror in her tale. Her bad time with inexperienced “doctors” made her a “pet” only a mother could love and to avoid the possibility of this happening to you it will be well worth your time to exhaust every other possible method.

Our favorite method is to hide the pill in a piece of food. Without exception, all of our cats adore chicken hearts and chicken gizzards. When it is time to medicate we do so at regular feeding times, so that the cat doesn’t know there is something weird going on.

A chicken heart is the perfect little pill container. It is slick and has a little hole pocket already cut in it. We will throw one or two without pills, so that if the cat is going to chew around looking for a pill that he will see there are none, and then when he’s swallowing them whole, we throw in the one with the pill.

If the cat is very sick he may quickly get nauseous, so don’t let him get full before he gets the medicated pill. Bring along a few extra hearts in case he chews the pill out and you have to stick it in another one. If the cat is running loose and you need to pill him but he gets crazy over food, we put the pile of medicated treats and unmedicated treats on a paper plate or a long handled spoon with the top ones being the bogus ones. Unless the cat was allowed to get too sick before treatment started he will usually inhale the treats without ever chewing.

Second only to hearts for usability are the gizzards. Because they are so chewy and the chewing will result in the cat biting into a nasty tasting pill, we cut a square just big enough to tunnel out a little pouch for the pill, trimming off anything that they may hesitate and chew. Stick a sharp knife into the chunk and keeping the entrance hole only large enough to force the pill through. Hollow out a place in the middle to harbor the pill. Sometimes the pills are sugar coated and when they get wet they may pop out. Your Veterinarian can often prescribe a Pediatric chewable version, so that if the cat is a chewer, he won’t bite into a bitter pill. If you must give a powdered medication, you can buy empty gel caps and fill them with the powder and give as above.

We had a Lynx that cannot be tricked into swallowing a pill, and if the cat chews every bite of everything suspiciously, then you may want to crush the pill, mix it with some honey, karo syrup or Nutrical, to mask the bitterness, and then inject this syrup into the cat’s food. If the Veterinarian says to pill the cat two times a day, this means the cat has to actually swallow the pill, and keep it down, twice a day. It does not mean offer it twice and if he takes it, fine and if not, too bad. If not before, then after the first bout of medicating that you and the cat experience, you will do everything super humanly possible to keep the cat from getting sick or hurt in the first place.