by BCR Staff
in Memorials, Rescues
0 0
2

0
SHARES
256
VIEWS
Share on FacebookShare on TwitterShare via Email 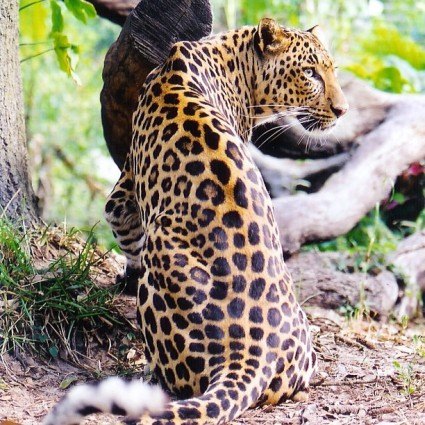 Simba is a male Asian spotted leopard born on 6/6/94. He came to Big Cat Rescue on 8/4/94 with his sister, Nyla, as a bottle fed baby. Simba had the misfortune of being born the wrong sex.  Backyard breeders always want more females than males.  Since his sister Nyla was cross eyed, he was not a good candidate for breeding and was unwanted.

Seeing what a beautiful leopard he has grown up to be, we are fortunate that we were able to take him in to save him from a long life of breeding.

Simba has always had a predisposition for the female volunteers who care for him.  This was never more evident than when he was recently relocated to a cat-a-tat near Reno, a former circus performing leopard.  Though bigger than Reno, Simba spent most of his time hiding away in his den until he was coaxed out by a female staff member who sat with him and reassured him that everything would be all right.  The term “big scaredy cat” never fit anyone more on that day than it did Simba.

He quickly adjusted to his new surroundings.  He just needed the reassurance, as we all do sometimes, from someone who cares deeply for him.

Simba has arthritis in his old age and is being treated with pharmaceuticals, supplements and laser therapy.

The leopards at Big Cat Rescue are definitely some of the funniest cats at the sanctuary! They’re often “break dancing”, playing with enrichment, stalking tour guests and just being goofy! But remember despite how cute and cuddly they may look sometimes, they are still very much WILD and their mood can change very quickly from fun to ferocious!

More Info About and Photos of Simba

Simba Leopard had an MRI and surgery the last week of December 2014. Here is a link telling you what happened to Simba’s Leopard’s tail:  http://bigcatrescue.org/big-cat-mri/

Leopards Simba and Nyla Re-Introduced After 15 Years (scroll down the page to find their pix): http://bigcatrescue.org/now-big-cat-rescue-feb-8-2014/

Simba goes on vacation (scroll down the page to find his photos): http://bigcatrescue.org/now-big-cat-rescue-feb-19-2014/

On this page there is a video of Simba and Nyla meeting at the Howdy door: http://bigcatrescue.org/now-big-cat-rescue-jan-30-2014/

On this page is another video. In that video is a clip of Simba going to the vet.: http://bigcatrescue.org/now-big-cat-rescue-jan-11-2014/

More clips of Simbda can be found in the videos on this page: http://bigcatrescue.org/cat-chat-45/

How does picking up after our leopards help save tigers in Indochina?? Find out how here: http://bigcatrescue.org/bcr-leopards-answer-the-call-to-save-tigers-in-indochina/

See two photos of Simba enjoying his platforms and ramps when the Holley’s first made them for him: http://bigcatrescue.org/today-at-big-cat-rescue-dec-17/

Two more photos of Simba on his platforms: http://bigcatrescue.org/today-at-big-cat-rescue-aug-18/2/

Lynda Licht Aug 22, 2015
Simba, you were so loved and that’s because it was obvious that you loved us so much back. Besides being incredulously handsome, you were attentive and giving with your time – always coming over to investigate what we were cleaning etc. And we’ll never forget how much you loved your meals and treats. Months later it still doesn’t seem right to drive down Tiger Row and not see you and hear your tell-tale whimpering. Thank you for simply being you. Love and miss you!

Sharon Henry May 16, 2015
As I came to say goodbye to you, it seemed as if you were so tired and ready for rest. Even so, it was one of the hardest goodbyes I’ve ever had to say. I have always thought of you as BCR’s “Resident Elderly Gentleman”. You held yourself with such confidence and grace…a real class act. Even as time passed and it was harder for you to get around, you held on and remained dignified and I respected you even more for that. It was as if you were saying, “always stay true to yourself”. One of life’s greatest lessons. Thank you for that kind sir. I will forever hold you close in my heart dear Simba and will remember and love you always.

Carole Baskin May 15, 2015
Tears streamed down our faces as we euthanized Simba Leopard today. (May 8) He’s been a part of our family for 21 years. He and Nyla were born on my birthday in 1994. Simba’s arthritis was so bad that he would attack his own limbs and had bitten off his tail last December. The pain meds just weren’t enough to give him a good quality of life, as he was so frustrated.

Frustration wasn’t new to this incredible cat. Of all the cats I have bottle raised, no one got more frustrated with it than Simba. He insisted on laying on his back and holding his own bottle. That’s about the most dangerous way in the world for a cub to be fed, but he wouldn’t have it any other way. His sunny disposition would turn to fury if I tried to help.

We thought he would be the first to go, as he’s suffered more from arthritis than his sister, but Nyla left us suddenly a year ago. Today, we knew we were going to euthanize him at noon, so I went out to spend the morning sitting in the dirt with him. He loved company. When I arrived I saw that Nyla, in the form of a huge Monarch butterfly was hovering over him. She stayed with us both for a while and then left. I don’t think she could bear my sadness.

I brought a roll of paper towels because I knew that Jamie and I just couldn’t keep up the stalwart appearances. Gale declined them and Dr. Wynn said she would cry on the way back to work. I did all I could to hold back the tears, but seeing Jamie cry brought me to me knees. After Simba had peacefully left his body, I planned to go back to my office and cry it out, but people were in the office.

I figured I’d go drive somewhere to cry, but Jamie said Journey, the baby bobcat we rescued at the age of 9 days on April 30 was doing poorly and she needed me to help give him sub q fluids. Some days it seems that I just go from one sadness to another. This has been one of those days. (Journey died 36 hours later.)

I’ll remember Simba like he was in this photo and hope he will visit me from time to time.