0
SHARES
16.7k
VIEWS
Share on FacebookShare on TwitterShare via Email

Season 2, as expected and indicated in the Trailer, continues to do everything they can to falsely convince the viewer that Carole was involved in Don Lewis disappearance. It is primarily nothing more than a rehash of the first season with a few misleading additions. The idea that a notary public who has hundreds of documents placed in front of her to notarize signatures without reading their contents is going to remember signing a particular document is absurd. Statements that the unlicensed bounty hunter did not physically go to other countries do not conflict with statements he made to Carole that he had “looked into” other countries.

They conveniently omitted that in the scene when Carole told Don to leave the property and not come back after his threats to kill the cats, she was telling him not to come back until he had been examined for Alzheimer’s, which had been under discussion because of his deteriorating behavior.

Here is the truncated clip used in the Series:

“He said he would poison ALL of the cats with antifreeze. I told him to get off the property, and not come back. I told him that if he did not go, I would have him arrested.”

Full diary entry where they deleted the parts in italics:

“He said he would poison ALL of the cats with antifreeze. I asked why he would inflict such a painful death on an innocent animal, and he said it would be worth it to him, just to see me suffer. I told him to get off the property, and not come back. I told him that if he did not go, I would have him arrested. I told him that he could not come back until he had been tested for Alzheimer’s disease and if it proved that he was sane, and just evil, then he could have his divorce, but if the tests concluded that he was ill, then I would take care of him until he died.”

Consistent with their prior lack of ethics, the producers continued with the technique they used in Season 1 of having accusatory statements about Carole followed by images or video of her chosen to intentionally reinforce and magnify the accusations. The result, predictably, has been a new surge of social media hate directed at Carole the day of the release.

They also continued to allow Joe Exotic to make false statements without contradiction leaving the implication they are true. For instance, Joe saying Ashley Webster came to the zoo to be a “playmate for Jeff and Lauren” when we are told that according to witnesses she was drugged and raped at the zoo. Another example of hiding the truth is continuing to give the absurd false impression that it is actually Joe singing the songs, when in fact the singing was just one more example of his lying to get attention.

With all the talk about Joe Exotic being “set up” and witnesses recanting, the producers again fail to point out that it was Joe’s own words from the recorded conversations that played a key role in his conviction. One juror explained it this way to the Huffington Post:

“There was a long recording of [the apparent hitman] meeting Joe,” she said. “We could have convicted on both murder-for-hire counts based on one sentence that Joe said, which was: ‘The first guy that I hired to kill her ran away with my $3,000. Now we’re going to try this again.’”

There are some redeeming features of Season 2. Season 1 portrayed Don Lewis as an innocent family man and businessman. Season 2 confirms he was still flying planes without a license and therefore could have gone down over the gulf, that he could have gone to Costa Rica with small planes by making stops along the way without it showing on his passports because he had other fake passports, that he was bringing large amounts of cash to Costa Rica, and, importantly, that he was dealing with dangerous individuals who may have been responsible for his demise. Also noteworthy is the document they display from Homeland Security, which was not formed as an agency until 2002, five years after Don Lewis’ disappearance, saying they had information that Don Lewis was alive in Costa Rica. Why is this just appearing? 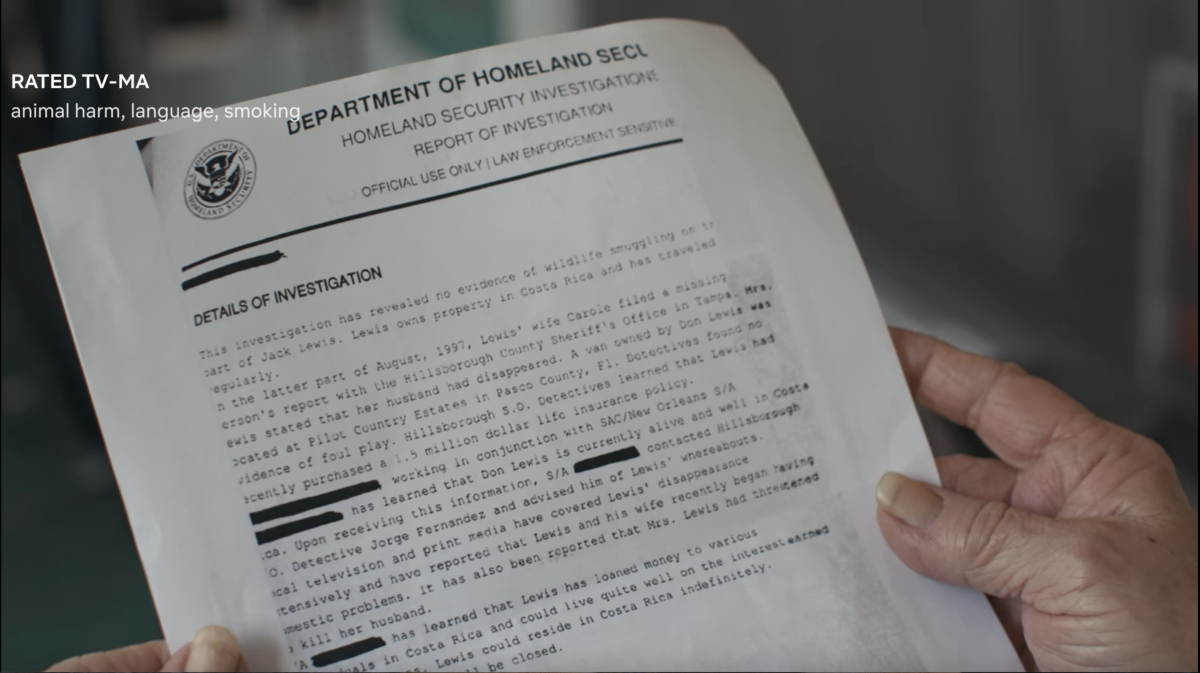 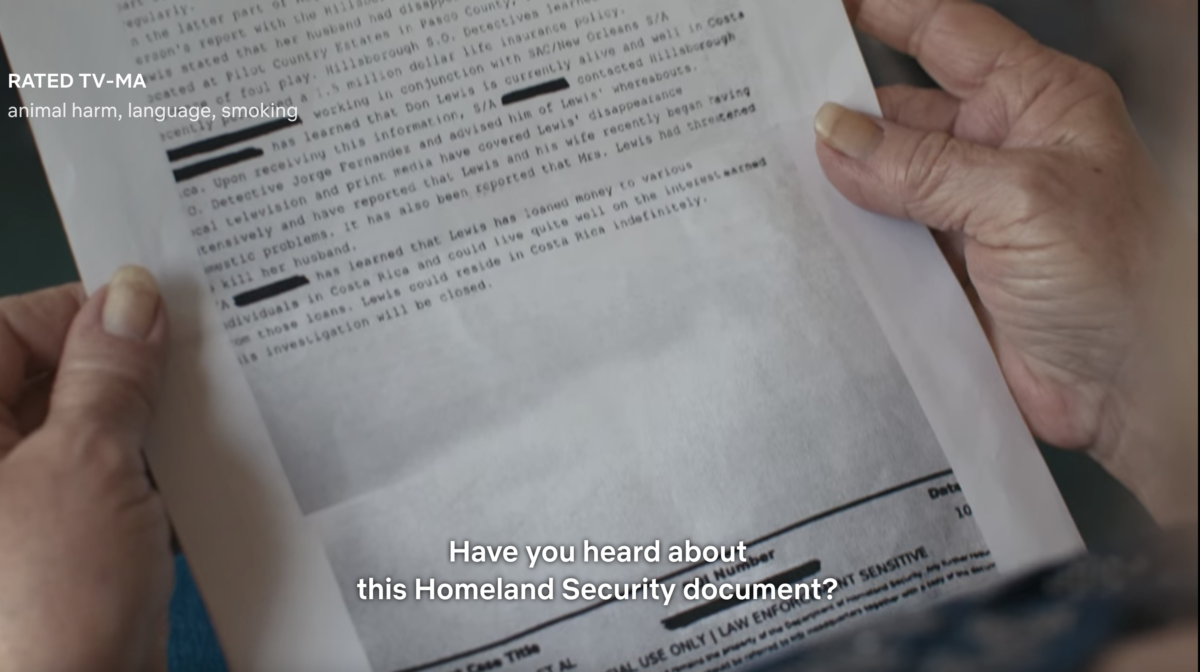 The other possible positive is that in following the demise of Tim Stark and Jeff Lowe the Producers finally show some of the animal abuse, which they falsely claimed was their intention in Season 1. They also include a conservation message at the end, and even mention the Big Cat Public Safety Act in the final text screens. We applaud them for that.

In our view, producers Eric Goode and Rebecca Chaiklin have two things in common with Joe Exotic. First, they do not treat lying as a moral issue. They treat it as an art form, proud of their skill. Goode bragged to us about lying to the exploiters to earn their trust and their willingness to be filmed. We were naïve in not realizing they were doing the same to us. But, in fairness to us, we feel they are very skilled con artists. Second, we believe that, like Joe, the producers do not care at all about the abuse of animals in captivity. If the producers did, they would not continue to falsely disparage and try to discredit a person who is a leader in the battle to stop the abuse.

Those who want a true look behind the scenes at what goes on in the big cat exploitation industry, where everything is real, including the gunfire and digging for tiger skulls at the GW Zoo property, can find it in our new two-episode series Carole Baskin’s Cage Fight streaming on discovery+.

This is a dropbox link to the transcripts and evidence, which back up the juror’s statement, but you should order them directly from the court to verify their legitimacy.  https://www.dropbox.com/sh/e460twf38h886lo/AAABknjXRLJSBrCx1vhz9r-Ua?dl=0

And for everyone who still wants to believe that Carole killed Don, then please explain to us why you think armchair detectives, or you are better informed than the Special Agent in Charge at the FBI in this Homeland Security Document which says “Don Lewis is currently alive and well in Costa Rica.”  This was reported to Jorge Fernandez of the Hillsborough County Sheriff’s Office by the SAC at the FBI according to this letter.  While they have purposely redacted the SAC’s name and date, we do know that there wasn’t a Homeland Security until November 2002 which was 5 years after Don Lewis left home in Tampa, FL.