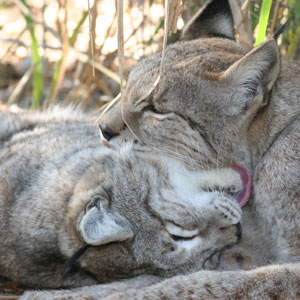 Willow (on right) was born at a fur farm in Canada. We had bought all of the kittens the farm had and they were shipped here in crates so small that the kittens could not move. The little wire crates appeared to be full of sticky, smelly gray fur. We opened the crates and pulled out the contents, and found a group of soiled, starving, sick and stressed little kittens. None of them died in transit, which was a astounding, considering the condition in which they had arrived, but sadly several did not survive long after.

Willow was always one of the skinniest and willowiest of the group and thus her name. She was raised with Natasha and Alexander, the bobcat hybrid, and still remains one of the friendliest cats here. She shares her large grassy habitat with Natasha. Ironically, they are often seen lying in the sun grooming each other’s beautiful fur coats.

Big Cat Rescue has already bought out every U.S. fur farm known to us and we would like to do the same with the Canadian ones. We determined, however, that in order to purchase the cats remaining at the known Canadian farm, and build barely adequate caging for them, it would have cost over $95,000. back in 1997.  Since then we have determined that we cannot rescue our way out of this problem and are devoting time and energy to changing laws to protect the animals.  Visit www.CatLaws.com to help.

Like all wild cats, Willow was stoic and showed no signs of being ill until she refused her food one night.  The next day she seemed just too tired and stiff to move so she was taken in to the vet where she was found to be in the final stages of renal failure.  She made it clear that she was ready to go.  Natasha sleeps most of the time now and is a year older than Willow.  When she is awake she seems to be looking for her old friend from her resting spot.  We are heartbroken at the loss of Willow and even more so, to see Natasha looking so sad.

Meredith Pennino
Jan 25, 2013
Willow, my lynxy lady. You and Natasha have always been a delight to know. Purrhaps it's her grey fur and your beautiful brown, and her old lady arthritis that made me think that her day would come before yours.
I am deeply saddened to lose such a wonderful friend; more so to know that until the day comes when you are reunited that you and 'Tasha are separated. I am however joyous that you are free.
You had a whimsical spirit and it was a joy to know you, but no lynx belongs in a cage. Your life would have been most fulfilled living free, and now you may do that.
I already miss you, as does 'Tasha, but we will meet again one day, my lynxy lady love <3

Regina Rinaldi
Jan 4, 2013
Pineapple tops will never be the same here at BCR.  The lynx sisters were an important part of my beginning here at BCR. They were one of the first cat-a-tats I cleaned, and they showed me how absolutely sweet they could be. So everytime I approached, I called out Tashy-Willow as if they were one...and still do, until now. I'm very saddened by this news as Willow was one of my favorites. She was as sweet as they come and beautiful as well. Run free pretty girl, you will always be loved and forever missed.