by Deb Quimby
in Bobcats-Rehab, Rescues
0 0
0

0
SHARES
437
VIEWS
Share on FacebookShare on TwitterShare via Email

Sadly all three of these kittens died with the primary culprit being Calici virus, which is common in domestic cats but we have never seen it in wildcats before.  None of the bobcat kittens were exposed to domestic cats while at Big Cat Rescue.  They were vaccinated as soon as they were stabilized after intake, but their weakened systems just could not mount a strong enough defense.  Cahira, the fourth kitten who arrived that same day later showed signs of Calici and may have been the originator of the virus for the four of them, but being stronger, she was able to survive.  Cahira and Byrdie have been paired and are currently in rehab outside now.  https://bigcatrescue.org/cahira/  and https://bigcatrescue.org/byrdie/

The other two bobcats, who were about 6 months old at the same time as these rescues are Pia and Venkman who are in rehab outside now too.  https://bigcatrescue.org/pia-venkman-bobcats/

BREVARD COUNTY, Fla. – Six blue eyes and paws wandered the wild, all three siblings weak, sick, and one found almost drowned. The trio was orphaned after their mom was hit by a car and died earlier this month.

The three siblings were found in Brevard County thanks to a Melbourne man who made the call to Wild Florida Rescue. From there, they were taken to a local hospital where they spent the night.

Now, these kittens are being adopted by a famous family.

“At that point, we made arrangements with Big Cats Carole Baskin, as well as FWC, to confirm that is where they were to go… the next morning we raced them up there,” Pepe explained.

Tiger King’s very own star Carole Baskin will be hands-on for the recovery process of the kittens. Her daughter, Jamie Murdock, who is actually the president of Big Cat Rescue, told FOX 35 that they have already grown to love them.

“Each and every one has their own personality. You could really see that in this trio. There was one that was bigger and more robust, she is kind of the bossy leader in the group. I can imagine her being like, let’s go guys, let’s get out of the nest… momma is not going home,” said Murdock.

She added, “there is another one, sort of becoming my favorite. The underdog. His name is Ambrose. He was very weak upon arrival. He could barely keep his head lifted up. He had a hard time breathing, he had an eye infection… and then we have got the medium middle child that one is doing really well too. It kind of just goes with the flow and follows her siblings around.”

Happy to report that all three younger kittens made it through the night and have each gained an ounce thanks to the frequent meals and fluid therapy they are receiving.

All three were treated for fleas and began a course of dewormers since they tested positive for hookworms.

They are much more energetic and even spent quite a while throughout the night and today playing. 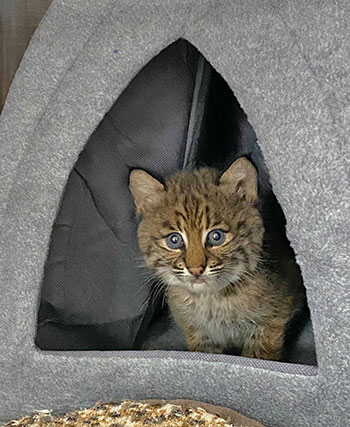 The trio have also been named!

Lilly is the healthiest and fiercest of the bunch, she seems to be the leader of the group.

She is not eating solid foods yet, but eagerly chomps at the syringe for formula.

Denali (Native American for The Great One) is the best eater.

She loves ground turkey, livers and even our balanced carnivore diet.

Denali readily eats all of her meals as well as her siblings’ leftovers! 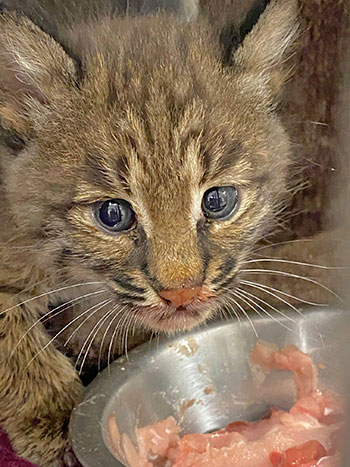 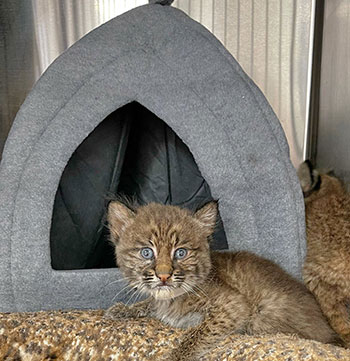 Ambrose (Greek for immortal) is the smallest and was the weakest upon arrival, barely able to lift his head.

Now he is playing with his siblings and loves pawing at the scratching post and playing tug of war with the ball attached to the top.

He is still not on board with solid foods, but also takes formula well from a syringe.

All three have perked up so much and we are already coming to the realization the better they feel the more of a handful they will be. We cannot thank Wild Florida Rescue for their tireless efforts enough. These adorable littles will have a second chance at a wild life thanks to their search efforts. 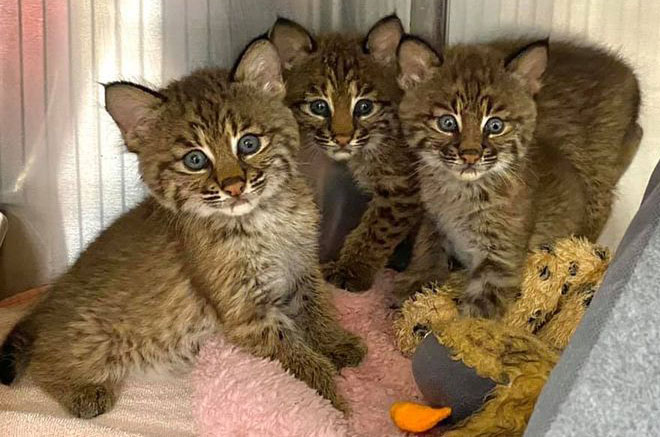 We are so very sad to report that Ambrose the smallest of the bobcat kitten trio has passed away. 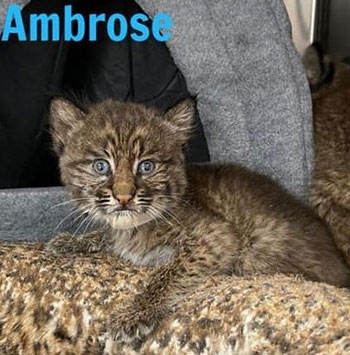 He started having respiratory issues yesterday and was started on antibiotics last night. Today his breathing was even worse, so he was taken to Ehrlich Animal Hospital for an exam with Dr Turner. X-rays showed his lungs were in very bad shape. He also had ulcers on his tongue and was anemic. He was treated with fluids, B12, steroids and oxygen therapy. He looked as though he was breathing a little more calmly and was even perking up.

He was brought back to the rehab hospital and minutes later stopped breathing. Rescue attempts were made but were unsuccessful. We are awaiting test results to determine the cause of his passing.

The FWC will be testing him for FLM (Feline leukomyelopathy) and doing their own necropsy. If it is calicivirus, all of the kittens were vaccinated against it upon arrival, so even if the others were exposed they are probably healthy enough to overcome it. 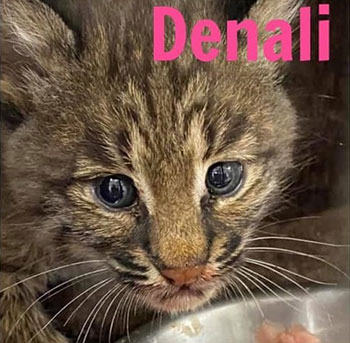 We are devastated to report that Denali the baby rehab bobkitten passed away enroute to the University of Florida.

He was acting normally before breakfast time. He was weighed and started on antiviral and antibiotic meds.

Later in the morning both he and Lilly had high respiratory rates and Denali was less playful than usual.

We decided to take both to UF for critical care.

Denali had been doing fine most of the drive then declined very rapidly. Jamie tried to revive him with no success.

Denali had what appeared to be a seizure and died just 15 min from the University of Florida.

He will be necropsied at the university.

The zoo meds department is currently running diagnostics on Lilly. She will have a ct scan, bloodwork, nasal swabbing and an IV put in to administer fluids and medication.

She will be housed in the critical care unit in an oxygen incubator. When Jamie dropped her off she was still very bright and alert.

Radiology says the prognosis is guarded to poor. She recovered ok from anesthesia and we will regroup in the morning. Meanwhile she is in an O2 cage with an IV getting fluids and antibiotics. If she is doing well in AM we can consider a few more days in ICU which will be $3,000 more than $2,000 already spent.

If not doing well UF said we should consider euthanasia.

Please keep the paw-sitive thoughts and prayers coming for Lily! They still do not know the cause of the illness in these kittens. Test results are all pending.

Last we heard; Lily survived the night but still in critical care. 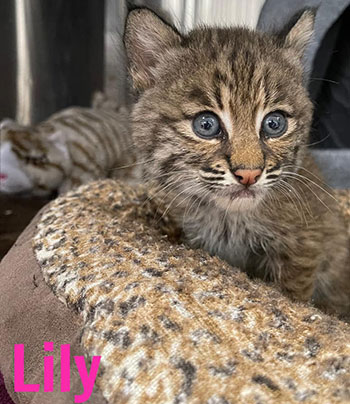 We are so sad to report that Lilly has passed away.

She will be necropsied as well.

Then her and Denali’s ashes will be returned to BCR.[/vc_column_text][/vc_column][/vc_row]