by BCR
in Articles by BCR, Most Requested
9

0
SHARES
1.5k
VIEWS
Share on FacebookShare on TwitterShare via Email

Big Cat Rescue Rehabilitates Bobcats for Release Back to the Wild

Is it your dream to rehab bobcats for release back to the wild?  Check out our FREE online course at https://www.zoocollege.com/course/bobcat/

Watch our Rehab Bobcats LIVE on this high-quality xplore.org webcam: http://explore.org/live-cams/player/big-cat-rescue-bobcat-rehab-and-release  If you cannot remember the log link here is a shortcut that is easier to remember go to BigCatCams.com and look for the Bobcat Rehab web cam link.

Upon arrival, the cats receive a full exam and given whatever medical care is needed for their injuries or illness. Blood is drawn and tested for infectious diseases.  They are vaccinated, dewormed, and flea treated.

Injured cats are given the time and supportive care they need to heal.  They must prove they can hunt and survive before being released.  Our six rehab pens are 230 feet long by 20 feet wide giving the cats 4600 square feet of natural space to learn their skills.

When possible kittens are given a domestic surrogate mother.  When a surrogate is not available the kittens are bottle fed but weaned from the bottle as soon as possible.  They are then raised with as little human contact as possible and given opportunities to learn to hunt.

Rehabbing and releasing bobcats is much more difficult than the rehabilitation of most wildlife. These magnificent little wildcats need every opportunity to fulfill their role in nature and Big Cat Rescue is here to give them that second chance.

10 Steps to Rehabbing a Wild Bobcat

This next video will give you a more in-depth overview look at our wild bobcat rehab and release program and procedures.

While we do bobcat rescue, rehab and release in Florida, we will not relocate bobcats as state law requires that they are released very near where they were captured. They must be released on at least 40 acres and we must get written permission from the owner/manager of the property.

Big Cat Rescue has decades of experience rehabbing and releasing bobcats back to the wild where they belong. We provide huge, naturalistic enclosures where these cats can learn or perfect their hunting skills before being released back to the wild. We have trained staff who are experts at capturing an injured bobcat or hand-rearing orphaned bobcats until a surrogate can be found.

We go to great lengths to keep these wild cats from imprinting on humans and monitor their care via surveillance cameras to make sure they are thriving. When they are healed, or old enough for release (about 18 months of age) we find the best habitat possible for sustaining them and set them free to live out the life that nature intended.

Will YOU Help us Rehab & Release more wild bobcats?

This rehab and release program is made possible by donations from friends like you.  Your donation is tax deductible.

Did You Know?  Here at Big Cat Rescue, literally 100% of your donations are spent directly FOR THE CATS!!! We are able to adhere to that strict policy because the other sanctuary expenses, administrative expenses, salaries etc come out of tour fees and other sources of income. We are extremely serious about donations being used JUST FOR THE CATS!

Because of adhering to that strict policy regarding donations, and all of the other ways Big Cat Rescue is transparent in our operations, we have earned Charity Navigator‘s highest 4-star rating for “sound fiscal management and commitment to accountability and transparency” EVERY YEAR since we were first evaluated by them in 2010.

If you have a bobcat emergency outside of Florida. Things to consider when choosing a Bobcat Rehabber.

If you have a bobcat emergency in a state other than Florida, we can help you find a rehabber or will be a resource to wildlife rehabilitators who need help with bobcats, lynx or cougars. When you are searching for a bobcat rehabber ask the following questions:

1. Do they have experience with bobcats?

2. How big are their rehab enclosures? (Ours are 4,600 square feet per cat or litter)

3. Do they feed a live diet of prey to ensure that the cats will be able to hunt for themselves?

4. Do they keep people, including themselves to the extent possible, away from the bobcat so that they do not imprint on people and end up approaching humans after release?

Rehabbing and releasing bobcats is much more difficult than the rehabilitation of most wildlife. These magnificent little wildcats need every opportunity to fulfill their role in nature and Big Cat Rescue is here to give them that second chance.

No one is allowed to trap and relocate bobcats so anyone who tells you that they will do that is probably trapping them to use as bait for training dogs.

Get the flier to share with your neighbors about Living With Bobcats https://bigcatrescue.org/000news/pdf/2009/BCR_FLBobcat_Brochure_Web.pdf

Help Raise Awareness while helping us save more cats. 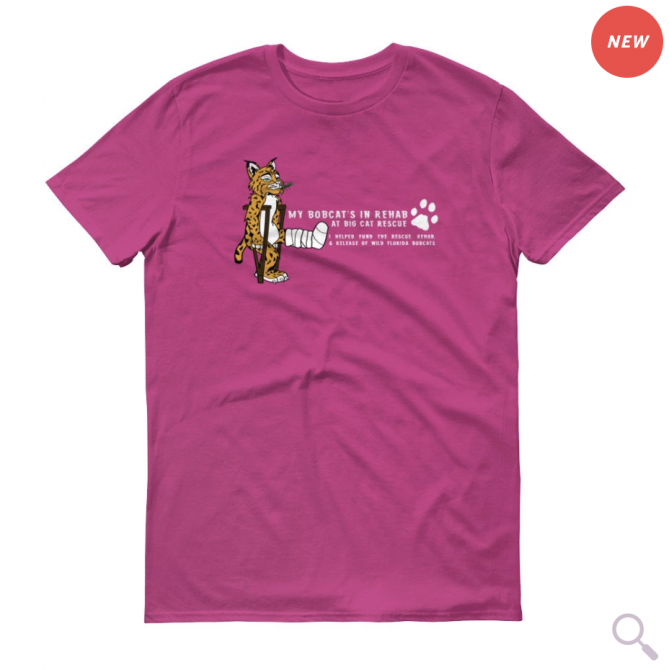 Jamie created a fun shirt that promotes our Bobcat Rehab and Release Program.

This funny shirt helps with some very serious work to protect our native bobcats, which in turn protects the entire ecosystem.

How to Care for a Rehab Bobcat

Cage rest sounds pretty peaceful for the cat, but it’s a real challenge for the caregivers.

What do Rehab Bobcats do all day?

Find out more about some of our recent bobcat rescues, rehab and their release back into the wild.

When this page rebuild is completed below will be a list of previous bobcats that have come through Big Cat Rescue Wild Bobcat Rehab and Release Program and returned to the wild where they belong.  Click on each cat’s name to see photos, videos, information about that cat.  Please bear with us while we rebuilding this section of the website to make it more readable from mobile devices.  We will add more cats below as this work on this website section progresses.

Flint – Unfortunately, due to all of Flint’s injuries and medical issues he is not a candidate for release and is a permanent resident at Big Cat Rescue.

Aphrodite – On Valentine’s Day, February 14, 2018 Carole got a call from a rehabber that does not rehab Florida Bobcats. Someone had dropped a Florida Bobcat off at their gate. – Released 2018

Clover and Lucky – Carole got a call from the new management of the Busch Wildlife Sanctuary in Jupiter asking if we could take in 2 orphaned bobcat kittens to finish their rehab for release back to the wild. – Released 2018

Shamrock – Shamrock is a native Florida bobcat kitten who appears to have been born around 1/15/18. She was found, separated from her mom on Feb. 2, 2018 by a group of people who called Wildlife Inc., on Anna Maria Island, to come rescue her. Damen Hurd, of Wildlife Inc., said they searched for the mother and could not reunite them, so the kitten was nursed to health while they looked for a facility that could offer her the next stage of rehab.- Released 2018

Bravo and Tango – We were right in the middle of doing an evening Facebook LIVE video when a call came in from Chris Scott of Raccoon Rescue in Milton (near Pensacola) Florida. A 100 acre burn had separated a mother bobcat from two of her kittens. We can’t know for sure, but really hope she was able to safely move the rest of her litter before conditions deteriorated to the point of having to abandon all hope for the last two boys. They were turned into the local rehabber, but she wasn’t familiar with hand rearing bobcats, so she went to the Internet to find out what she needed to do next.

Echo – Echo was found by firefighters, wet and shivering, and all alone, after a prescribed burn in S. Florida on June 10, 2018, and taken to the Busch Wildlife Sanctuary in Jupiter, FL. Three days later Big Cat Rescue was contacted by BWS asking if we’d be willing to rehab the orphaned kitten for release back to the wild.- Released 2018

Foxtrot – The morning of June 23, 2018, Carole and Kathryn picked up a bobcat kitten from a rehabber. She had been found 48 hours earlier.- Released 2018

Alpha Rescued – August 28, 2018 at approximately 7-8 weeks old. This kitten was found all alone by a man right before a huge storm with no mother or siblings in sight. She will be release in early 2019.

Click on each cat’s name to get a page with their full story, photos, & videos.

Noel –  Hit by a car on Christmas Day 2017.  She sustained two broken legs, three broken bones.  Her release date is coming up soon.

2003-2016 Big Cat Rescue has had 31 cats come through the rehab program. In addition, we have gone on 2 calls where we have seen the injured bobcat but were unable to catch it.

Hope the baby bobcat was raised by a domestic cat.  That’s the BEST way!

Have you seen me? – On July 18, 2017, a mother bobcat was struck and killed in the 33803 zip code area of Lakeland, FL. People who work in this area, sent photos of the 2 pound, orphaned baby on July 21 to us and we have searched the area and set up humane traps to try and capture the kitten.  Read the story & see photos.