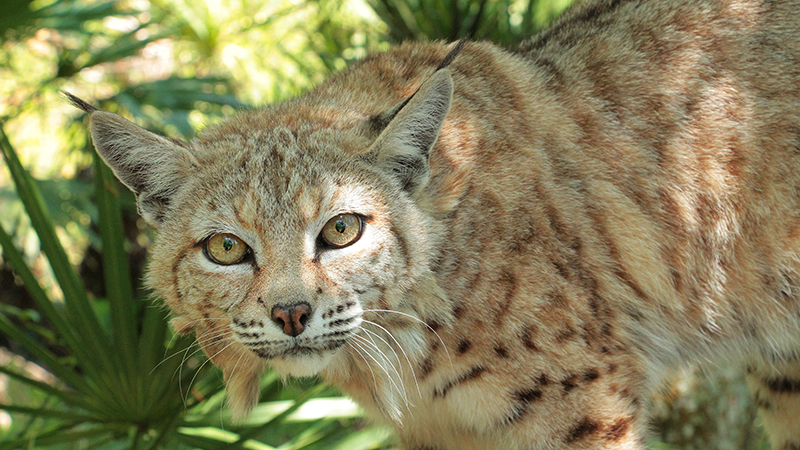 Don’t They Miss Being Petted?

I hear that almost every time I explain that we are a NO CONTACT facility.

Wild animals shouldn’t be kept as pets.  Most of the cats at Big Cat Rescue were once kept as pets who are usually discarded once they become adults and begin to spray and bite.  We do not allow contact between staff or volunteers or the public with the cats; even the small ones.  There are a lot of reasons:

1.  The cats are solitary by nature and do not seek our affection.

2.  It is dangerous to have any part of your body on the same side of the fence as the cat.

3.  It gives the false impression to those who see the photos or videos to think these cats might make good pets.

For many years we did not allow any kind of contact but as our population of cats has aged they are less able to groom themselves.  80% of our cats are over the age of 15 which is already several years older than these cats live in the wild or in most other facilities.  Some of our cats cannot groom off the winter coats in areas around their backs and necks so we are trying something new with a specially made back scratcher, available at Bed Bath & Beyond.

It looks like a car’s radio antennae and is extendable to keep the Senior Keeper’s hands out of striking distance.  It has a little hand of rounded fingers to scratch loose the mats.  As you can see the cat really likes getting rid of the loose fur.

Why do other places pet big cats?

There is only one reason that people post pictures of themselves touching big cats.  It is to show off.

They make all kinds of excuses for their egotistic behavior and say stupid things like:

Let’s expose these lies for what they are.

The cats get depressed if we don’t pet them.

Big Cat Rescue doesn’t allow petting and our cats live longer, happier, healthier lives than any where else on the planet.

No scientist has ever concluded such a ridiculous finding after doing any sort of real study.

If the cage is so small and barren that this is the case, then what the owner needs to do is give them more space, more places to enjoy, more enrichment and things the cat actually does want.

It helps them deal with captivity.

Why is it that the very people making such claims are the ones breeding or buying more cats for life in cages?

Nothing will make captivity an acceptable alternative for living free; least of all putting the person and the cat in danger.  Yes, the cat is in danger, because if the person gets bitten the authorities can insist that the head be cut off and tested for rabies, even if the person who was bitten doesn’t want them to and even if the cat is up to date on their rabies shots.

It makes people understand that they should be protected.

This is probably the most common lie.  The backyard breeders and exotic pet owners heard it from the zoos who have been using this lame excuse for their very existence.

In fact, studies have shown that when people are seen in close proximity to endangered species the reaction by the public is that they must not be endangered, or that wouldn’t be allowed.

The underlying message is that these animals can be tamed and treated like pets, so people buy them and pay to touch them and further the abuse, rather than treating them with respect.

What About Keith Richardson or Black Jaguar White Tiger?

This is the best article I’ve read about why these “lion whisperers” or self proclaimed “big cat experts”, are doing more harm than good.  It’s well documented with statistics, studies and common sense; and a great read as well:  Respect Nature. Don’t Pet It. Step Away From the Problematic Instagram Feeds. http://www.slate.com/articles/health_and_science/science/2017/01/animal_whisperers_present_a_problematic_way_of_seeing_animals.html

It fosters a desire to protect them in the wild.

Wrong!  Seeing people petting big cats makes people want to pay to pet big cats or to own them.  THAT is what the people who are promoting the petting are trying to foster; not real conservation.

They have to encourage cub petting to raise the money to feed the adult cats.

It’s hard to believe that anyone falls for this excuse because it is just so lacking in common sense.  How crazy is it to keep breeding more big mouths to feed if you can’t feed the big mouths you already bred and exploited?  That is a situation that is doomed to end in disaster and anyone who participates in it, is equally responsible for the misery and suffering that will surely ensue.

This video, captured from our live explore.org/bigcatrescue web cam, in the Vacation Rotation enclosure, by Susann Mesna, illustrates two of the most common questions I hear.  First is, why can’t they have a friend live with them and the second is, don’t they want to be petted.  Big cats are solitary by nature, so the vast majority of our cats prefer to live alone, and do.  These tigers are siblings who are neutered and spayed and have lived together for 20 years.  We have to separate them at feeding time so they don’t kill each other, but the rest of the time they get along pretty well and seem to prefer being together.  As you can see though, things can get ugly pretty quickly and there is no way to break up a tiger fight.

Notice how Arthur keeps rubbing his cheek on the wall of the cage?  When people see our cats do that near us, they usually assume the cats are asking to be petted.  Nothing could be further from the truth.  The cats are marking their territory and daring us to cross the line.  In this video Arthur is trying to move Amanda away from the wall so he can attack her from behind.  He’s telling her, “This is my territory and this is my wall; back away from it!”  She’s too smart for that ploy though. 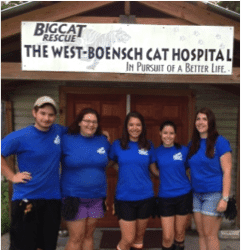 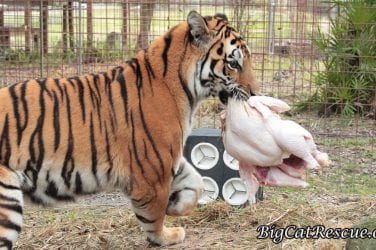